Chipotle Mexican Grill (CMG 0.47%) had a pretty fantastic fourth quarter by pretty much every metric. Sales increased at a solid clip, and a big increase in sales and transactions from restaurants open more than one year -- known as comp sales -- delivered a big boost to the burrito chain's profits.

With customer traffic finally starting to increase again after nearly a year of declines, Chipotle is set up for what could be its best year in almost a half-decade.

However, if there's one metric that took a surprisingly negative turn for Chipotle in 2018, it was restaurant count. While the company said heading into fiscal 2018 that it was intentionally slowing the pace of new restaurants it would build, nobody expected to see it close nearly 50 existing locations over the course of the year. 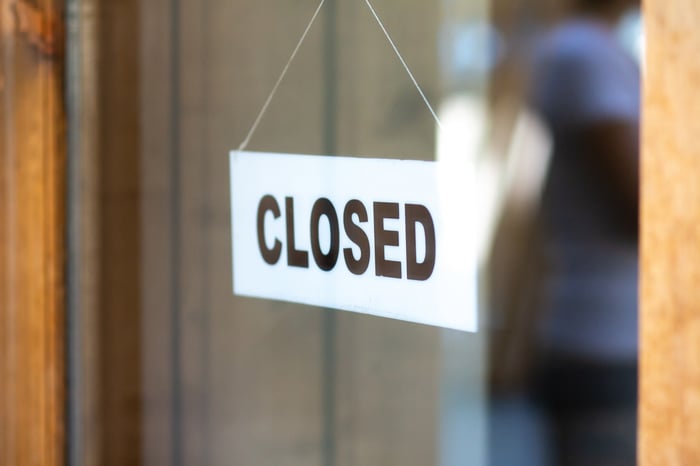 The end result was a net addition of 83 locations, easily the smallest increase in well over a decade. Let's take a closer look at the implications.

For years, it seemed people couldn't get enough of Chipotle. The company, best known for its use of fresh ingredients, and for offering local and organic options as often as possible, grew its restaurant base at an incredibly rapid pace over the past 15 years.

At the start of 2005, the company had 409 total locations and would finish the year with 489, the last time it opened fewer than 100 net new locations in a calendar year. It was also Chipotle's last year as a private company, going public in early 2006.

Over the next 11 years, Chipotle would open an average of 161 net new restaurants every year, more than quadrupling its restaurant count from 489 to 2,250 by 2016. In the last five years of that period, it never opened fewer than 180 net new restaurants in a single year.

Over that period, Chipotle's financial results were incredible. The company grew sales by 517%, while increasing earnings per share a remarkable 1,510%: 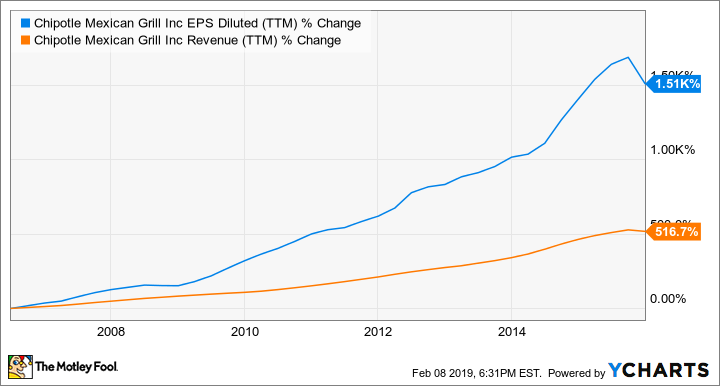 The stumble it's still recovering from

In October 2015, Chipotle was hit with one of the worst food-borne-illness incidents in years, when dozens of customers at multiple restaurants in several West Coast states became sick after contracting E. coli from contaminated Chipotle food.

Management acted quickly to implement food safety and preparation steps to reduce the risk of food-borne illness, but before those efforts could take hold, it was blindsided by a Norovirus incident in Boston barely a month later.

Chipotle would end the fourth quarter with comparable sales down almost 15%, but the worst was yet to come. Sales would fall an excruciating 23% in the first quarter of 2016, and the company would report its first-ever quarterly loss. And while it did quickly rebound into the black, the company hasn't come close to recapturing its former profitability, either. 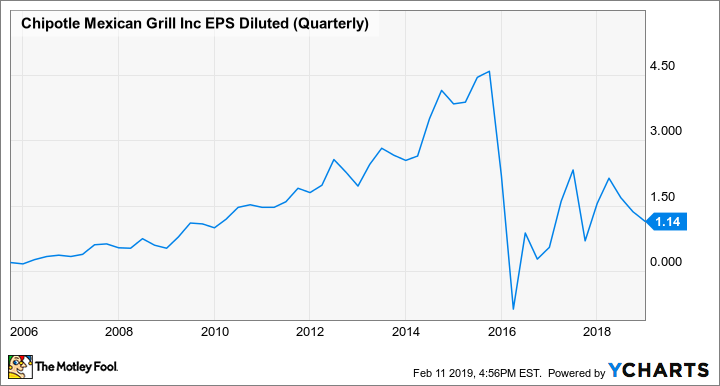 As a result, Chipotle's stock price would lose more than two-thirds of its value from the 2015 peak to the lows in early 2018.

And it wasn't just the Chipotle brand that's suffered. The company has all but ended its efforts to expand into other categories, having closed all 15 of its ShopHouse Asian-themed locations in 2017 and shuttering its single TastyMade burger restaurant and five Pizzeria Locale restaurants in 2018.

Why does all this matter? In short, because unit economics are incredibly important in the restaurant business. Once enough sales to cover fixed costs like occupancy are reached, incremental sales above those levels are far more profitable for Chipotle. While the per-unit numbers have trended better, management has made it clear that it has work ahead of it to return to its peak levels of sales and profitability.

A step back to move forward

Since taking over as CEO about one year ago, Brian Niccol has made the things that drive profitable growth his key focus. On one hand that might sound painfully obvious, and something every CEO says.

But Niccol is keeping things simple. First, he's investing in technologies such as digital ordering, delivery partners, and second make-lines, to increase the number of sales each Chipotle gets and can still fulfill quickly and with high quality. Second, he's focusing on continually testing new food items to spark interest from casual and lapsed customers, and to keep the menu fresh. Third, he aims to keep restaurant operations as simple and customer-focused as possible.

Niccol's track record as CEO of Taco Bell shows he knows how to turn around a chain that's lost luster. And part of the way he's chosen to start that process at Chipotle was to strip off the extraneous restaurant brands in development and to also clean house on unprofitable Chipotle restaurants, too.

Chipotle may not return to opening restaurants at a pace of more than 10% of its base ever again. Plans this year call for 140-155 new locations, or about 6% growth.

But it doesn't have to grow its base at a high rate to deliver strong earnings growth. Chipotle's past has already made it clear: Incremental sales at an existing Chipotle deliver more profit growth than sales at new locations.

At some point, new restaurant growth could accelerate again. But for now, investors should be pleased that management is working harder to drive growth from the existing restaurant base.