Please ensure Javascript is enabled for purposes of website accessibility
Log In Help Join The Motley Fool
Free Article Join Over 1 Million Premium Members And Get More In-Depth Stock Guidance and Research
By Brian Stoffel - Updated Apr 25, 2019 at 10:26AM

Revenue growth was nice, and so is the acquisition. But that wasn't the real story.

These days, every subindustry needs a software-as-a-service player. The business model is powerful, and the long-term economics are an investor's dream. The education sector has a bona fide leader in Instructure (INST). The company has a cloud platform for educational institutions, called Canvas; a tool to measure student progress in real time, called Gauge; a platform for employers to educate their workers, called Bridge; and a video-based learning tool, called Arc.

Fourth-quarter earnings showed solid growth on the top line and a new acquisition. But most importantly, the company showed remarkable leverage, giving investors hope that profitability may come sooner than expected. 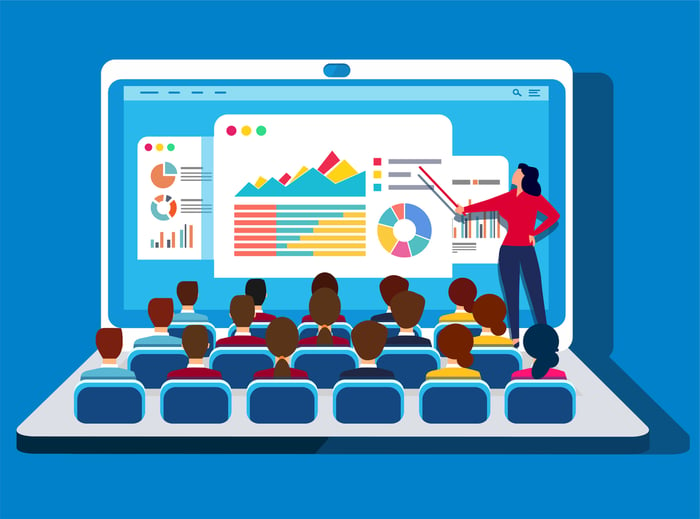 Let's first look at how the company performed during the fourth quarter from a high level.

Recurring revenue, which backs out the low-margin service revenue that comes from onboarding schools and companies to Instructure's cloud, also grew 26% to $51 million.

What's really impressive is this: While revenue grew 26%, operating expenses grew just 7%. Under the guidance of new CEO Dan Goldsmith, Instructure has been focusing intently on streamlining spending decisions and cutting costs. Those decisions have obviously paid off. Sales and marketing spending, for instance, grew just 8% after backing out stock-based compensation, which demonstrates impressive leverage in getting customers in the door.

One area to keep an eye on is research and development spending. R&D increased just 1% from last year. While cutting expenses is good, shareholders don't want to see Instructure trading in future growth potential -- which needs R&D dollars to develop -- for short-term profitability boosts.

That said, Goldsmith outlined major growth initiatives for the year ahead that will no doubt help address those concerns. More on that in a moment.

Perhaps most important was that net revenue retention remained above 100%. What that means is that schools and companies that sign on to Instructure's platform are staying with it. It is sticky and reliable, and represents a growing moat around the company.

While this won't be an exhaustive list, Instructure announced a number of customer sign-ons of note. For the Bridge platform, these included:

The Canvas platform also announced a number of new customers, including:

Management made it clear, however, that new customer bookings for Canvas in the United States were getting harder and harder to come by as Instructure grabs more of the market.

Instructure also announced that it will acquire Portfolium. The company has been a partner of Instructure's for a number of years, so the two know each other quite well. Portfolium focuses on showcasing student work through an "ePortfolio" network. In plain English, it's a more comprehensive way of demonstrating what a student is possible of beyond just grade point averages or test scores.

The deal has yet to officially close. But when it does, Portfolium will bring along the 4.6 million students; 40,000 educators; 3,600 high schools, colleges, and universities; and 200-plus partner institutions it works with.

Goldsmith teased that the company has six major growth initiatives to tackle in 2019. He was willing to share only three of them.

And if you want hard numbers, Instructure provided the following guidance for the quarter and year ahead.

To put these figures in perspective, first-quarter and full-year revenue are expected to grow by 19% and 23%, respectively. First-quarter earnings, on the other hand, are expected to show losses that narrow by 30%,  while full year losses will essentially be the same.