These days, every industry has its software-as-a-service (SaaS) play. Instructure (NYSE:INST) started out as purely an education play; its Canvas and Arc tools allowed for learning and collaboration via the cloud. Its Bridge tool, however, is focused on helping companies quickly train and evaluate employees.

As you'll see in the details below, that second focus -- on companies -- is getting more and more important. While the earnings the company released this week were relatively ho-hum, the exciting tidbits were buried in the details. 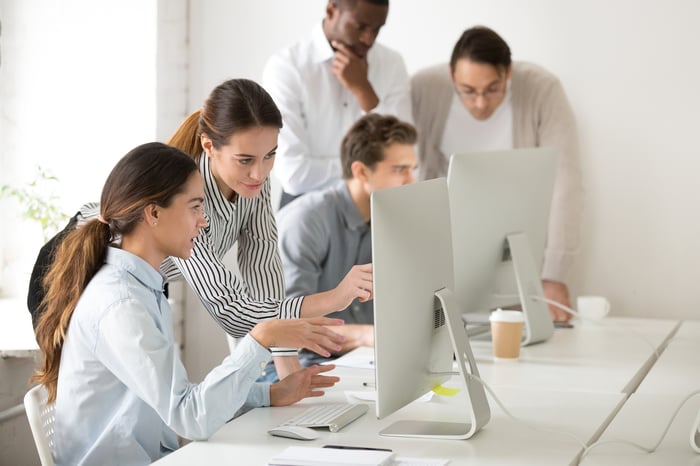 Before we get into the nitty-gritty, let's look at how Instructure performed on the headline numbers.

This is a mixed bag if ever there were one.

Let's start by highlighting the growth in subscription revenue, the real driver of long-term value. This detail is often skewed by professional service revenue. This second line of sales is basically customers paying Instructure for help in installing software and training people on the interface. Instructure gives it away for very low margins.

While the slight margin compression might raise a few eyebrows, Instructure showed very strong leverage during the quarter. While subscription revenue jumped 23%, non-GAAP operating expenses were up just 9.6%. It cost the company less and less to serve its customers, which should be great news for long-term investors.

And as far as free cash flow is concerned, that was primarily impacted by the acquisition of MasteryConnect, which came on the heels of the Portfolium acquisition earlier in the year.

The company announced several different wins in its different business lines. One huge difference this time around is that management highlighted the company Instructure was replacing at many of its institutions -- a direct shot across the bow for these competitors.

Bridge, on the other hand, had wide-ranging contracts signed, including:

Dealing only on headline numbers, Instructure made very slight revisions to its revenue guidance (upward) and non-GAAP earnings (downward).

But there are two important details from the prepared remarks which are worth noting.

First, the company said its DIG artificial intelligence and machine learning tool is progressing, but is not expected to be available in the immediate future. More importantly, new CEO Daniel Goldsmith highlighted growing connections between the company's higher education clients and its enterprise clients, saying, "Corporations have long hired university-trained talent, bringing new professionals to fuel growth. Most recently, corporations have been turning to university partners... These forces are creating an unprecedented ecosystem of change that is right in Instructure's sweet spot."

Instructure's primary moat has always come in the form of high switching costs. Once schools and companies adopt a platform -- especially when that platform can be updated via the cloud in real time -- that revenue is very sticky.

But if companies and schools start using Instructure -- particularly its measurement tools -- in tandem, that would also help the company benefit from network effects. Companies that want access to evaluative data would need to use the same platform as schools, and vice versa.

If Instructure could engage that flywheel, it would be a huge deal for investors. And it's an important detail long-term shareholders should pay close attention to in the quarters ahead.