But perhaps of most interest for investors was the fact that Instructure remains on track to be financially sustainable. Despite two rather large acquisitions this year, management still believes the company will be breakeven in free cash flow for the year. With Instructure's shrinking war chest of $48 million, that should be music to Wall Street's ears. 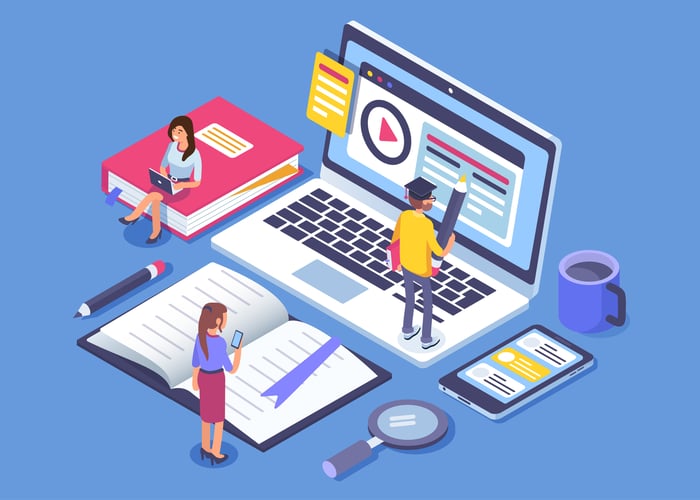 Before getting into the details, however, let's review the headline numbers.

Revenue from subscription services -- where the real long-term growth lies -- grew at 27%, faster than revenue overall. But what was really impressive was the leverage that Instructure continued to show. While revenue jumped 26%, operating expenses increased just 14%. This underlies why management is so confident the company can be breakeven on free cash flow for the year. The huge investments in software and infrastructure have been made. Now, adding each incremental client costs next to nothing for the company.

Also of huge import was the fact that CFO Steve Kaminsky said net revenue retention was above 100%. This means that the existing base of customers from one year ago provided more revenue this year. By filtering out the effect of new customers, we see that not only are customers staying on, but they are also paying more as time goes on. This is a key sign that Instructure benefits from high switching costs: As schools and companies get more familiar with Instructure, they are loath to switch. It costs lots of money, requires training enormous staffs, and is a headache in general.

With its recent acquisitions, Instructure now has several platforms to report on. First, we'll tackle Canvas, which is the core learning-management system for schools. During the quarter, Instructure added:

On the Bridge platform -- which offers a way for employers to teach and develop their workforces -- there were several wins, including contracts or expansion with:

As stated earlier, management remains confident that Instructure will end the year with break-even free cash flow. So far this year, the company has lost $55 million in free cash flow -- so it expects to make at least that much in the next six months. That timing isn't too surprising, as schools normally pay their subscriptions at the beginning of academic years.

Management also offered up revenue and non-GAAP (adjusted) earnings forecasts. The midpoints of the third-quarter outlooks showed estimates of $68 million and a loss of $0.19 per share, respectively. If the company hits those numbers, it would represent revenue growth of 23% with the loss expanding 27%.

For the full year, management expects revenue to come in at a midpoint of $259 million with a loss of $0.61 per share. That would represent full-year sales growth of 23% with the company's loss being virtually flat.

But by far, the biggest thing for investors to watch is whether Instructure can generate the needed $55 million in free cash flow over the next six months.