Please ensure Javascript is enabled for purposes of website accessibility
Log In Help Join The Motley Fool
Free Article Join Over 1 Million Premium Members And Get More In-Depth Stock Guidance and Research
By Lou Whiteman - Updated Apr 17, 2019 at 10:38AM

Are asset sales on the horizon?

Activist investor Dan Loeb was a key figure in pushing industrial conglomerate United Technologies (RTX 1.80%) to split into three independent entities. Now, he wants the company to go a step further and seek a buyer for one large unit.

Loeb's hedge fund, Third Point Management, established a stake in UTC in late 2017 and last May went public with its argument that the company's parts would be worth more on their own than as part of the combination. United Technologies management in December signed off on that conclusion, announcing plans to create three entities around its aerospace unit, Otis elevators, and its Carrier HVAC unit.

Loeb in Third Point's quarterly letter dated Feb. 21 cheered that decision but bemoaned confusion surrounding the initial announcement. He said management has largely rectified the issues by shortening the time to separation and clarifying free cash flow, but he urged United Technologies to better explain the cost profiles of the different businesses and to "explore a highly value-creating transaction for Carrier."

Interestingly, the activist said he believes UTC management is "receptive to these suggestions." 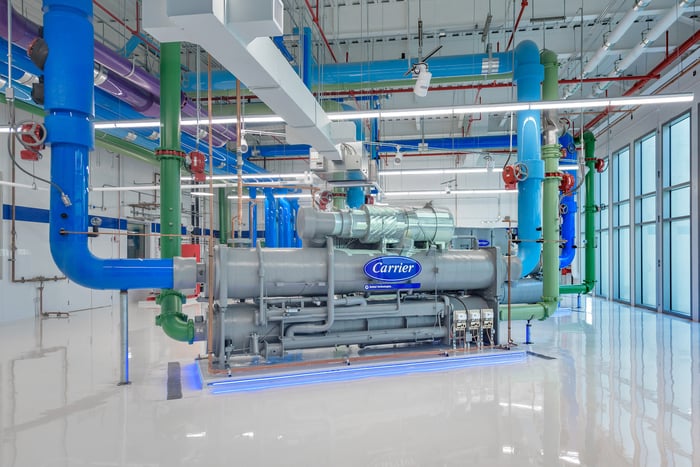 A sale of Carrier instead of a spinoff would be a significant deviation from the planned course and would require overcoming several hurdles to be completed. Here's a look at the prospects of a Carrier deal, and what it might mean for United Technologies' plans.

Carrier is one of a number of major players in the HVAC industry, but few of those competitors would seemingly make a good fit for both Carrier and United Technologies. A Carrier spinoff would be tax-free to United Technologies and its shareholders, and would therefore likely be a better option than an asset sale, which would be a taxable event.

The obvious workaround would be a reverse Morris trust transaction, a deal structure that has been used by a number of large industrial companies in recent years including Lockheed Martin and Fortive. A reverse Morris trust allows a company to slice off a subsidiary and immediately combine it with a similarly sized competitor free of taxes.

Should UTC explore this path, a merger with Johnson Controls (JCI 2.07%) appears the most likely option. In December, I estimated Carrier's stand-alone value would be about $30 billion, which is about Johnson Controls' market capitalization. And the two HVAC businesses have similar earnings from HVAC and building controls as well.

The other option, for a strategic buyer to offer United Technologies a massive premium that would make a sale the better option even after taxes are considered, seems unlikely. A merger with Ingersoll-Rand's (TT 2.70%) Trane business would make a lot of sense but would run into significant regulatory issues. And Ingersoll-Rand, after earlier this month spending $1.45 billion to acquire an unrelated business, probably isn't looking to do a massive HVAC deal at this moment.

Another publicly traded competitor, Lennox International (LII 1.45%), is likely too small to attempt either a reverse Morris trust or outright purchase of Carrier.

I have zero doubt Loeb's thoughts on Carrier will be taken seriously inside the UTC board room, but I wouldn't assume the unit will be sold instead of spun out. It takes two to tango, and it's far from certain Johnson Controls is interested at this moment in bogging down its operations with a complex transaction. The company is flush with cash after selling its car battery business for $13.2 billion last fall, but it could prefer to focus internally for now instead of committing to yet another transformative transaction so soon.

United Technologies ran into unanticipated regulatory issues that delayed the closing of its acquisition of aerospace electronics manufacturer Rockwell Collins, and likely delayed the company's announcement of a separation plan. Management is focused now on getting the separation completed as quickly as possible, and indeed won praise from Loeb and analysts for speeding up the timetable to completion.

The company has underperformed the S&P 500 over the past five years in part because it has been bogged down by transaction-related uncertainty through much of that time. 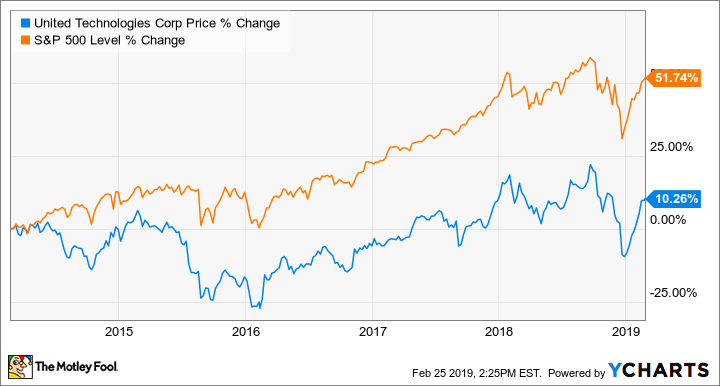 Adding additional layers of doubt that come with a complex transaction would only serve to slow the process down. My bet is that while UTC CEO Gregory Hayes might be open to discussions about a deal, it would take a blockbuster offer for him to pull the trigger. And it's hard to imagine such an offer materialize.

United Technologies' planned separation is an important step in the right direction that existing shareholders should support. By my own calculations, UTC's sum-of-the-parts valuation could be upwards of 20% above the company's enterprise value at the time of the split announcement.

But even in its simplest form, the split is a complex and time-consuming process. United Technologies currently expects to be operationally ready to complete the spinoffs by year-end but says the deals might not happen until May 2020 while it awaits tax rulings for its 1,200-odd legal entities and works out other fine print. A sale of Carrier would only further complicate that process. During the wait, an operational stumble or a turn in the business cycle could greatly change the outlook for one or all of these three soon-to-be-independent companies.

By May 2020 at the latest, investors will be able to choose between three distinct, focused businesses with different free cash flow and growth profiles, all tied to different end markets. They'll also get to make that choice with insight into how the overall economy and the aerospace and construction industries have fared that is not available today.

Spin or sale, potential investors would be best served watching from the sidelines.