At this point, it should be pretty clear that Apple (NASDAQ:AAPL) won't be among the first smartphone makers to ship devices with 5G wireless connectivity. According to wireless chipmaker Qualcomm, there are more than 30 smartphone designs utilizing its Snapdragon processors paired with its first-generation 5G modem, known as the Snapdragon X50.

In fact, we've already seen some such devices announced, like the Samsung Galaxy S10 5G, an ultra-premium variant of the company's Galaxy S10 product line with a bigger screen, a fourth rear-facing camera, and 5G connectivity. 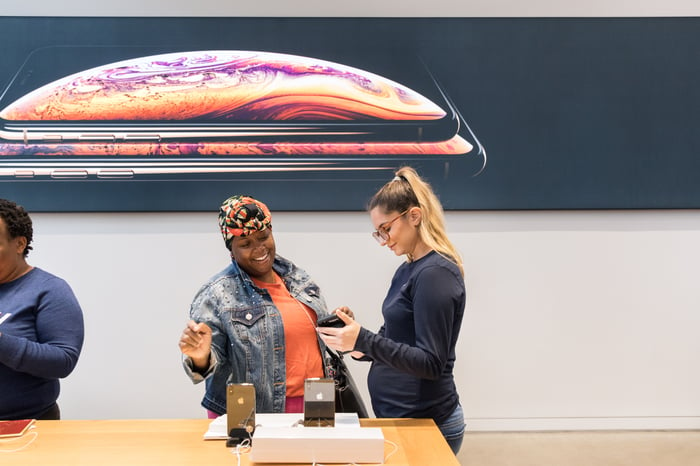 Apple, on the other hand, isn't expected to ship its first 5G-capable iPhone until the second half of 2020. The iPhones that Apple will launch later this year are expected to incorporate faster 4G LTE Advanced technology than what's available in its current iPhone lineup.

The question that investors in Apple might wonder is this: Will Apple being late to 5G prove a problem for the company over the course of its next iPhone product cycle? Let's take a closer look at the situation.

There's no escaping the fact that Apple will lack the 5G marketing point that its many competitors will have, particularly in the first half of 2020 when phones based on Qualcomm's upcoming 5G-capable applications processor roll out in significant volumes. (I expect the X50-based products to be relatively low-volume halo devices, just like the Galaxy S10 5G.)

Apple's job will be to make sure of two things. First, it needs to roll out an attractive and (save for the lack of 5G) competitive lineup in the second half of 2019. This means that the company needs to be able to offer consumers compelling features beyond wireless connectivity, such as cutting-edge cameras, impressive screen technology (say, for example, the ProMotion screen technology that's currently available in the company's iPad Pro lineup), and of course, best-in-class mobile chip technology.

Second, the company will probably need to be more aggressive about conveying the benefits of its devices relative to what the competition has to offer.

To be clear: Apple has pit flagship iPhones against devices with superior cellular modem technology in the past and has been successful in doing so. (In fact, even today, Apple's latest iPhones are behind the curve in terms of modem technology.) The key difference this time around is that the move to 5G will probably be easier to market to average consumers than the various advances that we've seen in 4G LTE.

On top of that, Apple is facing an entire wireless ecosystem -- including wireless chipmakers poised to profit from the 5G transition to device makers looking for every marketing edge they can to sell customers on new devices, and if they can, gain share from Apple while doing so. That's betting on 5G being a big deal. A big marketing battle is brewing here.

Once Apple makes it through to its 2020 product launches, the 5G headwind should become a tailwind. Rather than trying to minimize the fact that it isn't selling 5G-enabled smartphones, it'll likely be very loud about the fact that it now is and will probably do everything it can to convey to prospective customers the benefits of that technology.

Indeed, with iPhone upgrade cycles lengthening, Apple will certainly want to use every tool in its tool chest to get customers to upgrade. The addition of 5G should be a solid marketing point and the rumor mill suggests that Apple will move entirely to more advanced organic light emitting diode (OLED) screens for its 2020 iPhones.

The point, though, is that things should get easier for Apple's iPhone lineup for a number of reasons, beginning with the launch of its new devices in the second half of 2020.