Following some quiet hardware announcements, the Mac maker's big event next week will focus on services.

Apple (AAPL 0.20%) has taken a somewhat unusual approach to announcing hardware updates so far this spring. Despite the fact that the Mac maker is hosting an event next Monday, it quietly updated its iPad lineup yesterday, bringing back the iPad Air and giving the iPad Mini a much-needed spec bump. Apple this morning similarly said it was refreshing the iMac.

There might even be another hardware update tomorrow, too. 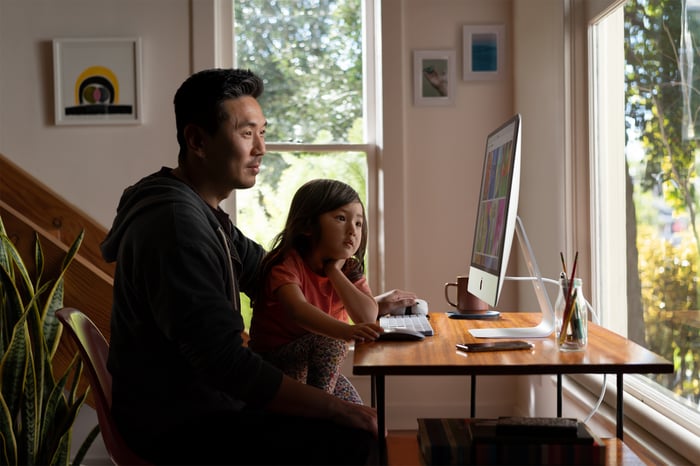 As far as the iMac refresh goes, it was a pretty standard internal spec bump with no meaningful redesign of the form factor. Apple is adding eight-core Intel ninth-generation processors and AMD Radeon ProVega graphics to its flagship 27-inch all-in-one desktop. The smaller 21.5-inch iMac is getting quad-core or six-core eighth-generation chips from Chipzilla.

The current iMac design has been in use since 2012, and it's been nearly two years since Apple last updated the iMac lineup's internals. It's a fairly standard and relatively uneventful refresh.

Third time this week's the charm?

Meanwhile, MacRumors reports that a new iPod Touch refresh could be unveiled as soon as tomorrow, citing a "tip earlier this month" predicting daily announcements for this week that has thus far proven accurate. A refresh to the entry-level iOS device has been rumored in recent weeks, and the iPod Touch was last updated in 2015 -- around the same time that the iPad Mini was last updated.

While the iPod Touch hasn't been financially important for a long time, it still serves as a sort of gateway product into Apple's iOS ecosystem, particularly for younger users that Apple wants to get hooked early. The $200 device is a popular gift to younger users from parents that don't want to pay for another line on their cellphone plans. Those users often end up getting iPhones later on.

iPod Touch sales are included in Apple's new wearables, home, and accessories segment, which replaces the previous Other Products catch-all.

The low-key approach to hardware announcements could even serve as a a nod to Apple's ongoing emphasis on its services business. The company has been trying to downplay the significance of hardware, culminating in the decision to no longer report unit sales, while playing up its growing and highly profitable services business by disclosing gross margin data.

The event next week will showcase the video-streaming service that Apple has spent years and billions of dollars building. The rumored premium news subscription service will likely be unveiled as well.

"As you know, we hired two highly respected television executives last year and they have been here now for several months and have been working on a project that we're not really ready to share all the details of it yet, but I couldn't be more excited about what's going on there and we've got great talent in the area that we've sourced from different places and feel really good about what we will eventually offer," CEO Tim Cook said last August in the first official confirmation of the video-streaming service.

Investors will find out what exactly Apple is offering next week.