Volkswagen AG (VWAGY -1.39%) has signed a deal to develop a new pickup truck with Ford Motor Company (F -7.61%), a VW executive said, and the two automakers may soon agree to cooperate on mobility services and autonomous-vehicle technology.

While Volkswagen and Ford confirmed last year that they are exploring a "strategic alliance" and said in January that a pickup and some commercial vans are in the works, it hasn't been clear exactly what else their alliance will entail.

The remarks by VW's commercial-vehicles chief, Thomas Sedran, reported by Reuters, are a signal to investors that a number of possibilities are still under discussion -- and at least one now seems to be nailed down.

About that jointly developed pickup

While it's not familiar to most Americans, Volkswagen's commercial-vehicles division has offered a midsize pickup called the Amarok in some regions since 2010. The Amarok competes against trucks like Toyota's Hilux and Ford's Ranger in South America, Europe, and a few other regional markets around the world. Like the Ranger, it's available in several versions ranging from a simple work truck to a personal vehicle with some off-road ability. 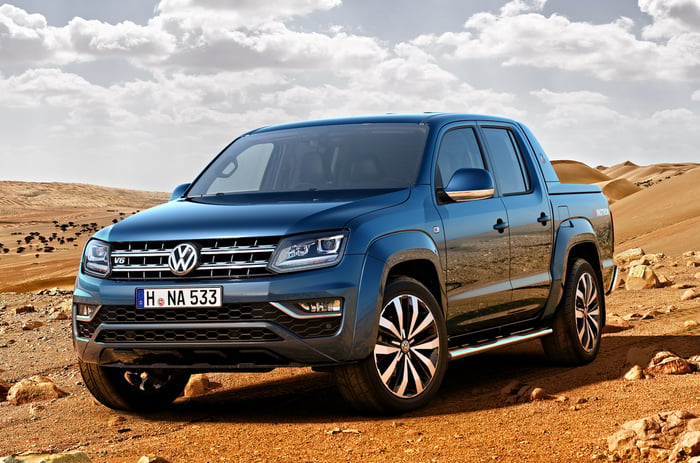 The current Volkswagen Amarok pickup dates to 2010. VW will look to Ford for help with its successor. Image source: Volkswagen AG.

The Amarok has sold fairly well for what it is, but it's not a big seller by VW's global standards -- and while it was refreshed for 2017, it's getting long in the tooth. But VW has been understandably reluctant to spend the money needed to develop an all-new truck that could compete with the Hilux, which is a huge seller globally, and the Ranger, which benefits from Ford's deep experience with pickups in the United States.

VW has apparently decided that if it can't beat Ford, it should team up with Ford. Sedran told Reuters that the next-generation Amarok will be jointly developed with Ford. That strongly suggests that the new Amarok will use the Ranger's platform and that it might well be built by Ford in the United States under contract.

(Don't get too excited, truck fans: While the Ranger-based Amarok will probably compete directly against the Ranger in some markets, I suspect that Ford and VW will agree that it won't be sold in the United States. It's possible that it won't even be built here: VW could choose to build it under license elsewhere. It's even possible that Ford could ask VW to build Rangers on the same assembly line, for sale in South America or other global markets.)

Check out the latest earnings call transcripts for Ford and other companies we cover. The next Amarok might be based on the architecture of the Ford Ranger. But where will it be built? Image source: Ford Motor Company.

Will the VW-Ford partnership expand to self-driving cars and EVs?

The pickup isn't exactly a surprise. VW and Ford said in January that they had agreed to jointly develop a midsize pickup, as well as commercial vans for global markets that would arrive starting in 2023. At that time, the partners said that they would "investigate collaboration" in other areas, including autonomous vehicles, mobility services, and electric vehicles.

There has since been some movement on at least one of those fronts. The Wall Street Journal reported last month that VW is planning to invest a total of $1.7 billion in Argo AI, the Pittsburgh-based self-driving start-up that is working on software for Ford's upcoming Level 4 self-driving commercial vehicle. Ford bought a majority stake in Argo AI in 2017.

As reported by the Journal, the deal would make Argo the center of a 50-50 joint venture between Ford and VW in which both automakers could invest additional money in time. The Journal reported that VW would invest about $600 million to take an equity position in Argo, adding an additional $1.1 billion in working capital to match Ford's investments to date. But neither Ford nor VW confirmed the report on the record.

Sedran didn't confirm the report in his remarks to Reuters. But he did say that VW is in "constructive talks" with Ford about taking a stake in Argo. He also said that the two companies are still discussing a joint venture around mobility as a service, though he gave no details.

But it's still not clear whether Ford and VW have come to any agreement around electric vehicles. VW has developed a sophisticated modular electric-vehicle architecture that can underpin many different types of vehicles, and there was some speculation that Ford might license that architecture for its own electric models. But as of right now, there are no signs of movement on that front.

The upshot: This isn't a big deal, but it could lead to one

Given that the current VW Amarok doesn't exactly sell in huge volumes, it's unlikely that its Ford-VW successor will bring big improvements to either company's bottom line. But the news is important because it shows that the two companies are still talking -- and that some much bigger possibilities remain on the table.