You could almost say that solar stocks have been "eclipsed" by other energy investments over the past year. While the overall energy sector, as measured by the SPDR Energy Select Sector ETF, has been essentially flat (down just 0.5%), many solar stocks are down by double-digit percentages over that time frame.

But when prices are down, it can be time to go bargain hunting, or at least time to keep an eye on the sector. We asked three of our Motley Fool contributors what solar stocks they're keeping on their watchlists right now. They came back with First Solar (NASDAQ:FSLR), SolarEdge Technologies (NASDAQ:SEDG), and TerraForm Power (NASDAQ:TERP). Here's why they think you should have these solar companies on your radar screen. 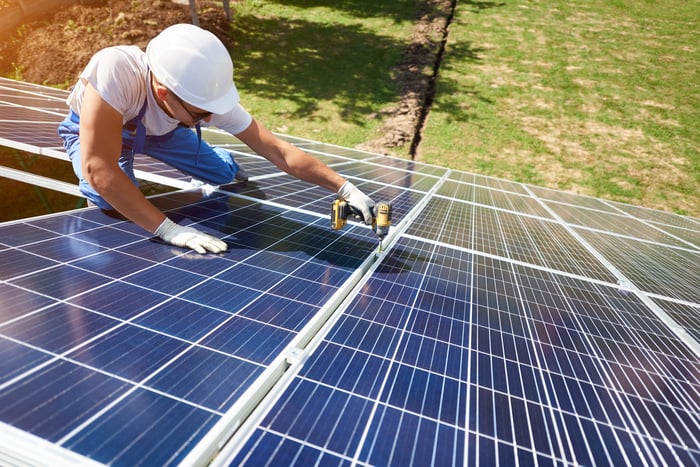 Some of the best solar companies have seen their shares underperform over the past year. Image source: Getty Images.

Could this solar star burn out?

Rich Smith (First Solar): It's been four months since I named solar specialist First Solar a top solar stock to watch back in November, and so far, the markets have smiled on this prediction. First Solar stock is up a rollicking 28 percentage points -- but could it be time to count your winnings and exit the stock?

I think so. In fact, First Solar might be a solar stock to watch out for going forward. Here's why:

Last month, First Solar ended up underperforming even its own muted expectations for 2018, earning only $1.36 per diluted share on sales of less than the forecast $2.3 billion. Cash burn rates are up, exceeding $1 billion in negative free cash flow last year. Cash reserves are down $440 million from the end of 2017, long-term investments are nearly gone as well, and long-term debt levels are on the rise.

On top of all that, First Solar gave some disturbing guidance in its last conference call, reducing expectations for gross margin, predicting "a loss in the first quarter, as well as low earnings in Q2," and pushing "the majority of earnings" into "the second half of the year" (which may happen, but may also not happen).

Frightened analysts have ratcheted back profit growth predictions to just 10% per year going forward -- kind of slow for a stock priced at 22 times earnings -- yet investors have bid First Solar stock up after earnings, not down.

My advice: Watch out for First Solar. This stock is starting to look dangerously overpriced.

Check out the latest earnings call transcripts for First Solar and other companies we cover.

The solar company that isn't

John Bromels (SolarEdge Technologies): SolarEdge is in the midst of a transformation, one that might just be coming in the nick of time.

Here's what I mean: For years, SolarEdge has outperformed the broader solar industry, thanks largely to the fact that it doesn't manufacture solar panels. Instead, SolarEdge makes photovoltaic inverters and power optimizers. These are key components of solar systems that convert power from solar panels to usable AC electricity and help the panels run at peak capacity.

Although SolarEdge is one of the top producers in its niche, investors have reasons to be worried. Major panel manufacturer SunPower recently began including microinverters in its panels. If this becomes an industrywide trend, demand for SolarEdge's inverters could take a hit.

If SolarEdge can successfully integrate all these businesses into a one-stop solution for a solar energy/battery storage/car charging system -- essentially an "everything but the panels" solar installation -- it could be a game-changer. But for now, that's just a possibility, so I'm not suggesting you should jump into the stock based solely on that dream. That said, with a share price and a valuation that's been dropping recently, SolarEdge is a "solar" stock to watch.

New management's plans are proving out

Tyler Crowe (TerraForm Power): It has been a little over a year since TerraForm Power was brought under the Brookfield Asset Management (NYSE:BAM) umbrella. Becoming a part of the Brookfield family of companies was one of the major drivers for any investment thesis for this once-troubled collection of solar and wind assets. The theory went that Brookfield would be able to use its access to capital to strengthen the balance sheet and squeeze out some of the operating inefficiencies the previous operator had not.

One year later, it looks as though Brookfield has made some significant progress. TerraForm has signed new long-term service agreements that will reduce operating expenses by $20 million annually, it has implemented a new solar performance improvement plan that will generate an additional $11 million in revenue from existing assets, and it has signed new production guarantee contracts that will add $15 million in annual revenue. Those adjustments alone add up to an additional $46 million in operating income from its existing assets, let alone any investments in new growth or annual rate hikes. These moves, in addition to some refinancing, has led to improved credit ratings as well, which will make it cheaper to borrow for future growth.

All of these efforts combined with some modest growth puts TerraForm Power on pace to grow its payout by 5% to 8% annually between now and 2022. That type of growth has been par for the course for almost all of Brookfield's other publicly traded assets, and it has worked out wonderfully for shareholders over the long run. If this is what we can expect from TerraForm Power over the long haul, then investors should certainly have this company on their radar.