Apple's (AAPL 0.19%) senior director of platform architecture, Gerard Williams III, recently left the company after nine years according to CNET. Williams led the development of each Apple processor core from the A7 to the A12X Bionic.

Williams' primary job was the development of Apple's custom CPU cores, but he also oversaw the layout of its SoCs (system on chips) -- which bundle together the CPU and GPU -- after its SoC architect Manu Gulati left two years ago. Williams is the inventor of over 60 Apple patents related to power management, memory compression, and multicore processor technologies. He previously worked at ARM Holdings, which licenses its chip designs to Apple, Qualcomm (QCOM 0.25%), and other mobile chipmakers. It's unclear why Williams left, but his exit comes at a pivotal time for Apple, which is trying to reduce its dependence on third-party chips and produce more first-party components.

Most smartphones in the world run on Qualcomm's Snapdragon SoCs. But Apple produces custom ARM SoCs for its iPads and iPhones for four reasons: to differentiate its products, to maintain tighter control over its products' hardware and software, to simplify its supply chain, and to cut production costs.

The launch of the A7 in 2013 was a breakthrough for Apple, since it was the world's first 64-bit mobile ARM SoC. Qualcomm followed suit with its own 64-bit SoC, the Snapdragon 410, but the chipset performed poorly and reinforced Apple's chipmaking lead.

The A-series SoCs continued to evolve under Williams' watch, with faster CPUs and GPUs as well as more power-efficient designs. However, Qualcomm eventually got its act together, and recent benchmarks indicate that its high-end Snapdragon 855 SoC nearly matches Apple's A12X Bionic in single-core and multi-core performance. Williams' departure could make it tougher for Apple to maintain that slim lead.

Qualcomm isn't directly competing against Apple in the SoC market, but the Snapdragon 855 makes high-end Android devices like Samsung's Galaxy S10 appealing alternatives to Apple's iPhone, which is struggling with longer upgrade cycles and tougher competition. 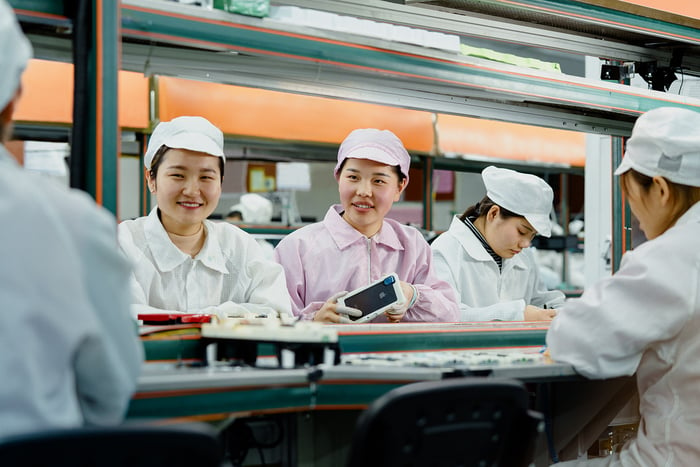 Cutting suppliers out of the loop

The A-series chips represent the opening chapter of Apple's plans for first-party components. Apple also cut other suppliers out of the loop by producing its own Bluetooth chip for its AirPods and security chips for storing biometric data. It's also developing its own GPUs, modems, and power management chips. All these efforts should boost its long-term gross margins.

The development of its own modems is a top priority for Apple, since it's currently engaged in legal battles with its previous supplier, Qualcomm, over its licensing practices. It's currently using modems from Intel (INTC -0.80%), which are slower than Qualcomm's and aren't quite ready for 5G networks.

Apple could also replace Intel's x86 CPUs with custom ARM SoCs in its Macs in the near future. That could be a tough task, since many Mac applications are optimized for x86 CPUs, and similar efforts to convert Windows PCs from x86 to ARM CPUs caused a myriad of performance and compatibility issues. Williams, who guided the A-series SoC evolution into a chipset which delivers PC-like performance on the iPad Pro, could have helped (or even led) that effort.

Investors shouldn't sell their shares of Apple based on this news, since Williams' successor will also likely be a seasoned industry veteran. But they should still keep an eye on Apple's new SoCs and see if they fall behind Qualcomm's comparable chips, and whether or not the company still plans to produce more of its own components to boost its margins.