These two companies are both major components of the hot payments industry, and value and growth investors will probably differ over which to favor.

The payments industry has seen great change and consolidation just since the beginning of this year, with large mergers and acquisitions coming fast and furious. Both the wheeling and dealing and the innovative solutions introduced by fintech companies such as Square have combined to drive the payments industry.

Over the trailing 1- and 3-year periods, the Pure Funds ISE Mobile Payments ETF (IPAY 3.28%), an ETF designed to follow the payments industry, has more than doubled the S&P 500 index's return. Two of this ETF's top holdings are PayPal Holdings Inc (PYPL 2.70%) and Discover Financial Services (DFS 4.81%). Let's take a closer look at both to see which might be the better investment today. 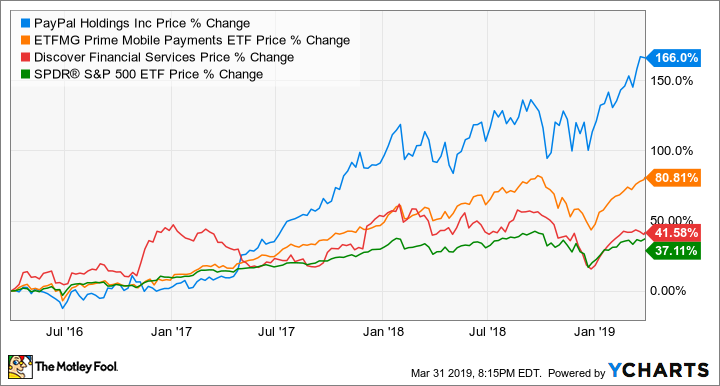 One of the largest advantages PayPal's digital wallet strategy holds over most of its competitors is that its platform holds universal appeal because it can be used with any device, operating system, bank, or merchant. In other words, it is completely agnostic. For other, would-be competitors, customers need to own the right smartphone or hold the right credit card to use similar services.

Because it is an agnostic platform, it can enter into partnerships with virtually every bank, financial institution, and merchant, further driving account-holder growth. In the company's fourth-quarter conference call, management stated it had secured partnerships with 20 "top-tier global financial institutions," including eight of the 10 largest banks in the U.S. Banks seem to love the partnership as much as PayPal, as it gives them another large digital channel they can offer their account holders. In 2018, more than 40 different banks produced marketing campaigns calling attention to their partnerships with PayPal.

Based on the midpoint of its 2019 full-year adjusted EPS guidance, shares are currently trading at a forward P/E multiple of about 36. In 2018, PayPal spent about $3.5 billion on share repurchases and $2.7 billion on acquisitions. 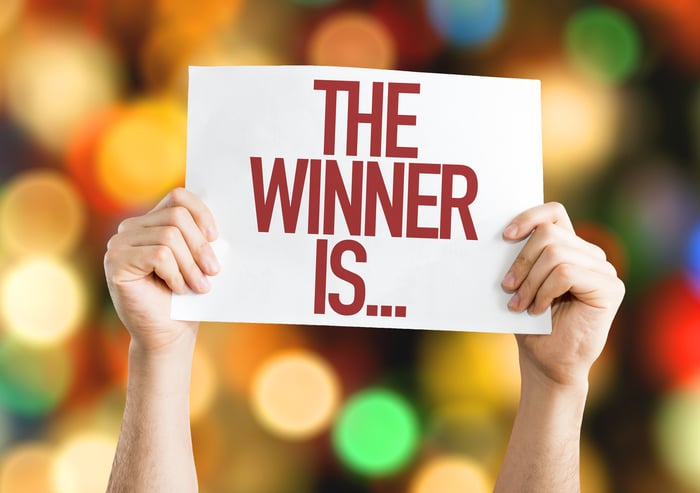 PayPal is growing at a faster rate, bu Discover trades at a more attractive valuation. Which makes for a better investment? Image source: Getty Images.

The case for Discover

Discover Financial, the smallest of the four major domestic credit-card companies, is most similar to American Express in that it lends directly to the consumer and is not just a payments network such as Mastercard and Visa. This exposes Discover to credit risk, but it also allows it to collect interest payments on the money it lends through its credit cards.

In Discover's fourth quarter, revenue rose 7% over last year's fourth-quarter total to $2.8 billion, while adjusted EPS grew to $2.03, a 31% increase year over year. The top- and bottom-line growth were driven by its total loan growth, which grew 7% to $90.5 billion. Its credit-card portfolio, by far its largest loan segment, rose 8% to $72.9 billion.

Because Discover directly lends to consumers, one of the most important things for investors is to see if it is growing its loan portfolio responsibly or chasing growth through risky lending practices. This can be determined by watching its net principal charge-off rate, a measure that shows the percentage of defaulted loans compared to total loans. In Q4, the company's total charge-off rate rose to 3.08%, 0.23 percentage points higher than 2017's fourth quarter, well within the boundaries of acceptable rates.

Based on the company's full-year EPS of $7.79, its shares currently trade at a P/E ratio of only 9.1, firmly placing Discover in the market's clearance bin. Since the company is projecting to continue growing its loan portfolio in the mid- to upper-single-digits in 2019, this bargain-basement valuation makes little sense. Discover management consistently returns capital to shareholders through share buybacks and dividends, with a current dividend yield of about 2.25%.

I would certainly not fault anyone for buying Discover's shares at this valuation. The credit-card company is well-run, consistently places high on customer satisfaction surveys, and practices responsible lending. It's hard to ask for much more than that from management. That being said, I would prefer to invest in shares of PayPal over Discover at this time. PayPal's competitive positioning as one of the only agnostic digital payment platforms should continue to drive outsized growth. Furthermore, unlike Discover, PayPal is not exposed to any credit risks that could lead to large losses in an economic downturn.

Though investments in both companies could beat the S&P 500 index in the years ahead, I believe PayPal makes for the better investment today.