Cord-cutting has been a massive thorn in the side of pay-TV distributors and television media companies for nearly a decade. After U.S. pay-TV subscribers peaked in 2010 at 105 million households, about 14 million homes have cut the cord, according to a report from Digital TV Research. The trend has only accelerated in recent years. 2018 saw nearly double the amount of cord-cutting over 2017, according to Leichtman Research.

But 2018 might've been the pay-TV industry's worst year for cord-cutting. The U.S. will lose fewer pay-TV subscribers this year than last, according to Digital TV Research. And the research firm suggests annual losses will continue to decline next decade.

But there are some key underlying trends investors should consider as overall cord-cutting declines. 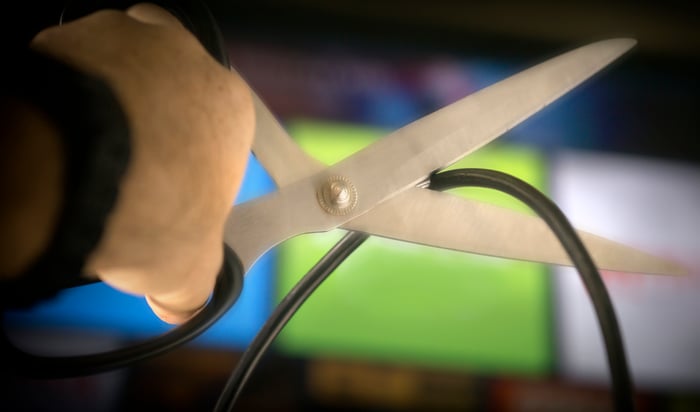 AT&T's (NYSE:T) DIRECTV and DISH Network (NASDAQ:DISH) led the way in customer losses in 2018, and that trend is likely only going to get worse even as overall cord-cutting improves.

The two satellite companies lost a combined 2.4 million subscribers last year, compared with 1.7 million in 2017. Telecom and cable providers have managed to hold up much better than satellite providers.

Both DISH and AT&T are using streaming services -- Sling TV and DIRECTV Now, respectively -- to help offset subscriber losses for their more expensive satellite service. But the subscriber additions for the streaming services aren't able to entirely offset their losses. That proved especially true when AT&T removed promotional pricing for DIRECTV Now. What's more, AT&T just raised prices for the service yet again, which ought to further hamper subscriber growth.

Satellite will face more challenges starting this year. The product is best used in rural areas, where building cable TV infrastructure is more costly. But wireless companies are starting to develop 5G networks, which will enable rural households access to high-speed internet fast enough to stream video content. That could enable more satellite customers to cut the cord or switch to an alternative live TV streaming service.

The number of households is still growing

While the number of pay-TV households fell from 105 million to 91 million between 2010 and 2018, the number of total households in the U.S. climbed from 117.5 million to 127.6 million. So the overall number of households without a pay-TV subscribers has basically tripled since the start of the decade. It might reach nearly 50 million homes by 2024, according to Digital TV Research.

That is to say there's still a rapidly growing market for direct-to-consumer video entertainment despite the potential that we've reached peak cord-cutting.

Disney (NYSE:DIS) is investing heavily in streaming video, acquiring a majority of BAMTech for its streaming technology and Fox for its studio output and its stake in Hulu. The company will have three direct-to-consumer streaming products by the end of the year, and it seems poised to make the most of the growing market opportunity among companies not named Netflix (NASDAQ: NFLX). That said, beyond the cost of its acquisitions, Disney is also burning cash to scale its streaming services.

There are a number of other high-profile streaming services launching this year or early next year looking to capitalize on the opportunity. A slowdown in cord-cutting shouldn't be a concern for those competitors, but the increasingly crowded market might be.

Investors should consider both of these major trends when looking at the home video entertainment business and its continued evolution.