International Business Machines (NYSE:IBM) sees potential in blockchain, the distributed ledger technology that underlies cryptocurrencies like bitcoin. The century-old tech giant is a leader in the blockchain market, with over 500 client engagements so far. Notable projects include IBM Blockchain World Wire, a platform for cross-border payments, and TradeLens, a blockchain system for the global shipping industry.

Another notable IBM blockchain project is Food Trust, a platform that enables quick tracking of food from farm to store. Tracking the source of a contamination, like recent E. coli outbreaks associated with romaine lettuce, can often take days or even weeks. IBM Food Trust can bring that time down to seconds, reducing costs for the industry while potentially saving lives. 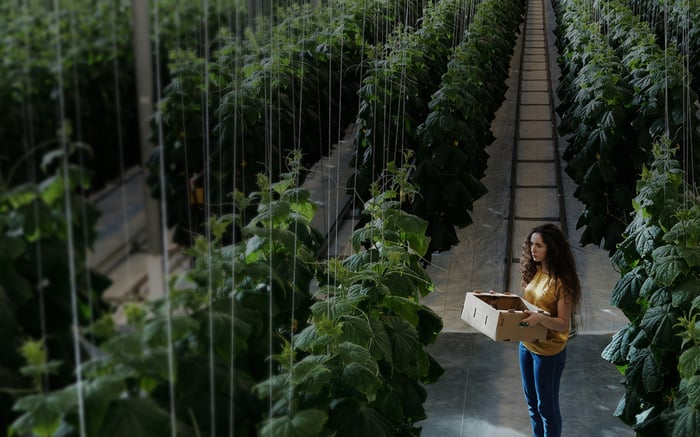 IBM Food Trust began as a pilot project with multiple food companies in 2017. In September of 2018, megaretailer Walmart fully embraced the platform, setting a timeline for its leafy-greens suppliers to join IBM Food Trust and enable end-to-end traceability. IBM Food Trust was made generally available in October, and a few more big companies joined the network. Most notably, French retailer Carrefour uses IBM Food Trust for some of its private-label products.

With Walmart jumping on board, it was only a matter of time before other supermarket chains followed suit. This morning, IBM announced that Albertsons Companies, a privately owned chain of roughly 2,300 stores, would begin piloting Food Trust for tracing bulk romaine lettuce from one of its distribution centers. If all goes well, Albertsons will explore expanding to other food categories.

Food Trust creates digital records of transactions and interactions. These records may include packaging dates, temperature readings, and dates of arrival at a grocery store. The goal is to turn the inefficient process of tracking down where a foodborne illness originated into an efficient, digitized process that can take contaminated products out of circulation quickly. The system can also help reduce food waste and food fraud (the deliberate tampering with or misrepresentation of food).

Albertsons sees Food Trust as a way to build trust in its own brands while providing greater transparency for its customers. "Blockchain technology has the potential to be transformational for us as we further build differentiation on our fresh brand. ... In addition, the provenance of the products enabled by blockchain -- the ability to track every move from the farm to the customer's basket -- can be very empowering for our customers," said Albertsons chief information officer Anuj Dhanda in IBM's press release.

The opportunity for IBM

The network effect, whereby the more people use a product or service, the more valuable that product or service becomes, is a powerful competitive advantage. Food Trust becomes more compelling for grocery chains and other food supply chain participants as more companies join the network. In fact, it begins to become necessary as large chains like Walmart mandate its use for suppliers.

If Food Trust ever reaches critical mass, becoming the de facto standard in the food industry, IBM will have a platform that generates fees and will be very difficult to disrupt. That's just about the best kind of business there is.

It remains to be seen whether IBM can continue to grow Food Trust into an industry standard. But with Albertsons joining the network, the odds just got a little bit better.