These stocks look like good values on a risk/reward basis.

"Growth at reasonable price" stocks are not going to shoot the lights out for you, but if you are interested in a potential double-digit return in a year or so then Emerson Electric, Ingersoll-Rand, and Dover Corporation might fit the bill. All three look like good values on a risk/reward basis, so let's take a closer look at them and why investors might consider buying them.

All well positioned for 2019

The three companies differ significantly in their end markets and recent history, but each of them is set to generate significant free cash flow (FCF) in the coming year. Indeed, for completely disparate reasons, they are likely to even increase FCF in 2019 -- and based on a cash flow valuation method, they are good values. 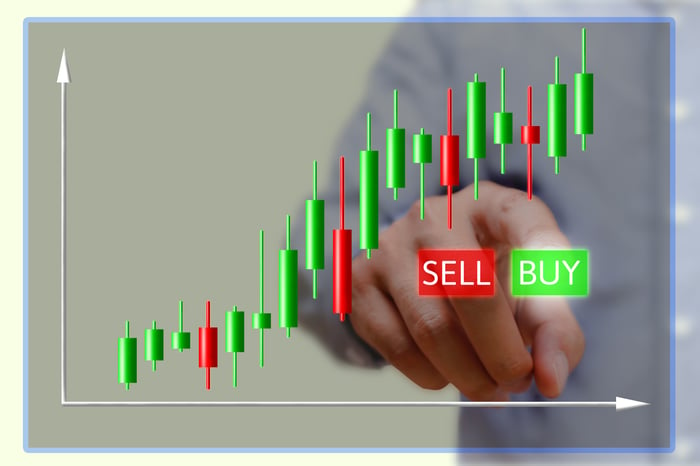 To put the forward FCF figures into context, Emerson's 17.1 ratio of price to FCF implies the company will generate 5.8% of its market cap in FCF. That's a good valuation compared to, say, the current 10-year treasury yield of just 2.5%

That's fine, but do they have growth prospects beyond 2019? Why is FCF set to improve? And how can Dover Corporation be considered a good value with a much higher price to FCF?

Emerson Electric's management believes that a combination of underlying sales growth of 4%-7% and contributions from acquisitions -- such as the purchase of General Electric's Intelligent Platforms  -- coupled with margin expansion will drive annual EPS growth of 10%-12% a year until 2021. By then sales are expected to be around $22 billion or above. And with FCF equivalent to around 13%-15% of sales, that implies FCF of around $2.9 billion to $3.3 billion by 2021.

Based on management's targets the stock is a good value, but Emerson's process automation sales will need energy prices to be stable, and spending in heavy industries like chemicals and mining, mineral, and metals will need to continue to grow. Meanwhile, its commercial and residential solutions will also need global gross fixed investment to stay in growth mode.

As you can see below, Emerson has tended to be a play on spending in heavy industries. U.S. industrial production fell into a recession in 2016, but if you feel confident in the outlook for Emerson's end markets then the stock is very attractive. 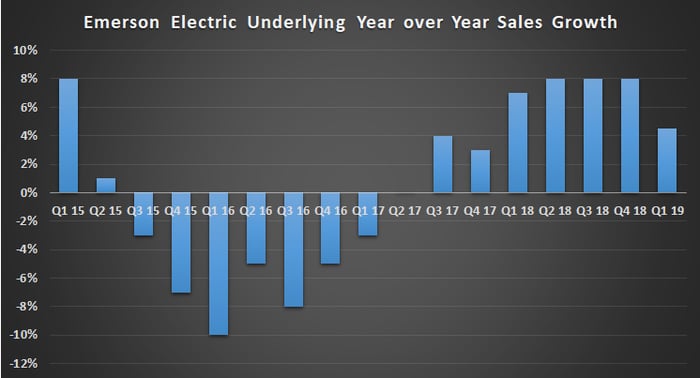 The heating, ventilation, and air conditioning (HVAC) specialist has strong long-term growth drivers behind it, and management continues to generate impressive expansion in margin and earnings.

Ingersoll-Rand's Trane is a high-quality player in the commercial and residential HVAC space, and its long-term growth is driven by a combination of greater awareness of "greater energy productivity, resource conservation, and environmental sustainability," in the words of CEO Mike Lamach.

In the long-term, developed economies are likely to continue to impose environmental regulations. A similar argument applies to emerging economies, but they are also likely to increase demand for HVAC as populations urbanize and get wealthier.

In the near-term, the company's excellent bookings and revenue trends suggest the company can hit its 2019 target of 5%-6% organic revenue growth. Throw in the potential for industry consolidation now that Carrier is being separated from United Technologies and prospects look bright for Ingersoll-Rand. 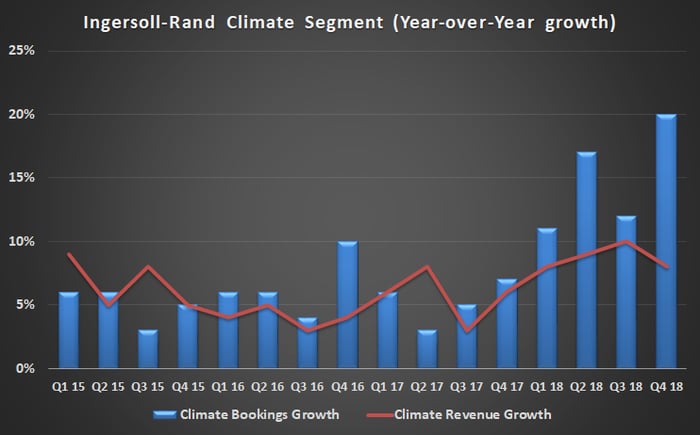 Dover Corporation is a turnaround prospect

While Ingersoll-Rand and Emerson Electric have both performed well in recent years from an operational perspective, Dover Corporation is very much a company in turnaround mode. In truth, it's more of a value play for investors.

Following the spin-off of its upstream oil and gas equipment businesses, listed as Apergy Corporation, Dover is now an industrially focused company. The problem is that two of its business -- retail fueling and retail refrigeration -- have underperformed, and management is taking action to improve matters.

It's largely a self-help story, although management is expecting/hoping for some improvement in retail refrigeration end markets. Dover's CEO Rich Tobin aims to right-size the company and cut costs by a net $100 million in 2019 -- a significant figure when you consider that operating earnings were $843 million in 2018.

As such, analysts have earnings growing at a double-digit rate over the next couple of years, and management expects to generate around $1.9 billion to $2.9 billion in FCF over the next three years. If the rightsizing plan works, Dover will exit the period with a business generating materially higher earnings and FCF.

Of the three, Ingersoll-Rand is probably the highest-quality company with the least downside risk. Emerson Electric's current 2.8% dividend yield will attract income seekers, but keep an eye out for spending in oil and gas and heavy industries in general. Meanwhile, Dover probably has the most upside potential -- just keep an eye on management's commentary regarding progress on the cost-cutting initiatives.