United Technologies needs to continue the good momentum generated in its last set of results.

The investment case for buying United Technologies (RTX 2.08%) stock has long been that the sum of the parts of its businesses was at a significant discount to what they traded at under the umbrella of the parent company. Moreover, the idea of giving investors differentiated investments (in terms of end markets and investment profile) is seen as beneficial to investors and management alike -- it's a key reason so many industrial conglomerates are breaking up. That said, United Technologies' different businesses still need to perform in order to release value, so let's take a look at what to expect in the upcoming results.

It's long been known that the aerospace businesses -- to be combined in the event of the separation -- are the strength of the company, and investors will be expecting another solid performance in the first quarter. The International Air Transport Association expects worldwide airline profit to improve by nearly 10% to $35.5 billion in 2019 with passenger departures expected to increase by 6.1%.

Investors will get a sneak preview of what to expect from the aerospace aftermarket when Honeywell International gives earnings in the week preceding United Technologies results. OE sales can be lumpy, but the key thing to follow here will be management's commentary on GTF production and unit cost of production cuts on the GTF -- something that could help the company overcome the negative engine margin implied in a ramp in production.

Putting aerospace to one side, the key swing factors in the company's performance in 2019 are likely to be its commercial businesses Otis (elevators) and Carrier (heating, ventilation and air conditioning, or HVAC, fire & security products and refrigeration). There are two things to look out for.

First, as you can see below, Carrier's margin performance has been disappointing for some time. Management puts it down to product mix, geographic mix, new product sales margin, and, of course, the rising input costs that hurt many industrial companies in 2018.

However, CFO Akhil Johri argued that "volume-related drop-through, pricing and productivity should more than offset input cost headwinds in 2019," so investors will be hoping for some margin improvement from Carrier in 2019. 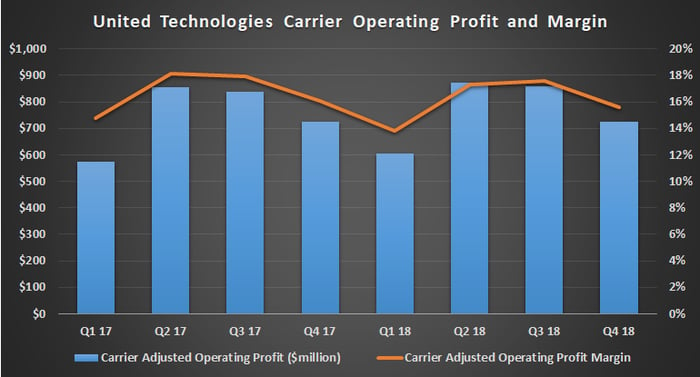 Second, there's plenty of market speculation around the idea that the HVAC industry is set for significant consolidation, and, as a leading player set to be spun off, Carrier is obviously part of that discussion.

While antitrust issues probably make a deal with Ingersoll-Rand's Trane a nonstarter, a deal with Johnson Controls is not out of the question, and the elevated valuation's of Lennox International -- one of the best-performing industrial stocks in the last year -- and commercial HVAC company AAON suggest that someone else thinks they are in play too. 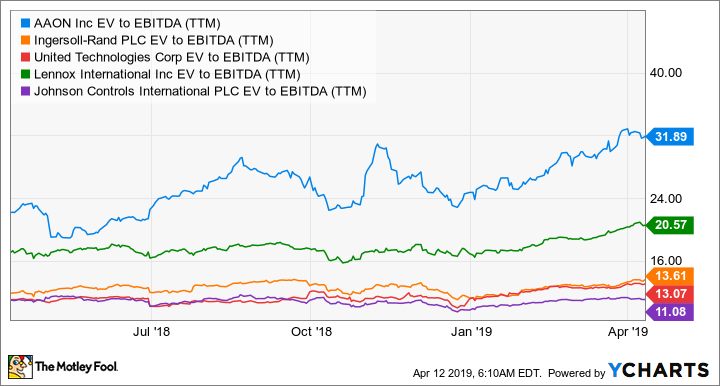 Look out for any management commentary with regard to Carrier's future, because investors might find the value released from United Technologies portfolio sooner than they think.

In common with Carrier, Otis felt the pinch from rising input costs last year. In addition, the company's exposure to China -- the largest market for new elevator equipment in the world -- is front and center of investors' concerns. In recent years, management has been willing to forego pricing in favor of winning back market share it lost due to previous rigidity on pricing. 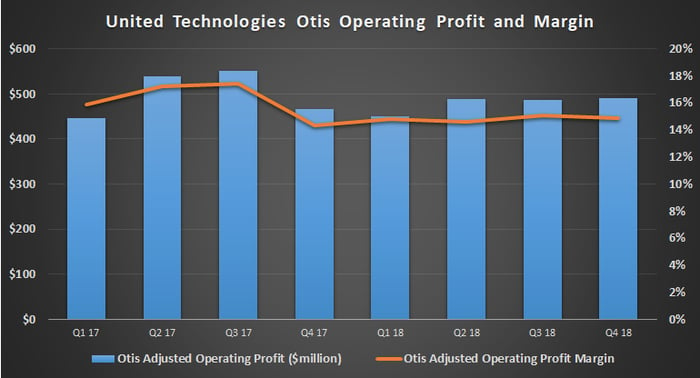 However, as Johri pointed out on the last earnings call, "China new equipment is projected to be up high single digit as the higher 2018 year-end backlog converts to sales. We also expect a stable new equipment market in China in 2019 and a faster conversion of new orders into sales." VP of Investor Relations Carroll Lane said, "Operating profit at Otis was up 7% at constant currency, marking the first quarter of earnings growth since Q3 2015."

Overall, Johri expects "flattish" margin performance for Otis in 2019 and before currency effects adjusted operating profit at Otis is expected to increase by $25 million to $75 million.

Given the deterioration in the growth outlook in the China economy in 2019, it will be interesting to see if all these expectations are maintained.

All told, it's reasonable to expect ongoing strength from the aerospace businesses, and Carrier could see some relative margin improvement. Otis's prospects look less certain, even though the last quarter saw tangible improvement.

If the company really is going to release value in its overall portfolio, it will need to demonstrate that all three business areas are making progress in 2019.