Here's why we think you should take a look at ExxonMobil, Royal Dutch Shell, and SolarEdge Technologies.

It has been an incredibly volatile few years for the energy industry. While you could argue that is par for the course in this industry, it certainly doesn't make it any easier when trying to make investment decisions. With demand for energy in all its forms still growing, there are plenty of lucrative investments across the entire spectrum of energy stocks.

So we asked three of our Motley Fool contributors to each discuss a stock in the energy sector that they think is a great buy this month. Here's why they picked ExxonMobil (XOM 0.69%), Royal Dutch Shell (RDS.A) (RDS.B), and SolarEdge Technologies (SEDG -3.54%). 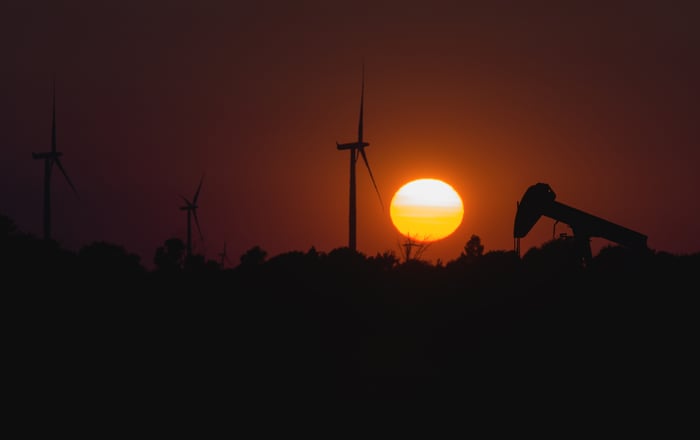 Oil is outperforming expectations -- so might this oil producer

Rich Smith (ExxonMobil): Oil prices are on a tear. A barrel of WTI crude oil now costs nearly $65 -- up 52% from its Christmas Day low point of $42.53 and up 14% over the past month. This is a whole lot more than the $60-per-barrel price that Citigroup told investors to expect back in December.

That has to be good news for ExxonMobil stock, right?

In fact, it already has been good news, with Exxon stock up 20% since I recommended buying it in December. But 20% is a whole lot less than 52%, and I think Exxon has more room to run if oil prices stay this strong.

Valued at $345.4 billion in market cap, Exxon shares cost only 16.6 times their trailing earnings. Analysts who follow the stock think Exxon is good for nearly 20% annualized earnings growth over the next five years -- and it pays a 4% dividend yield to boot.

That's a 24% annualized total return, which compares favorably to the stock's 16.6 P/E ratio. So, while December 2018 was undeniably a good time to buy ExxonMobil stock, I think it still looks almost as attractive in April as it did four months ago.

John Bromels (Royal Dutch Shell): As Rich points out, strengthening oil prices are good for big oil companies like ExxonMobil. Exxon's fellow oil major, Royal Dutch Shell, is poised to benefit for the same reasons. But unlike ExxonMobil, Shell also made big investments in natural gas during the oil price slump of 2014-2017, buying up British gas giant BG Group. Those investments helped Shell thrive when oil prices were falling in the fourth quarter of 2018.

In that quarter, it was an increase in the price of natural gas that powered Shell's massive year-over-year increases in revenue, net income, and earnings per share. Gas prices had eased back down by the start of Q1 2019, but that's right about when oil prices began to increase. This diversification -- not to mention the diversification between production and refining/marketing assets -- helps to protect Shell shareholders' investments.

Another way Shell rewards its shareholders is through its best-in-class dividend, currently yielding 5.9%. Shell is also trading at an attractive (and also best-in-class) valuation of just 11.5 times earnings. Now is an excellent time to consider an investment in Royal Dutch Shell. 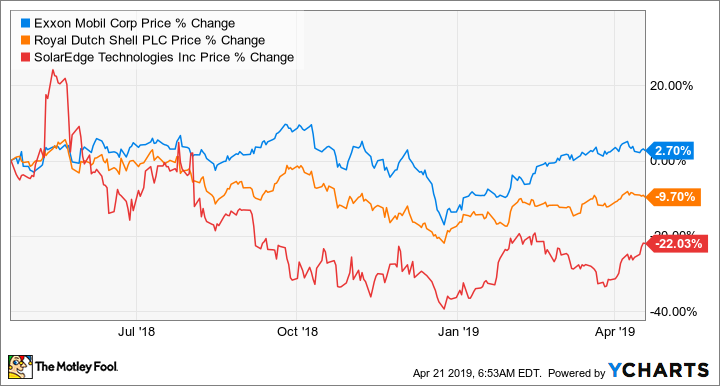 Tyler Crowe (SolarEdge Technologies): One of the biggest knocks on investments in the solar industry is that it has historically been an incredibly low-margin, low-return business. The rapid advancement in technology and manufacturing processes has made solar panels more affordable and allowed installations to flourish, but those advancements in technology also mean solar panels are frequently in a race to the bottom of the price curve. That's not always great for a company's bottom line.

One that has been able to buck this trend thus far has been solar power component manufacturer SolarEdge Technologies. In 2018, the company reported a 41% increase in earnings growth and has maintained a gross margin north of 30% since going public in 2015. While gross margin slipped slightly in the most recent fiscal year to around 32%, it is still solidly profitable and has several growth irons in the fire, including power optimization and energy storage packages.

Even though the company has proven itself by capturing a dominant market share in residential solar power component installations, Wall Street hasn't been too keen on the stock over the past several months, and its shares now trade for a more than reasonable price-to-earnings ratio of 16 times. It's hard to find companies in the energy space with as much room to grow and solid financial performance while trading for such a modest valuation.