Chipotle Mexican Grill (NYSE:CMG) reported first-quarter results on April 24, and there's no denying that it was a blowout quarter. Sales were up a relatively modest 13.9%, but the vast majority of that growth -- it only opened 13 net new restaurants in Q1 -- came from growth at locations open at least one year. So-called comp sales surged a massive 9.9% in the quarter, with a 5.8% increase in transactions.

This huge boost in traffic was largely driven by digital orders, a combination of sales for deliver and pickup via the Chipotle app, which doubled year over year. The result was a big jump in operating leverage, allowing Chipotle to squeeze a lot of incremental profits from each new sale and pushing earnings per share up an impressive 47% on a GAAP basis and 59.6% when excluding some nonrecurring items. 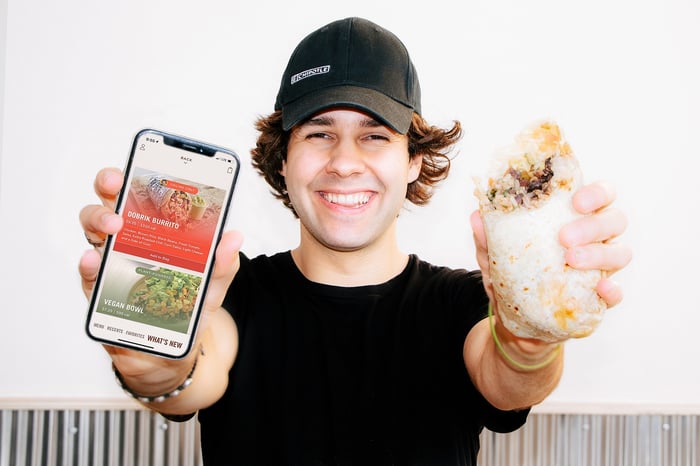 Let's take a closer look at Chipotle's quarter, what's working, and what management has to say about its outlook.

Let's get right to the heart of the matter: Chipotle's earnings growth was primarily a product of operating leverage. As the table above shows, labor, food/packaging, and occupancy/other all fell as a percentage of sales. The biggest reason why this occurred was the company sold more food from existing restaurants, and there remains significant untapped potential volume from its store base to grow sales, without having to increase store-level expenses at the same rate as sales growth.

Labor was a key demonstrator of this. Yes, there's only so much productivity that can be generated from an employee, but CFO Jack Hartung said on the earnings call that it was primarily sales leverage behind the improvement and that the company expected second-quarter labor costs to improve further, into the "low 26% range" mainly from further sales leverage improvement.

The biggest driver of sales and traffic growth for Chipotle, as mentioned above, were digital orders, which include sales for pickup and delivery (in markets where available) via the Chipotle app, as well as delivery orders placed with partners such as DoorDash. Hartung did point out that, the "other operating costs" line, which includes delivery expenses, did increase year over year, but the sales leverage generated by those additional sales more than offsets that expense in the form of incremental margin.

While management spent all of its energy focusing on the things it's getting right -- and rightfully so, considering the blowout results this quarter -- there was the reemergence of the company's albatross in recent years.

In the company's 10-Q earnings filing, which wasn't filed until the day following the earnings call and press release, Chipotle disclosed that it received a subpoena in mid-April requesting information related to foodborne illness incidents in several of its restaurants in recent years.

When word of this disclosure got out before trading on April 25, Chipotle shares plummeted at the open, and finished the day down 5%.

A few takeaways here. First, it makes sense that management didn't talk about this or bring it up on the earnings call. The company had just finished one of its best quarters in years, and instead of losing control of the message, management was able to emphasize that customers are indeed coming back.

Moreover, the new subpoena probably shouldn't be viewed as dire news. There has been an ongoing investigation into the foodborne illness events going back several years, and this latest subpoena consolidated several information requests, while adding a request for information related to a 2018 incident at an Ohio Chipotle restaurant.

The big takeaway is that this latest piece of information doesn't really change the story or the thesis; there is -- and remains -- some financial risk of penalties that could come from the investigations, but the bigger picture story remains unchanged. Put it all together, and with shares up more than double over the past year, there was probably a lot of profit-taking in the selling on April 25.

Looking ahead: Boosted comps expectations, accelerating new openings in the second half

Management doesn't give quarterly guidance, but does offer some color on its full expectations in a few categories. After the strong results in the first quarter, those expectations were raised. In its full-year 2018 earnings, the company set expectations for "mid-single-digit" comps growth, and raised that to mid-to-high single-digit comps growth for the full year.

Yet even with that expectation coming out of a superb quarter, Hartung pointed out that, as the year progresses, the company would face potentially tougher comps each quarter, though seasonally higher sales in the spring and summer could offset that to some extent. In other words, management wants to temper Mr. Market's expectations somewhat. But he then went on to offer more color on sales leverage, setting the expectation that investors should expect sales expense to keep falling as a percent of sales and for continued growth in digital orders to drive incremental margin improvement.

Lastly, Chipotle plans to open 140 to 155 new restaurants this year, nearly double the 83 net new locations last year. But with only 15 new restaurants opened in the first quarter (and two more closed) the company has a long way to goal to reach that number. On the earnings call, management said that most of those would be opened in the second half of the year, and they still see the potential for as many as 5,000 total restaurants.

Put it all together, and Chipotle management seems to expect more of the same kind of strong operating and financial result we just saw in Q1 to continue as the year goes forward. Considering that the average Chipotle restaurant still generates about 18% fewer sales than at the peak in 2015, there's very good reason for management to be optimistic about the chain's ability to grow sales -- and profits -- even more from here.