The pending merger between these two is up in the air. If you look at both companies' financial situations, however, the choice is clear.

Both Sprint (S) and T-Mobile (TMUS 0.23%) trail their two larger peers, but that's the only thing they have in common. Sprint is struggling to add customers, and that means trouble for its finances given the weight of its massive debt burden.

While T-Mobile is gaining ground on Verizon Communications (VZ -1.67%) and AT&T (T -0.47%), it's still way behind, which is why it wants to merge with Sprint. T-Mobile generates less than half the revenue of Verizon, so adding Sprint would allow the company to quickly catch up and generate better margins by spreading operating costs over a much larger customer base.

However, antitrust concerns stand in the way of a deal. Some analysts have put the odds of the deal getting approved by the government at 50-50. If the merger fails, that will leave Sprint scrambling to survive, while T-Mobile would still be in a decent competitive position.

You don't want to buy Sprint assuming the deal will succeed, especially after news broke last month that the attorneys general in several states may file lawsuits to block the deal. But deal or no deal, there are four reasons why T-Mobile is the better buy. 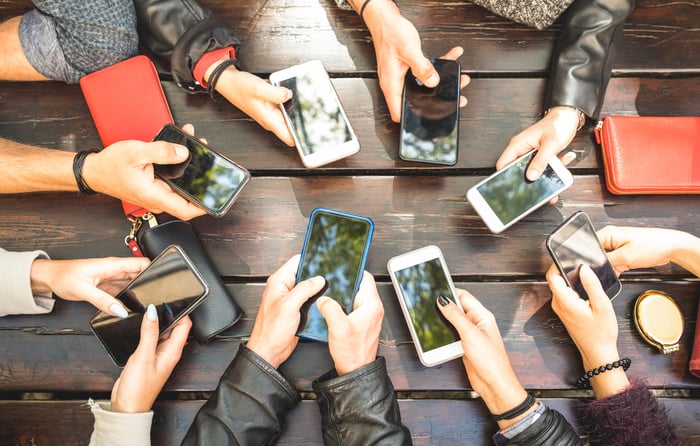 If you're a wireless carrier and you're not growing revenue but your competitors are growing, that's a big problem. Over the last five years, Sprint's revenue has declined by about 4% while T-Mobile's revenue has climbed 42%. A combination of smart marketing and a competitive service-coverage area has allowed T-Mobile to become the default alternative for millions of customers who are not satisfied with their service from the two leaders, AT&T and Verizon.

The telecommunications industry is a race to win customers and build scale. A larger customer base drives down the cost per customer, making it less expensive for the company to attract new customers and grow the top line. In other words, a large customer base can lead to better profitability.

Here's a comparison of the four main carriers' operating margins:

The relative operating margin of the big four carriers tells investors a lot as to which company is the strongest and leading the race.

T-Mobile boasts a customer base of 79.7 million and growing. Meanwhile, Sprint is struggling to hold on to its 54.5 million customers by continuing its unsustainable practice of using aggressive promotional pricing to attract customers. That's pretty much the only card Sprint can play at this point since it's way behind the other three in service coverage.

Here's a comparison between Sprint's and T-Mobile's financial situations:

Five years ago, Sprint generated more revenue than T-Mobile, but that's no longer the case. With more customers, more scale, and better profitability, T-Mobile can cover the interest expense on its debt nearly four times over with its annual operating income. Sprint is currently not generating enough profit to pay the interest expense on its debt, which means if the deal fails with T-Mobile, Sprint may not be around much longer.

Wireless carriers offer a commodity service with not much to differentiate themselves, other than geographic coverage. Sprint wins on pricing, but it's slowly pricing itself out of business given its relatively low profit margin. Just about every survey shows Verizon on top in terms of best overall service measured across a range of essentials, including coverage, pricing, range of plans, and fastest network.

However, T-Mobile continues to score high up on various "top phone service" lists. Three top phone service lists I looked at had T-Mobile second behind Verizon. Sprint, not surprisingly, trailed the pack.

Specifically, on customer satisfaction, T-Mobile separates itself from the competition. According to the annual American Customer Satisfaction Index, T-Mobile was No. 1 among the big four carriers. T-Mobile also saw the most significant year-over-year percentage increase in its score, while Sprint was the only carrier that experienced a decline in its customer-satisfaction score.

Sprint isn't worth the risk

At this point, the only path forward for Sprint is merging with T-Mobile. If the deal doesn't go through, Sprint shares will likely tank, and that could very well prove to be the death knell for the No. 4 carrier. In March, Sprint stock fell 11% after news broke that the attorneys general in several states may file lawsuits to block the pending merger.

With T-Mobile, investors get a win-win: If the deal fails, investors will own shares in one of the hottest carriers out there that's growing its customer base and delivering growth on both the top and bottom line. If the deal succeeds, Sprint's spectrum coverage will complement T-Mobile's wider coverage area, allowing T-Mobile to continue making inroads on the two leaders.

The downside is likely greater than the upside for Sprint. Therefore, T-Mobile is the better choice for investors.