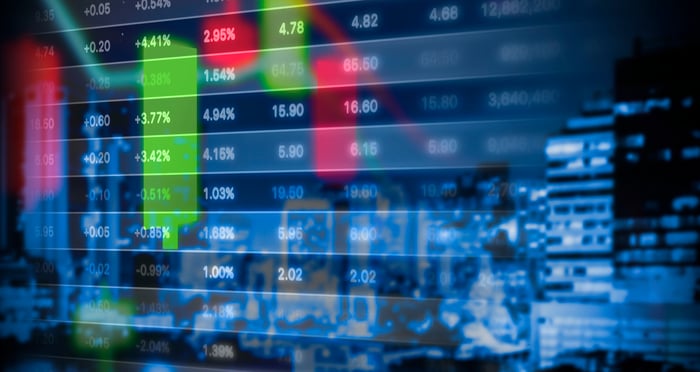 Class C shares of Google parent Alphabet tumbled 7.7% after the company missed revenue expectations for the first quarter and investors worried about decelerating top-line growth. Revenue increased 17% to $36.3 billion, about a billion dollars less than Wall Street was expecting, and a slowdown from 22% growth last quarter. Excluding a provision for a $1.7-billion-dollar fine from the European Union, earnings per share fell 11% to $11.90, better than the $10.56 analyst consensus.

Advertising revenue accounts for 85% of Alphabet's revenue, but grew only 15% year over year, compared with 20% growth last quarter. The revenue Google brought in with each ad click fell 19%, but that decline was consistent with recent history as advertisers shift to YouTube. More concerning to analysts on the conference call was deceleration in the growth of the number of paid clicks, which slowed to 39%, compared with growth rates in the 50s and 60s in recent quarters.

Alphabet officials on the call were unconcerned with the slowdown, saying that changes made to advertising software for long-term benefits will cause variations from quarter to quarter. Indeed, Wall Street's take only three months ago was exactly the opposite, with investors cheering accelerating growth.

A nice first step in a long journey for General Electric

General Electric swung to profit and reduced its cash burn rate in the first quarter, and investors celebrated the progress in its turnaround effort by bidding up the shares 4.5%. Revenue fell 1.8% to $27.3 billion, and continuing earnings per share came in at $0.11, or $0.14 on an adjusted basis. Analysts were expecting adjusted EPS of $0.09 on revenue of $27.05 billion.

Orders were up 1%, with 9% order growth in oil and gas and a 7% gain in aviation helping to offset a 14% order decline in the struggling power unit. On an organic basis, orders rose 9%. Adjusted industrial free cash flow was negative $1.2 billion, an improvement from last quarter's outflow of $1.8 billion.

GE maintained its outlook for the year, saying its outperformance in Q1 was mainly due to timing issues that won't repeat. But one quarter into a multiyear transformation, investors seem to be believing the turnaround story, and have bid the stock up 59% from its December low.

What Happened in the Stock Market Today
405%