Please ensure Javascript is enabled for purposes of website accessibility
Log In Help Join The Motley Fool
Free Article Join Over 1 Million Premium Members And Get More In-Depth Stock Guidance and Research
By Travis Hoium, Leo Sun, and Todd Campbell – May 2, 2019 at 5:11PM

Here are three stock picks with a lot of growth ahead.

Investors have a lot of choices when it comes to company size on the market. Large companies often provide stability but grow more slowly than smaller options. Small companies have upside but are often riskier than more capitalized companies. In the middle are mid-cap stocks, which can provide some stability with the potential for growth. 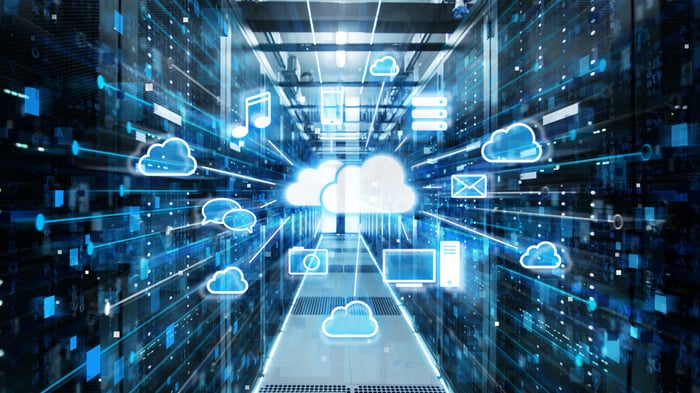 This fast-growing cybersecurity stock could get much bigger

Todd Campbell (Zscaler): Corporations are shifting their data to the cloud, and workers are increasingly accessing data from many different devices and locations. Altogether, that's made protecting company data a problem.

Zscaler's solution allows employees to access information directly from anywhere and any device. Rather than routing their requests through legacy architecture that creates gaps in security or latency concerns, Zscaler is purpose-built to eliminate redundancy, allowing direct access to applications hosted in the cloud.

The company's already helping 2,800 customers, including GE, but there's still plenty of room for account growth, because it's only working with about 10% of Forbes Global 2000 companies. I suspect that a much bigger proportion of the world's largest companies will work with Zscaler in the future, because according to GE's chief technology officer, deploying Zscaler as part of eliminating its traditional network has helped it reduce latency by 80% while saving it millions per year.

Zscaler's sales have grown to $190 million in fiscal 2018 from $54 million in fiscal 2015. So far, the sales momentum has continued into 2019, with fiscal second-quarter revenue growing 65% to $74 million. In fiscal 2020, industry watchers think revenue could reach $380 million. With growth like that, Zscaler could make the leap to large-cap stock from mid-cap stock soon.

Leo Sun (Bilibili): Bilibili is a Chinese tech company that offers ACG (animation, comics, and gaming) content to the country's Gen Z internet users. The company generated 62% of its revenue from mobile games last quarter, but it's gradually reducing that percentage by expanding its ecosystem of live video broadcasts, online ads, and e-commerce services.

Bilibili's monthly active users (MAUs) rose 29% annually to 92.8 million last quarter. Within that total, its mobile MAUs rose 37% to 79.5 million. Its number of "official" members, who must pass a 100-question "geek culture" test to gain access to special videos and perks, surged 44% to 45 million. Those hardcore fans are more likely to buy value-added services like virtual gifts for live broadcasters.

Bilibili's total revenue rose 67% to 4.1 billion RMB ($600.5 million) in 2018, and analysts anticipate 56% growth this year. Those are robust growth rates for a stock that trades at less than six times this year's sales.

Bilibili isn't profitable yet, and its net loss widened last year as it expanded its video, advertising, and e-commerce services. However, its rapid growth in MAUs and revenue justifies those expenses, and it could evolve into a much larger company over the long term.

Changing the future of law enforcement

Travis Hoium (Axon Enterprise): Body cameras have become a hot topic in law enforcement, and the dominant player in the industry is Axon Enterprise. The company makes Tasers and body cameras, but its booming business is cloud services.

Axon Cloud is where videos are automatically stored from officers' body cameras. The company is also introducing a records management system that will create police reports with camera data, reducing paperwork for officers. The cloud segment generated $26 million of the company's $115 million in revenue last quarter, up 50% from a year ago, and consistently has gross margins over 70%.

What's great about this business model is that most cloud contracts are for multiple years. Axon even ties body camera and Taser upgrades into simple monthly payments for law enforcement agencies, reducing the up-front outlay for getting equipment. You can see in the chart below that the strategy has led to strong growth for Axon and big gains for investors. 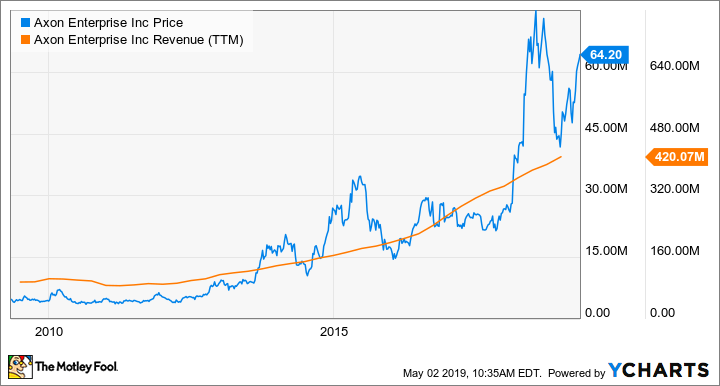 I think we're just getting started in improving the images and data law enforcement agencies are capturing, and Axon Enterprise will play a big role in the industry. And as the only major body camera company around, it's set to continue growing long term.

Notice that all of these companies are somehow involved with technology and the cloud, where a lot of growth is taking place today. The cloud gives them tremendous upside, and if their businesses grow as hoped, they could be huge winners for investors over the long run.