Please ensure Javascript is enabled for purposes of website accessibility
Log In Help Join The Motley Fool
Free Article Join Over 1 Million Premium Members And Get More In-Depth Stock Guidance and Research
By Lou Whiteman - Updated May 3, 2019 at 4:40PM

This latest move fortifies 3M's existing wound care business, but will it be enough to help the company heal?

After reporting quarterly earnings that resulted in the stock's biggest single-day loss since the 1987 market crash, 3M (MMM 0.01%) announced it would buy wound care specialist Acelity for $6.7 billion. 3M already has a major wound care presence, including a range of Cavion skin protection products, Tegaderm antimicrobial dressings, and Coban and Steri-Strip dressings and this deal should bolster that business.

It's going to take a lot longer to judge whether the purchase, the largest in 3M's storied 117-year history, is the beginning of the fresh start 3M so desperately needs, or a knee-jerk reaction from a company searching for ways to spark growth. The company has been mired in the consequences of its past pollution practices that resulted in dangerous chemicals in its Scotchgard product contaminating bodies of water and groundwater at several sites in the U.S. Will this latest deal help 3M start to heal? 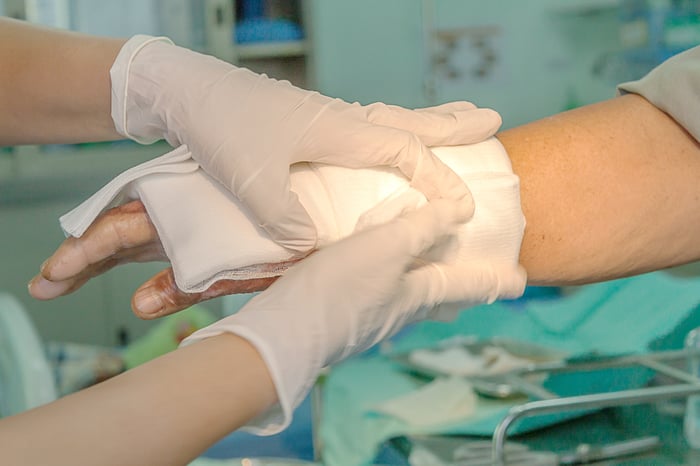 A push toward better health

3M, best known as a maker of Post-it notes and Scotch tape, said May 2 it would acquire Acelity from a consortium of private equity firms to broaden its exposure to the healthcare sector. Acelity is a $1.5 billion-sales maker of wound dressings marketed under the KCI brand and specialized systems that use a vacuum to seal off wounds, promoting faster healing.

The deal was not cheap, priced at 15 times Acelity's 2018 adjusted EBITDA, but 3M said the value is only 11 times annual adjusted EBITDA, assuming it can extract all the synergies it anticipates.

CEO Mike Roman on a call with investors following the announcement said that the purchase would broaden 3M's exposure to the $8 billion advanced wound care market, which he said is growing 4% to 6% annually.

"Acelity is an excellent complement to our healthcare portfolio, a leader in improving outcomes and lowering the cost of care," said Roman. "The acquisition will further strengthen our ability to offer even more comprehensive solutions to advance the healing process and improve patients' lives."

3M's first quarter was dragged down by weakness in its automotive and electronics segments and from a slowdown in Asia, but healthcare was a relative overachiever. It was the only one of 3M's five divisions to report sales growth, with food safety and oral care sales leading the way.

The company is financing the deal for Acelity via a combination of cash on hand and proceeds from the issuance of new debt. Because of the purchase, 3M now expects to repurchase between $1 billion to $1.5 billion of its shares in 2019, down from previous plans to buy back $2 billion to $4 billion in shares.

The timing of the deal is eye-catching for several different reasons. Not only did it come just days after 3M's earnings release, but it also follows Acelity's April filing for an initial public offering (IPO). Given the excitement for IPOs in the current market, 3M presumably had to offer an attractive premium to get the target's owners to forgo an offering.

Roman didn't delve into specifics about the timing, but said it "has been our top priority acquisition in this category to really build for the long-term." Given healthcare's relatively strong performance in the quarter and the sector's overall growth trends, it makes sense that is an area where 3M would look to expand.

As we've talked about in our portfolio strategy, acquisitions that complement the fundamental strengths of our portfolio, healthcare being a very attractive space that's been an important focus for us for some time and we've been engaged with Acelity for some time as well. And so this has been an ongoing discussion. We see this as an opportunity that now is a great time to be able to move forward with this. And that, like I said, is the number one priority for us in our acquisition strategy.

Perhaps so, but acquisitions can also be fraught with danger if the acquirer overpays or integration does not go to plan. That's particularly worrisome at a company like 3M that has very little experience in large-scale M&A and has undetermined environmental penalties hanging over its head.

An end of an era?

3M's calling card throughout its long history has been its focus on, and the effectiveness of, its research and development (R&D) operations. Post-it notes were developed by a 3M scientist in search of a better bookmark for his church hymnal who collaborated with a coworker who had a failed adhesive that stuck but didn't bond with surfaces. Scotch tape is said to be the invention of a 3M lab tech after hearing complaints from auto finishers.

The most alarming thing about 3M's Acelity deal is not the timing of it, so soon after the earnings disaster or the price, but rather that the company would feel the need to augment its internal R&D efforts with a large purchase.

3M historically has traded at a premium to other manufacturers in part on the confidence its track record inspires that the next big thing is percolating inside the halls of its research facilities. Acelity might end up being a great acquisition that complements 3M's growing healthcare division well. But if it is also a sign that 3M's innovation pipeline after all these years is finally regressing to the mean, investors need to be on guard.  Further, investors should be staying attuned to any further decisions on how much 3M will owe in cleanup costs as state governments start to put it on the hook for serious environmental remediation.