Please ensure Javascript is enabled for purposes of website accessibility
Log In Help Join The Motley Fool
Free Article Join Over 1 Million Premium Members And Get More In-Depth Stock Guidance and Research
By Chris Neiger - May 5, 2019 at 8:15AM

These chip companies are betting on big tech trends, but only one is diversifying its revenue to win over the long term.

NVIDIA (NVDA 5.29%) and Qualcomm (QCOM 4.32%) are two top-notch chip companies that have both led their respective markets in everything from cellular connectivity for mobile devices to graphics processors for gaming devices.

But just because both Qualcomm and NVIDIA are leaders in chip technology doesn't make them equally good investments. To find which of the two looks like the better long-term bet, let's take a closer look at the prospects for these two companies. 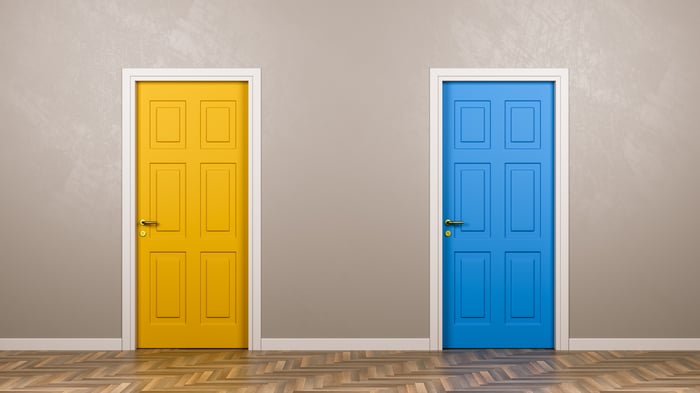 One of Qualcomm's most significant opportunities comes from the new cellular standard, 5G. While 5G may seem like a marketing gimmick, the new wireless technology will make internet speeds up to 20 times faster than 4G LTE and will allow devices to connect to cellular towers at fast rates.

Qualcomm has built its business largely on creating modem chips that allow devices to connect to 3G and 4G cellular networks, and the company is hoping that 5G will bring the next boost to its business. Qualcomm CEO Steve Mollenkopf said late last year that 5G is "a significant opportunity for Qualcomm to expand revenue and earnings as we exit fiscal 2019." That's because 5G will expand into a $619 billion market globally in the next few years.

If you've been following Qualcomm, then you may know that over the past few years, it has fought lawsuits by other companies claiming it charged too much for its patent licensing fees for cellular technology. The results of those lawsuits have hurt Qualcomm's business, but there could be good news going forward. Just last month, Apple and Qualcomm settled their differences with each other, which was one of Qualcomm's longest-running feuds.

What investors will need to see from Qualcomm is a clear indication of increased chip sales in the coming quarters as 5G networks begin to come online globally. There's no doubt that Qualcomm will play an important role in this new tech, but just how much it'll benefit the company's bottom line is still a big unknown.

NVIDIA isn't tapping into the growing 5G trend like Qualcomm is, but the chipmaker still has plenty of ways to grow from emerging technologies.

For one, NVIDIA's gaming graphics processing units (GPUs) account for more than half of its sales. And even though sales in the segment have slowed recently, the gaming market is poised for more growth. In 2018, gaming was worth about $138 billion. By 2021, it's expected to grow to $180 billion.

While NVIDIA is the undisputed leader in graphics cards for the gaming market, it is facing stiff competition. NVIDIA's latest mid-range graphics cards may be priced too high and could prove to be underpowered when its rival, Advanced Micro Devices, releases new cards later this year.

Beyond gaming, NVIDIA is using its GPUs in an array of other tech, including artificial intelligence and autonomous vehicles. The company's Drive PX Pegasus allows automakers and tech companies to bring driver assistance and self-driving technologies to vehicles. NVIDIA believes the autonomous vehicle market has a lot of potential for the company and estimates that it has a total addressable market for self-driving of $60 billion by 2035.

If all of that weren't enough, NVIDIA's chips are also being used by tech companies to boost their data processing capabilities and make their artificial intelligence services better. NVIDIA's GPUs help AI process image information and other data inputs, and the company believes its total addressable market for AI will reach $50 billion by 2023.

I think NVIDIA's ability to diversify its revenue across AI, gaming, autonomous vehicles, and other sectors makes this company a better buy.

Not only is NVIDIA pursuing rising tech trends, but it's also the leader in GPU technology and shows no signs of giving that title up any time soon. Qualcomm will benefit from 5G, but perhaps not as much as it did from 3G and 4G, when the company received massive licensing fees. So while Qualcomm has good potential from this new tech trend, NVIDIA has more opportunities across a wide range of technologies, which gives it the overall win in this matchup.