Please ensure Javascript is enabled for purposes of website accessibility
Log In Help Join The Motley Fool
Free Article Join Over 1 Million Premium Members And Get More In-Depth Stock Guidance and Research
By Chris Neiger – May 6, 2019 at 6:45AM

Both companies are betting on 5G, but that doesn't make them equally good investments right now.

Investors looking for a stock that will benefit from the expansion of the new 5G wireless standard have likely considered the two biggest wireless carriers in the U.S.: Verizon Communications (VZ 0.26%) and AT&T (T 0.16%).

But while both companies are helping to lead the 5G charge, it's worth taking a closer look at how each may benefit from it and what their current financial pictures look like. This will help determine which one looks like the better buy overall. 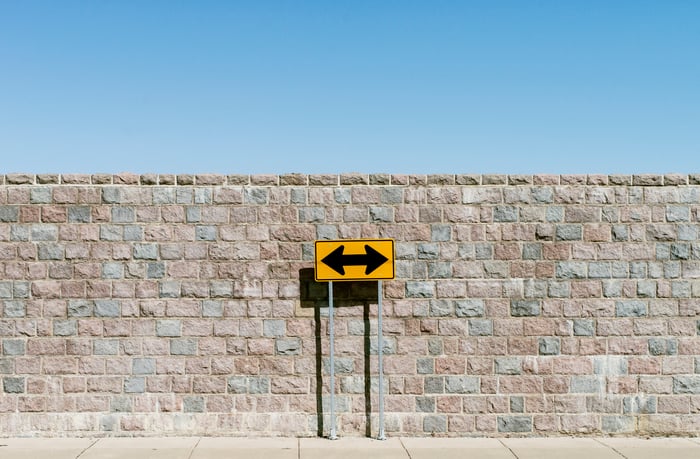 AT&T is making big bets on two key opportunities: a 5G rollout, and video content distribution through its recent purchase of Time Warner. The first will give AT&T access to a market estimated to grow to $619 billion by 2026. The latter provides the company with the ability to diversify away from wireless revenue.

AT&T has already begun to roll out its 5G network in about 20 cities in the U.S. and has plans to bring more online by the end of the year. 5G could be a key driver for wireless carriers in the coming years. The technology will give users access to speeds about 20 times faster than 4G LTE and lower latency rates (basically, devices will connect to cell towers much faster).

The shift toward 5G will take a few years to complete, but wireless carriers will likely be able to eventually extract more revenue per user account from 5G. AT&T may not charge more for 5G connections at first, but you can bet that the company isn't spending billions of dollars to get its new network online just for fun. At some point, more expensive 5G plans will be introduced or older, cheaper plans will be phased out.

While AT&T is looking to its Time Warner purchase to boost its sales, Verizon recently had a $4.9 billion writedown from its media company, previously called Oath and now named Verizon Media. Verizon still owns the content offerings that it acquired from AOL and Yahoo!, but the high cost of buying the media properties, and their lack of sales growth overall, resulted in the writedown. Verizon Media revenue fell 7% year over year in the first quarter of 2019.

While Verizon's media ambitions aren't panning out right now, the company still has a lot of potential for more growth from its wireless business. Verizon is spending between $17 billion to $18 billion this year, with most of that going to 5G expansion as it attempts to build the leading 5G wireless network in the U.S. The company says that it'll have 5G services in 30 cities by the end of the year.

While AT&T and Verizon are both aggressively pursuing 5G, Verizon may have the advantage because the company is building out the new network on top of its industry-leading network. Verizon consistently ranks as the top wireless carrier in the U.S. in third-party tests, which could help the company attract new customers (and keep existing ones) as it updates its network.

Additionally, 5G networks will bring more opportunities for the company to boost its Internet of Things (IoT) revenue. Verizon says that container ports, oil rigs, construction sites, and other industrial services are connecting to the internet, and 5G will make these connections more reliable. With Verizon already offering IoT services to its customers, 5G could be a natural way to expand this business.

To get an even better picture of how these companies are doing, it helps to look at their current financial picture. Here's how AT&T and Verizon stack up right now.

AT&T has substantially more debt right now because of its Time Warner acquisition. The company is taking significant steps to reduce its debt, but it's not out of the woods yet. All of this debt gives AT&T a net debt to EBITDA ratio is 2.98. Having a lower debt to EBITDA ratio is preferred and when comparing two companies in the same industry it can help paint a picture of of which company may be taking on too much debt. For comparison's sake, Verizon's net debt compared to its EBITDA is 2.32 right now.

AT&T aims to bring its debt total down to $150 billion by the end of this year. If the company's debt reduction plans get knocked off course or don't go as fast as planned, it could miss that goal. Because Verizon is holding substantially less debt than AT&T, and because it's still too early to tell how well AT&T's purchase of Time Warner will pan out, I'm giving Verizon the win for this one.

Both companies have a lot of opportunities to benefit from the growing 5G market. It will likely take a few years for their 5G services to help their bottom lines, but the early investments now should pay off later.

While AT&T is jumping headfirst into video content with Time Warner, Verizon appears to be backing off of some of its content push after the company's recent writedown. This gives AT&T an advantage over Verizon in the media space.

But overall, AT&T's current debt makes the company less attractive than Verizon. Investors may want to hold off on AT&T for now until it pays off some of its obligations. All of that gives Verizon's stock the slight advantage over AT&T right now.