Please ensure Javascript is enabled for purposes of website accessibility
Log In Help Join The Motley Fool
Free Article Join Over 1 Million Premium Members And Get More In-Depth Stock Guidance and Research
By Lou Whiteman - May 13, 2019 at 3:32PM

Tariff talk keeps sending this company off the road.

Harley-Davidson has long been at the center of President Donald Trump's trade battles, dating back to 2018 when the European Union responded to steel and aluminum tariffs by raising tariffs on Harley motorcycles and other U.S. goods. The company said at the time that it could lose upward of $100 million per year from the move and said it would shift production of some European-bound bikes overseas. 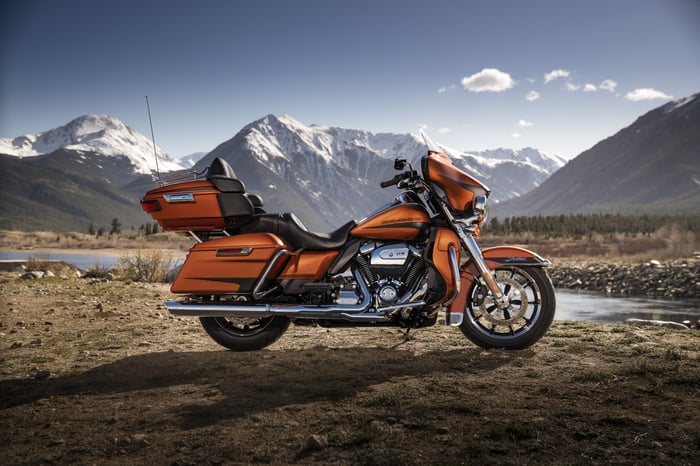 Last month the company reported earnings that were down year over year, citing tariff issues for part of the weakness. In a tweet, Trump pledged to reciprocate against European Union tariffs, threatening to deepen the company's exposure to trade battles.

"Harley Davidson has struggled with Tariffs with the EU, currently paying 31%. They've had to move production overseas to try and offset some of that Tariff that they've been hit with which will rise to 66% in June of 2021." @MariaBartiromo So unfair to U.S. We will Reciprocate!

While there appears to be no specific Harley connection to the threats by China on Monday that caused stocks to tumble, Harley shares tend to react to negative trade developments, given recent history.

Even without the tariff mess, Harley-Davidson has challenges on the road ahead. Motorcycle demand is on the decline in the U.S., and its hope of expanding in markets like India where demand remains strong have hit a speed bump.

Shares are down more than 50% over the past five years. Until the company can demonstrate it has a winning plan to generate growth, these headline-related drops are no reason to go bargain hunting.