Please ensure Javascript is enabled for purposes of website accessibility
Log In Help Join The Motley Fool
Free Article Join Over 1 Million Premium Members And Get More In-Depth Stock Guidance and Research
By Chris Neiger, Anders Bylund, and Steve Symington - May 15, 2019 at 10:27AM

Investors need to take a closer look at these compelling tech plays.

Investors may be concerned about rising tensions in the trade war between the U.S. and China that's caused some recent volatility in the stock market, but that doesn't mean that there still aren't great companies out there that are worth snatching up right now. The technology sector, in particular, has plenty of fantastic companies that investors can buy now and hold onto for the long haul.

We reached out to three Motley Fool contributors for their thoughts on three of the best tech stocks to buy this month. They mentioned Universal Display (OLED 4.11%), Skyworks Solutions (SWKS 3.99%), and Microsoft (MSFT 2.76%). Here's why. 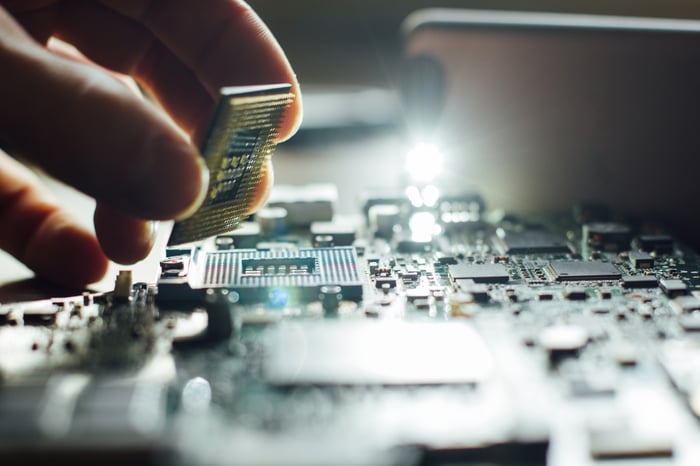 The future is bright for Universal Display

Steve Symington (Universal Display): I know Universal Display stock only just popped 12% after the organic light-emitting diode (OLED) technologist crushed expectations and raised its full-year guidance with its first-quarter report earlier this month. But the stock has also given back some of those gains in the days since, and I think there's reason to believe it has much, much higher to go from here.

One reason is that management cited "strong momentum in the [OLED] industry" for the company's relative outperformance. Original equipment manufacturers (OEMs) continue to spend tens of billions of dollars not only to create novel, innovative new display form factors centering around OLED -- most recently including devices with foldable displays as seen in Samsung's Galaxy Fold -- but also to build out their respective OLED manufacturing capabilities. And that's not to mention the fact that the potentially massive OLED lighting industry is still in its infancy. What we're seeing right now reflected in Universal Display's boosted 2019 outlook are only the first fruits of a much longer-term trend supporting the company's growth.

What's more, last week, Universal Display set the groundwork to expand its reach even further with the launch of UDCVentures, a new corporate venture arm with a stated goal to "invest in and partner with entrepreneurs, disruptive start-ups and innovative, emerging companies with an emphasis on technology platforms that have a strong proprietary position and significant growth potential." And of course, UDCVentures will leverage Universal Display's strengths, focusing on sectors ranging from OLED to lighting, displays, materials sciences, and other organic electronics.

Universal Display has cash, cash equivalents, and short-term investments of more than $525 million on its balance sheet and nominal debt. I think this a fantastic way for the company to explore putting its excess resources to work.

Buy Skyworks when smartphones are suffering

Sounds like bad news, but the company has a few tricks up its sleeve. For one, Skyworks has started to boost the amount of business it gets from other end markets, such as next-generation WiFi routers and military-grade radio systems. Looking ahead, Skyworks is winning large supplier contracts as the market for 5G wireless infrastructure equipment takes shape.

"Skyworks' unique systems expertise, strategic partnerships and global scale are critical to the success of 5G deployments," Griffin said. "It's still early innings but that infrastructure is rapidly being deployed, and we think there's a very long tail of opportunity here with 5G just starting to roll."

Mr. Market has been paying a lot of attention to Skyworks' smartphone struggles, while largely forgetting about the company's existing and upcoming growth alternatives. So share prices have fallen 21% over the last year, including a 13% slide in the last month alone, and you can pick up Skyworks shares today for the low, low price of 13 times trailing earnings, or 10.3 times forward estimates. That's a fantastic deal considering Skyworks' industry-leading chip portfolio and the generous profit margins it supports.

Bet on the cloud

Chris Neiger (Microsoft): It can be tempting to think that only the youngest and flashiest tech companies are the ones worth investing in. After all, they'll be the ones that will grow fast and generate huge returns, right? Maybe, but so can tech stalwarts that have established themselves in their respective markets and have the foresight to see new trends and jump on them.

That's precisely what Microsoft has done as the company has successfully pivoted its software and services to the cloud. In the company's fiscal third quarter (which it reported on April 24), Microsoft's commercial-cloud sales jumped 41% year over year, to $9.6 billion, its intelligent cloud segment (which includes server solutions) was up 22%, and its Azure cloud-computing service grew by 73%. Sales from the company's cloud products boosted Microsoft's sales 14% year over year and earnings by 19%, surpassing analysts' consensus estimates for both.