Please ensure Javascript is enabled for purposes of website accessibility
Log In Help Join The Motley Fool
Free Article Join Over 1 Million Premium Members And Get More In-Depth Stock Guidance and Research
By Chris Neiger – May 17, 2019 at 5:08PM

Pinterest (PINS 2.35%) reported its first-quarter 2019 results Thursday, the company's first earnings report since it went public in April. The social media company said sales improved 54% year over year, to $201.9 million, and an earnings net loss of $40 million was an improvement from its loss of $47 million in the year-ago quarter.

However, investors weren't impressed with the company's Q1 results, especially Pinterest's loss per share of $0.32, which was greater than analysts' consensus estimate of a loss of $0.11 per share. As a result, Pinterest's share price has been falling in Friday trading.

To better understand what happened with Pinterest in the first quarter, it might help to take a look at what management had to say on the company's earnings call about user engagement, improving the company's advertising, and international opportunities. 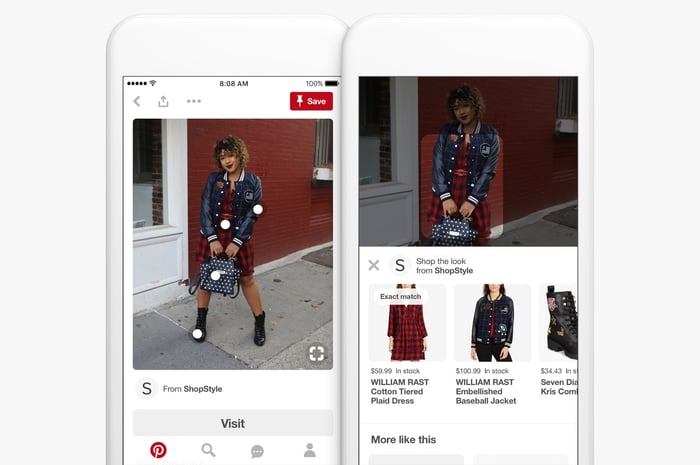 Pinterest grew its monthly active users from 239 million to 291 million in the first quarter, representing a 22% increase year over year. The company doesn't give specific user engagement figures, but Pinterest's management said that sometimes users leave the platform after they've found the visual inspiration they were looking for on their project.

"A lot of what we're starting to turn our attention to is how to help people understand that Pinterest can be used not just for the thing they happened to be using it for today, but for multiple things," Pinterest co-founder and CEO Ben Silbermann said on the call.

The company is working on ways to invite users back to Pinterest for new use cases and has launched new tools to make its platform more inclusive, management said. One way Pinterest's leadership said it's trying to boost user engagement is through new platform tools that allow users to search for their skin tone when looking through images. Pinterest CFO Todd Morgenfeld explained:

[W]e want to make the experience more inclusive to bring people who haven't traditionally been on the platform [so they] find it more useful and bring utility into their lives. One example of how we're doing that is the skin tone filter initiative that we launched in Q1 which opens up new demographics to the value of being on Pinterest to find inspiration and bring new ideas into their life.

Pinterest makes money by selling ads on its website, and the company has said in the past that ads are "native content" on the site because many users are going to Pinterest specifically to look for things they can buy.

To help bring more ad revenue in, the company created a new self-service ad tool in the first quarter that allows advertisers to upload their entire retail catalog to Pinterest. Silbermann said they created the new feature to "make it easier to go from inspiration all the way to a purchasing event" for users.

He also noted that this new feature is just the first step toward helping businesses make more sales through Pinterest. He says it will be a "multi-year investment" that will start to be a meaningful revenue driver in 2020 and beyond.

Silbermann said, "In the long term, we eventually want to make it so everything that you see that's inspirational can eventually be purchased with as little friction as possible."

3. International growth is an area to watch

Morgenfeld said that most of the international sales come from English-speaking countries, but that the company is working to boost sales in Western Europe, as well. He admitted that monetization efforts in Western Europe are "still very nascent."

To help continue improving its international sales, the company works with existing advertisers and runs ad campaigns for them in a new market to show them the potential of expanding their ad reach on the platform.

"They are people that are familiar with the story. And then what we'll often do is we'll help them find success in those markets, we'll document that in the form of the case study," Silbermann said.

About 71% of the company's monthly active users are outside of the U.S., so improving international sales is a big part of Pinterest's growth plan.

Pinterest's quarterly results may not have been everything that investors had hoped for, but the company is making solid progress in its sales growth and is working on getting its users more engaged in the platform. Additionally, investors should keep a close eye on how well Pinterest grows its international sales.

Pinterest still needs to prove that its growth is sustainable, but investors shouldn't let one quarter of results be the deciding factor as to whether or not to invest in the company.