It's been a long time since it was actually "fun" to own General Dynamics (NYSE:GD) stock.

After nearly doubling in value off its January 2016 lows to tip the scales at almost $230 in March of last year, General Dynamics has embarked upon a steep slide in share price, and is down nearly 20% over the past year -- against a 5% rise in the S&P 500.

Much of this pain can be attributed to falling profit margins, which are no longer tipping the scales at multiyear highs. Much more is due to struggles at GD's real profit driver: its Gulfstream business jets division. And yet, knowing that Gulfstream has been General Dynamics' Achilles' heel in recent months may also reveal the key to what will get its stock moving again.

It's also the reason why General Dynamics won its second upgrade in less than a month this morning. 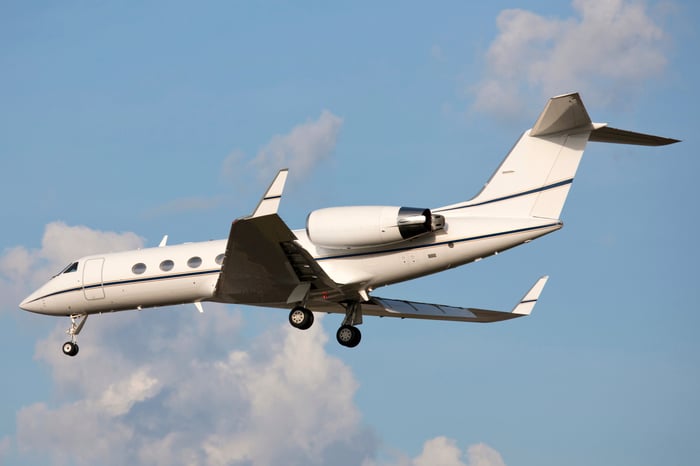 The trouble with Gulfstream

My Fool.com colleague Lou Whiteman did yeoman's work describing the situation with Gulfstream in his earnings report rundown last month. "Aerospace has been an albatross weighing on General Dynamics' results for the better part of a decade," wrote Whiteman, with development costs for the company's new G500- and G600-series jets weighing on results, and troubles with the supply chain complicating matters even further.

And yet, the G500 has now launched, and business jet deliveries were up 42% year over year last quarter. The G600 is expected to be certified by the end of this quarter and to begin deliveries before the end of the year. Management says demand is "solid," leading Whiteman to postulate that "investors should expect Gulfstream margins to increase significantly in 2020, and again in 2021" -- and with sales growing in tandem with profit margins, this should lead to strong profits at General Dynamics' most important division.

Taking a cue from management, last month investment bank JPMorgan reversed its long-standing underweight rating on General Dynamics stock -- a rating motivated largely by concerns over the health of Gulfstream -- and upgraded the shares to neutral. Today, analysts at Goldman Sachs are going a step further and upgrading General Dynamics to buy.

With General Dynamics down 19% in 52 weeks, Goldman argues that any headwinds still opposing the stock are now priced into the shares, which currently trade at "the low-end of historical ranges," as noted in a TheFly.com write-up of Goldman's upgrade. Currently, GD shares sell for 1.3 times sales, versus 1.7 times sales at defense rivals Lockheed Martin and Northrop Grumman, and 1.8 times sales at Raytheon. Whiteman notes that if you survey the rest of the defense sector, General Dynamics stock now "trades at a price-to-sales multiple 10% lower than its closest defense rival."

And yet, Goldman Sachs doesn't believe that such a discount is warranted. Agreeing with Whiteman's position, the analyst predicts we will see higher Gulfstream margins going forward as G500 and G600 production ramp. Free cash flow can also be expected to improve "materially," says StreetInsider.com (subscription required). (General Dynamics generated only $2.4 billion in positive cash profits last year -- $1 billion less than the company churned out in 2017, and 27% below reported net income of $3.3 billion.)

As a result, Goldman Sachs believes the time has come to buy General Dynamics -- and keeps its price target at $204 a share.

Goldman Sachs predicts that improvements in General Dynamics' fortunes at Gulfstream are likely to result in improving investor sentiment toward General Dynamics stock -- and its own upgrade of the shares confirms that at least one analyst is convinced. And yet, investors need to be aware that as of today, free cash flow is still falling, not growing (trailing-12-month results show FCF down to $2.1 billion as of Q1 2019). And while most analysts surveyed by S&P Global Market Intelligence agree that free cash flow will improve this year (to $3.6 billion), most analysts also believe FCF will remain stuck at that level through 2020 (also $3.6 billion).

And of course, GD management itself did warn last quarter that its earnings in Q2 2019, at least, will be "very similar" to what it earned in Q1, which suggests a return to growth won't be soon in coming.

With General Dynamics shares still trading for a pricey 23 times trailing free cash flow, and a still historically high price-to-sales ratio of 1.3 -- even if that ratio is 10% cheaper than other defense stocks -- I still don't think that makes General Dynamics cheap enough to buy.