Amazon.com (NASDAQ:AMZN) has yet to officially enter the wearables market, which is expected to see global unit volumes approach 200 million this year across all product categories, according to recent estimates from IDC. Wrist-worn wearables, including smartwatches and other types of wristbands, are expected to account for 70% of those volumes. Those categories are currently dominated by Apple and Fitbit, but Amazon is reportedly looking to jump in.

The e-commerce giant's history with consumer hardware is littered with both abject failures and blowout successes. Which will Amazon's forthcoming wearable device be? 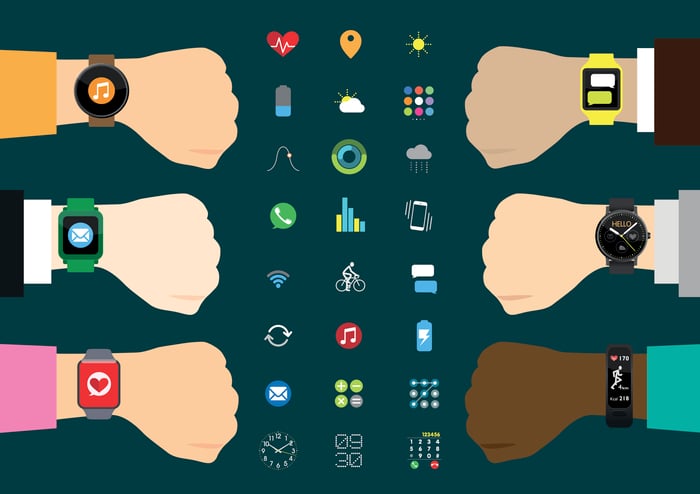 Bloomberg reports that Amazon's secretive Lab126 hardware division is developing a new wrist-worn wearable device that would naturally be powered by Alexa, Amazon's wildly popular virtual assistant that now supports roughly 90,000 third-party Skills. The device would focus on health and fitness, which has emerged as one of the most important use cases for wrist-worn wearables.

Perhaps most intriguing is that Amazon wants the device to be able to "recognize human emotions," according to the report. No, we're not talking about somethnig like novelty mood rings, which merely detect the wearer's skin temperature. Amazon is reportedly hoping to read emotions strictly using voice recognition, leveraging just microphones instead of some array of biometric sensors. The wearable would work in tandem with a smartphone app that would process the voice data in order to assess the user's emotional state.

It's unclear what price point Amazon might target for the wearable, or whether the company would position it as a single-purpose basic wearable or a full-featured smartwatch. The company would need an app ecosystem if it's hoping for the latter. Amazon has long leveraged Android for its platforms; Fire OS, which powers Fire TV and Fire tablets, is based on Android, and Echo devices use a modified version of Android. That could potentially represent a shortcut to wearable apps, even if the Wear OS app ecosystem is somewhat lacking.

Of course, Amazon could decide to shutter the project, as it is still early in development.

What is Amazon really after?

While Apple and Fitbit are betting that creating digital health platforms will be the key to unlocking wearables demand, helping users collect and manage health data in order to make better health decisions, Amazon appears to have a different but unsurprising goal: to sell you more stuff. Amazon is expected to use the information that it gathers to improve ad targeting and make product recommendations.

That might not sound particularly altruistic, but it's worth noting that the company has been pushing deeper into healthcare, including its joint venture with Berkshire Hathaway and JPMorgan Chase that hopes to rein in employee healthcare costs, as well as its roughly $750 million acquisition of online pharmacy PillPack last year.

People need healthcare products, and if Amazon can more proactively, efficiently, and affordably get those products to patients that need them, that's a good thing.