Please ensure Javascript is enabled for purposes of website accessibility
Log In Help Join The Motley Fool
Free Article Join Over 1 Million Premium Members And Get More In-Depth Stock Guidance and Research
By Rich Duprey - May 25, 2019 at 7:31AM

The sporting goods retailer has warned it's going to be a while yet before growth returns.

Dick's Sporting Goods (DKS 1.01%) managed to beat analyst expectations last quarter despite shooting itself in the foot by banning the sale of certain guns and eliminating the hunting department altogether at more than 100 stores. Gun owners and enthusiasts also bought a lot of other gear at the retailer, and so angering a large swath of its customer base caused a backlash that affected other departments.

Yet the sporting goods outlet is starting to lap those decisions, and the merchandise that's replacing hunting gear and accessories carries higher margins. With Dick's scheduled to report first-quarter earnings on May 29, let's take a look at what investors might have in store for them. 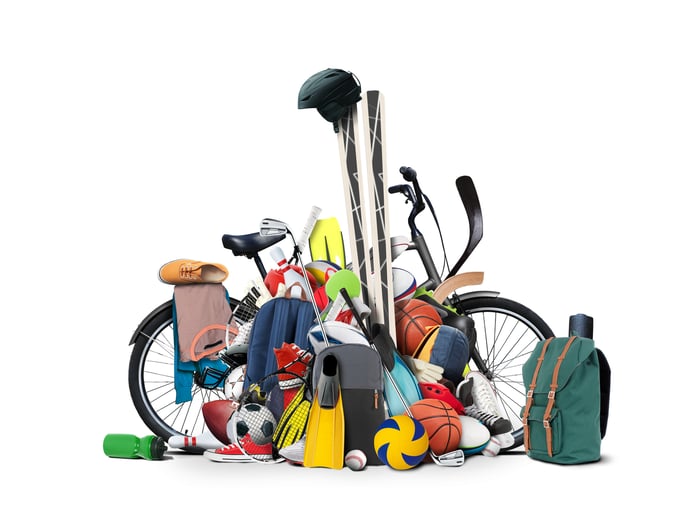 The gun industry has been in an extended slump. In that light, Dick's wanting to bringing in products that can sell year-round and that also carry better profit margins makes sense from a business standpoint.

Dick's is adding new baseball equipment, licensed products, and outerwear, including store-label brands, like Calia and the recently introduced Alpine Design, to boost sales and profits. It noted last quarter that those products gained some traction with customers, as comps in those areas were up by low single-digit rates. The goal is to have private-label items account for $2 billion in annual sales, though there's no timetable for achieving this.

Dick's will still have national brands in its stores, and despite the troubles Under Armour (UAA 3.76%) (UA 4.64%) continues to experience, Dick's CEO Ed Stack remains confident the brand will eventually turn itself around.

He's apparently betting big on that rebound happening, because when Under Armour reported its own first-quarter earnings earlier this month, it said that its wholesale business, which comprises sales to retailers like Dick's, jumped 5% to $818 million. That stands in stark contrast to Under Armour's North American sales decline of 3% from last year. Under Armour's direct-to-consumer business was a shambles, with revenue down 6% year over year.

Did Dick's back the wrong horse? While sticking by Under Armour, Dick's told Adidas (ADDYY 4.12%) it was kicking Reebok to the curb. The brand had represented 90% of the apparel merchandise in Dick's stores, but it wasn't selling.

And that still seems to largely be the case: Adidas reported Reebok sales were down 6% in the first quarter, but they were gaining traction again in a number of overseas markets, including China. Adidas has a plan to get the brand back to growth by next year and says it is confident it is on track to do so. Margins for the brand were up almost three percentage points to 44.7%, well below their historical levels but heading in the right direction for a business Adidas is working to improve.

That could be worrisome for Dick's, since it's betting on Under Armour, which still isn't showing any improvement in its business. It may do better with its private-label brands, but that doesn't say much for an apparel line that takes up a lot of shelf and rack space in Dick's stores.

One brand that has been paying off for Dick's is Yeti (YETI 5.78%), which the sporting goods retailer crowed about last quarter. Yeti saw its own wholesale sales jump 8% in the period as retailers like Dick's and Bass Pro Shops took a lot of shipments earlier than Yeti had been anticipating, which suggests the retailers are planning for the gear to sell well.

Still, Dick's has warned it won't see any meaningful growth companywide until the second quarter. Even then, its full-year guidance is fairly lackluster, indicating that despite the low bar it set for itself last year, the sporting goods outfit is going to have a difficult time clearing the hurdle.