The defense contractor's billing headache is likely to continue well into 2020.

Congress is doubling down on its investigation of TransDigm Group (TDG 2.31%), requesting the Pentagon's inspector general (IG) launch a new, more detailed probe into the component supplier's pricing strategies.

Further scrutiny seemed likely after a bruising Capitol Hill hearing last month, but the new request sends a clear signal to investors that TransDigm's Washington headache is far from over. An initial IG probe found that TransDigm made "excess profit" on 46 of 47 spare-part purchases examined. Congress would now like the inspector general to conduct a more complete review of the company's government billings.

"Because you identified so many overcharges in just the small sample of contracts you examined, we believe it is highly likely that TransDigm is receiving additional excess profits that have not yet been identified," the committee wrote in a letter to the inspector general. "For these reasons, the Committee requests that your office conduct a comprehensive review of TransDigm's contracts with DOD to identify whether TransDigm earned excess profits on contracts outside of your original sample."

TransDigm's May 15 appearance before the committee was an ugly affair for the company, with U.S. Rep. Ro Khanna (D-Calif.), in an opening statement, giving examples of company pricing including a cost breakdown for a part called a quick disconnect coupling half that is used on the F-5 Freedom Fighter and the T-38 Talon jet trainer.

The coupling costs TransDigm $173 to manufacture, according to a Pentagon inspector general's report on TransDigm released earlier in the year, but the company charges the Pentagon $6,986 apiece for the part.

That initial report, which was the basis for the May hearing, concluded, according to TransDigm, with "no assertions of any wrongdoing" and a request for a $16 million "voluntary refund." But it also made for terrible headlines and unwelcome publicity. In TransDigm's defense, many of the parts it sells to military and commercial customers are for equipment that has long been out of production, meaning there are no steady production lines or caches of spare parts. The price per unit, therefore, often covers not just raw materials and direct manufacturing costs but also the cost of setting up a production line.

In the case of the coupling, for example, the T-38 has been out of production since the 1970s and the F-5 since the 1980s, although the planes are still in use today as trainer aircraft.

It's also far from certain the committee's assumption that a wider probe is "highly likely" to show additional examples is correct, as the IG could have explored parts for older programs and other areas more likely to show markups in its initial review.

Run out the clock?

You could argue that a new inquiry benefits TransDigm, because it makes it more likely that there will be no immediate ramifications. The fear coming out of the May hearing was that Congress would add language addressing either TransDigm specifically or parts sourcing more generally in the fiscal 2020 budget bill. So far that risk has not materialized.

The House Armed Services Committee did not include any specific language in its draft National Defense Authorization Act. That's a positive for TransDigm, although language could be added via amendments leading up to the eventual authorization in the fall. There is also a chance that the Senate could add language, with Iowa Republican Sen. Chuck Grassley leading the charge against TransDigm in that chamber.

A new inspector general investigation will take time and seems likely to drain momentum from the crowd that would like to see immediate action. The probe does add new risks, as investors can't be certain the IG will not uncover new issues that will add to TransDigm's woes, but assuming there are no smoking guns hidden in the billing records, a long, drawn-out process works to the company's advantage in the face of enraged lawmakers looking to score immediate political points.

TransDigm is an investor favorite, and a government target, because of the company's ability over time to generate margins approaching 50% of sales. No matter what happens in Congress, TransDigm's tech-like margins are unlikely to evaporate overnight.

The inspector general estimates defense accounts for about one-third of TransDigm's total sales, but that number likely includes supplies to foreign entities and other non-Pentagon channels. TransDigm as of 2016 was not one of the top 30 defense contractors. The company has said that sales to the U.S. government account for between 6% and 8% of total revenue, and military sales tend to be among the company's least profitable channels.

While it is possible commercial customers could push back on pricing as well, TransDigm's emphasis on the aftermarket and its ability to get rare, hard-to-source parts to customers quickly tend to be worth a premium in the marketplace.

While TransDigm investors need to watch what happens on Capitol Hill, the company's ability to successfully integrate Esterline Technologies, its recent $4 billion acquisition, is likely more important to TransDigm's ability to remain an outperformer. The company throughout its history has had success bringing acquisitions into the fold and streamlining operations, but Esterline is a large morsel to swallow and had a history of underperformance. 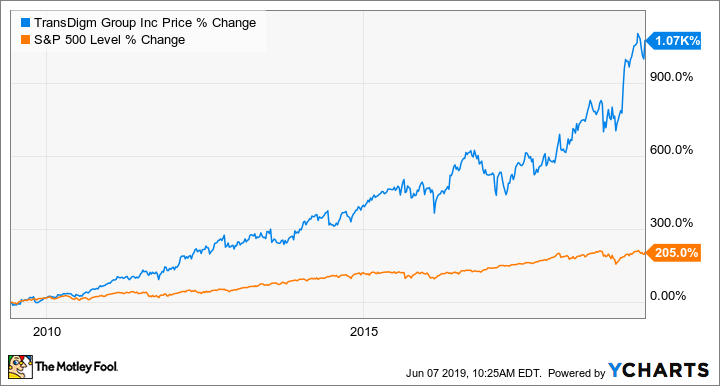 The TransDigm model, which has generated outsize returns for more than a decade, can withstand congressional scrutiny and short-term turbulence while the drama plays out. Assuming the company can apply that model to Esterline, TransDigm should continue to be an outperformer long after the congressional spotlight fades.