Please ensure Javascript is enabled for purposes of website accessibility
Log In Help Join The Motley Fool
Free Article Join Over 1 Million Premium Members And Get More In-Depth Stock Guidance and Research
By Chuck Saletta, Rich Smith, and Keith Noonan – Jun 14, 2019 at 6:00AM

If you're interested in making money in the market, you could do far worse than to seek out the types of companies that the world's greatest living investor likes to buy.

Warren Buffett has earned a well-deserved reputation as the world's greatest living investor. He parlayed a stake in Berkshire Hathaway (BRK.A 0.59%) (BRK.B 0.43%), at the time a struggling textile manufacturer, into a multibillion dollar insurance and investing powerhouse through his shrewd financial acumen. Buffett's primary strategy is straightforward: Look for strong businesses with long-term focuses that reward their owners well and then buy them at reasonable prices.

We asked three of our contributors to put themselves in his shoes and pick a business that Buffett would love. They picked Amazon.com (AMZN -0.64%), Waste Management (WM -1.21%), and McDonald's (MCD -2.90%). Read on to find out why they think these stocks just might belong in Buffett's portfolio. 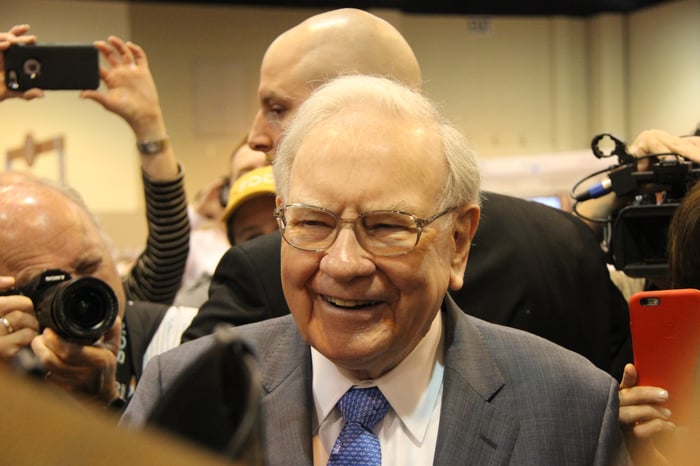 We know he loves it, because he owns it

Rich Smith (Amazon.com): My pick today is kind of a gimme -- a stock we know Warren Buffett not only would love but actually does love and in fact already owns through Berkshire Hathaway.

Last month, at long last, Berkshire Hathaway added Amazon to its portfolio. And Berkshire didn't just nibble, either. Its 483,300-share investment in Amazon is worth roughly $840 million at today's prices. So why did he buy it? Why does Buffett love Amazon, and why should you?

I've spoken many times in the past about Buffett's fascination for tollbooth businesses, where a company builds a business off of collecting money from customers who really have little choice but to use its services. And Amazon increasingly fits that definition.

Consider: 100 million customers subscribe to Amazon Prime. Having shelled out $120 for their membership, these shoppers are naturally more inclined to do a disproportionate amount of their shopping on Amazon's platform. Moreover, to get access to these customers, third-party merchants pretty much have to partner with Amazon, too.

Result: 7.7% of all retail sales in the U.S. now flow through a single company: Amazon.com.

Granted, buying into such a successful company doesn't come cheap. Amazon stock now sells for 41.4 times trailing free cash flow. Still, given the company's record of past success and analyst predictions of future growth -- 36.1% annualized earnings growth is the current consensus on Wall Street -- Amazon is arguably worth the premium price.

And it's not just me saying so. It's also Warren Buffett.

Keith Noonan (Waste Management): Rather than chasing explosive growth in speculative tech businesses or taking a flier on the latest potential sensations to hit the consumer goods space, Buffett has built a reputation for pursuing and sticking with businesses that might rightly be described as "boring." This has caused Berkshire Hathaway to miss out on some exciting growth stories in recent years, but the results of this strategy over the long term are undeniable. Waste Management stock is boring in a way that Buffett might love, and it's not hard to imagine the company putting up solid performance down the line.

The simple fact is that the waste-removal industry is unlikely to see much in the way of big upheavals. People inevitably use products and discard trash, and that waste has to go somewhere. There's little potential for disruption in the industry, and it's also unlikely that Waste Management will have to contend with much in the way of new competition. Like other trash removal and storage specialists, the company has what essentially amounts to a territorial monopoly in the regions in which it operates. Governments contract with Waste Management, and even if a new competitor wanted to move in on the company's turf, getting zoning approval for a dump site that allows for close and efficient storage tends to be a nightmare.

Changes to funding bills and regulations present potential curveballs, but the high start-up costs and other barriers to entry make it unlikely that competitors will be able to swoop in on the company's business and attempt to undercut it.

So the company looks to have a sturdy, defensible moat, and it has opportunities for steady growth as it gradually hikes service fees, acquires new businesses to expand its service area, and finds ways to operate more efficiently. Buffett would probably also appreciate the fact that Waste Management pays a dividend. Its yield isn't huge at roughly 1.8%, but the company has raised its payout for 15 years running and has safe payout ratios. With its relatively recession-proof business and a moat that's likely to stave off would-be competitors, Waste Management stock appears to fit the Buffett mold.

Chuck Saletta (McDonald's): Warren Buffett is famous for regularly buying his breakfasts for $3.17 or less at McDonald's, choosing his meal in part by how "prosperous" he is feeling that particular morning. For a time, Buffett did own McDonald's stock, and there's a lot the company has going for it that would still make it worthy of his consideration today.

For one thing, McDonald's pays a dividend that has increased every year since the company started paying dividends in 1976. That dividend is decently covered, representing less than 60% of the company's earnings, which gives good reason to believe the growth can continue as long as its earnings continue to grow. While Buffett's Berkshire Hathaway does not pay a dividend, most of his top holdings are dividend payers. Buffett appreciates receiving dividends as a way to generate cash for further investing.

For another, McDonald's has been famously described as a real estate company that happens to sell burgers and fries. While it's not necessarily the real estate itself that Buffett's interested in, the reality is that a lot of successful real estate investing is based on having a long-term focus and substantial patience. That long-term focus plays nicely with Buffett's famous saying that "our favorite holding period is forever."

Finally, McDonald's has a strong tradition of generating -- rather than consuming -- cash. Its operating cash flow has consistently been stronger than its reported earnings over the past several years, and its capital spending also routinely clocks in at well below those cash flow levels. That strong cash flow is a clear sign of a business capable of generating wealth for its owners, which is a trait Buffett clearly appreciates.