What do you call a space launching pad when it launches not rockets but airplanes -- albeit airplanes carrying rockets?

In Britain, they call it Spaceport Cornwall, and it's the cornerstone of the United Kingdom's efforts to create a "domestic satellite launch capability," according to the UK Space Agency. The project aims to take Cornwall Airport Newquay, the primary airport servicing Cornwall on England's far southwestern tip, and upgrade it to accommodate flights of rocket-carrying airplanes. These planes will take off from the airport, fly to altitude, and release their rockets mid-flight. From there, the rockets will blast the rest of the way into orbit while the plane returns to land at the airport again.

In so doing, says primary beneficiary Virgin Orbit, the project will "bring launch back to Britain." 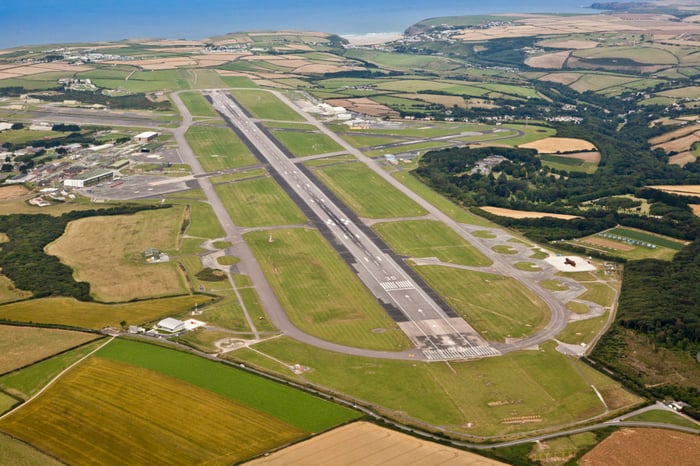 From Earth to space, with one brief layover in the air

So what is Virgin Orbit, and what does it have to do with all this? Virgin Orbit is one of multiple subsidiaries of Sir Richard Branson's Virgin Group. Its sister company Virgin Galactic is probably better known -- that's the one aiming to start a "space tourism" business as early as this year, using White Knight Two (WK2) mother ships and SpaceShipTwo (SS2) rockets to send passengers on suborbital flights to space and back.

Virgin Orbit is itself an offshoot of this initiative, and it will utilize a modified Boeing 747 Cosmic Girl jumbo jet as its mother ship, firing off LauncherOne rockets to carry satellites into orbit. In so doing, Virgin Orbit will give Britain the ability to launch satellites from British soil rather than hiring rides on "vertical" launch rockets operated by companies such as Arianespace and SpaceX, launched from French Guiana and America, respectively.

Admittedly, this launch capability will be limited. LauncherOne is designed to carry a payload of no more than 500 kg (and more often 300 kg) to orbit, and that's unlikely to increase. LauncherOne's payload will be limited to Cosmic Girl's ability to carry LauncherOne, after all.

Still, when Spaceport Cornwall (and Cosmic Girl and LauncherOne) are operational, the whole combination will create new competition for Northrop Grumman's (NOC -0.99%) similar air-launched satellites business utilizing an L-1011 Stargazer aircraft to fire off Pegasus rockets into orbit. Virgin Orbit will also be charging much less than Northrop does -- somewhere between $6 million and $12 million per launch compared to Northrop's current price tag of $56 million.

What's most intriguing about this project, though, isn't the high hopes Britain has for Virgin Orbit but the small size of the expenditures being discussed. According to Virgin's press release last week, converting Cornwall Airport Newquay -- an existing, operational airport -- into a functioning Spaceport Cornwall will cost all of:

In the context of space launch, where $35 billion megaprojects are more common, the sums being spent in support of the Cornwall spaceport project hardly even rise to the level of rounding errors. And that just illustrates how incredibly cheap it might be for Virgin Galactic and Virgin Orbit to expand their businesses and challenge other companies with more "traditional" plans for launching rockets (i.e., vertically, from launchpads).

Once again, it looks like the cost of space launch -- and of access to space for companies incorporating space work into their business plans -- is falling. And this time, we have Britain and Virgin Orbit to thank for it.

Why WestRock Stock Got Rocked for a 14% Loss Today