The Blue Oval just beat most of its rivals in a key measure of build quality.

For the third year in a row, the Blue Oval beat all of its domestic -- and Japanese -- rivals in a key measure of quality, the J.D. Power Initial Quality Study. The study, released on Wednesday, ranks Ford just behind Korean automaker Hyundai and its corporate cousin Kia among mainstream automakers -- and ahead of all of its Detroit, Japanese, and German rivals.

What the Initial Quality Study is -- and isn't

The J.D. Power Initial Quality Study, or IQS, is a survey that asks participants to report problems with new vehicles that occurred in the first 90 days of ownership. It's distinct from the other important J.D. Power automotive-quality study, the Vehicle Dependability Study (VDS), which asks about problems in the third year of a vehicle's life.

The 2019 edition of the IQS covers almost every auto brand sold in the United States, 32 brands total. The few exceptions include low-volume luxury brands like Ferrari and Aston Martin, as well as Tesla, which has bucked industry practice by choosing not to make its customer registration data available to J.D. Power.

IQS results are reported by brand, as you'll see in the chart below. There are also special mentions for the top-performing models in major vehicle segments. (Ford had a surprising win in one segment -- more on that in a bit.)

Long story short, the IQS gives us a look at how well an automaker's vehicles are assembled. Together with the VDS, which tells us something about how well vehicles hold up over time, we can get a pretty good idea of how each brand is faring on "quality."

Got it? Let's take a look at this year's results.

The chart below, supplied by J.D. Power, shows how each auto brand performed. The score shown is the average number of problems reported per 100 vehicles. Lower scores mean fewer problems. 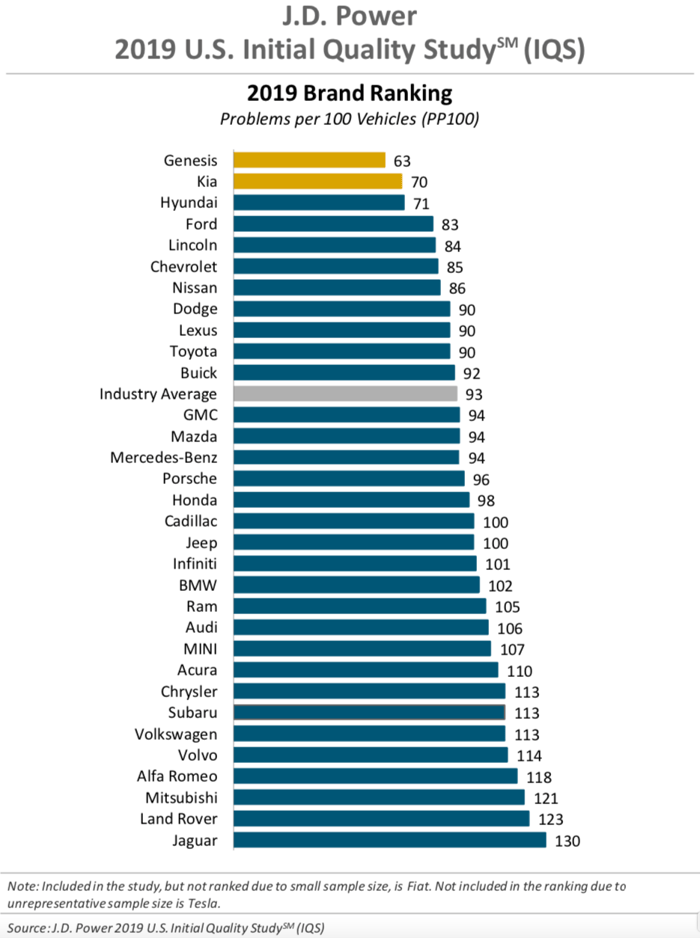 (The Ranger's win is a surprise: Because assembly quality tends to improve over a given model's lifetime, as the factory works to perfect its procedures, new models often fare relatively poorly in the IQS.) 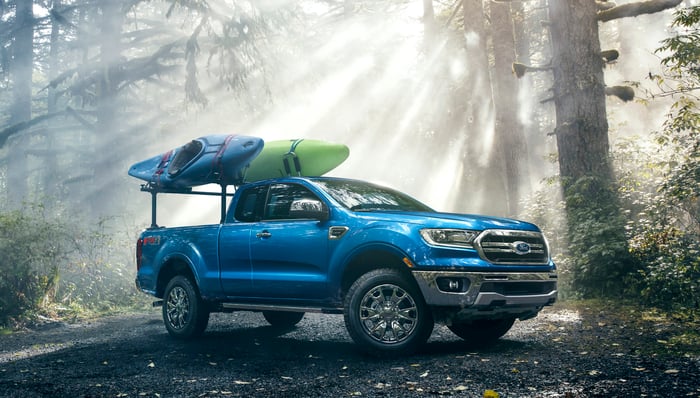 Ford's quality is still going in the right direction

This is the third year in a row in which the Ford brand has outpaced all of its Japanese and American rivals, but it's the first time that Ford has managed to beat all of the German brands as well. (Volkswagen subsidiary Porsche has long been a fixture at or near the top of the IQS, but it fell to below average in 2019.)

Here's how Ford's result -- fourth place with 83 problems per 100 vehicles -- compares with its results over the last several years:

Clearly, the trend has been going in the right direction for Ford for several years now. For several years before 2017, Ford was hit hard in the IQS by issues with its MyFord Touch touchscreen system, which was poorly designed and buggy. But its successor, SYNC 3, which Ford began rolling out for the 2017 model year, has proven to be much more reliable and easier to use.

J.D. Power doesn't release brand-by-brand details. But Dave Sargent, the company's vice president of global automotive, said that the latest high-tech driver-assistance aids were more frequently cited as trouble spots in this year's survey responses. Ford, like other automakers, has been adding advanced driver-assist systems to more and more models -- not only to improve safety, but to help pave the way to fully self-driving vehicles.

Why this matters for Ford investors

The Detroit automakers, including Ford, have long been seen by consumers as lagging import-brand rivals in quality. That has held back sales of new vehicles to some extent, and it has also had an impact on "residual values," the values of leased vehicles at the end of their leases.

Vehicles that rate highly on measures of reliability tend to earn higher residual values because they're more in demand as used cars. That's a competitive advantage: Higher residual values allow an automaker to offer more attractive lease terms to new-vehicle shoppers, to generate more profit from captive-finance subsidiaries (like Ford's subsidiary Ford Credit) that underwrite leases, or both.

While Ford would surely like to beat its Korean rivals one of these years, it's doing what it needs to do to stay a bit ahead of its other competitors on this key measure of quality. That's not big news, but it is good news for Ford investors.