Ford Motor Company (NYSE:F) finally has something to crow about on the quality front. The Blue Oval's namesake tied for fourth (and second among non-luxury brands) in the latest edition of J.D. Power's Initial Quality Study. The Ford brand didn't just beat both of its old Detroit rivals. It also outscored all of the Japanese brands -- including vaunted Toyota (NYSE:TM).

It's the best showing for Ford in the 31-year history of the report, and it represents a big improvement from just a few years ago -- an improvement that should help Ford's pricing, margins, and residual values over time.

That improvement is the result of a years-long fixation on quality at Ford, as well as the decision to make a big upgrade to a troublesome technology feature. A big improvement in an important measure of auto quality

J.D. Power's Initial Quality Study, or IQS, is one of several widely watched indicators of automotive quality and reliability. Published every June, the IQS measures problems with new vehicles in the first 90 days of ownership. (Another J.D. Power study, the Vehicle Dependability Study, looks at problems in the third year of ownership to see how well vehicles hold up over time.)

This year's edition of the IQS was based on responses from nearly 80,000 people who had bought or leased a 2017-model-year vehicle. Each of those people answered an extensive survey at some point between February and May of this year.

The IQS covers 33 auto brands, including nearly every brand of vehicle sold in the U.S. (There are a few exceptions: Tesla has chosen not to share its customer registration data with J.D. Power, and there likely aren't enough responses to give meaningful results for exotic-car brands like Ferrari or Aston Martin.)

Here's how the contestants placed in this year's edition of the IQS: 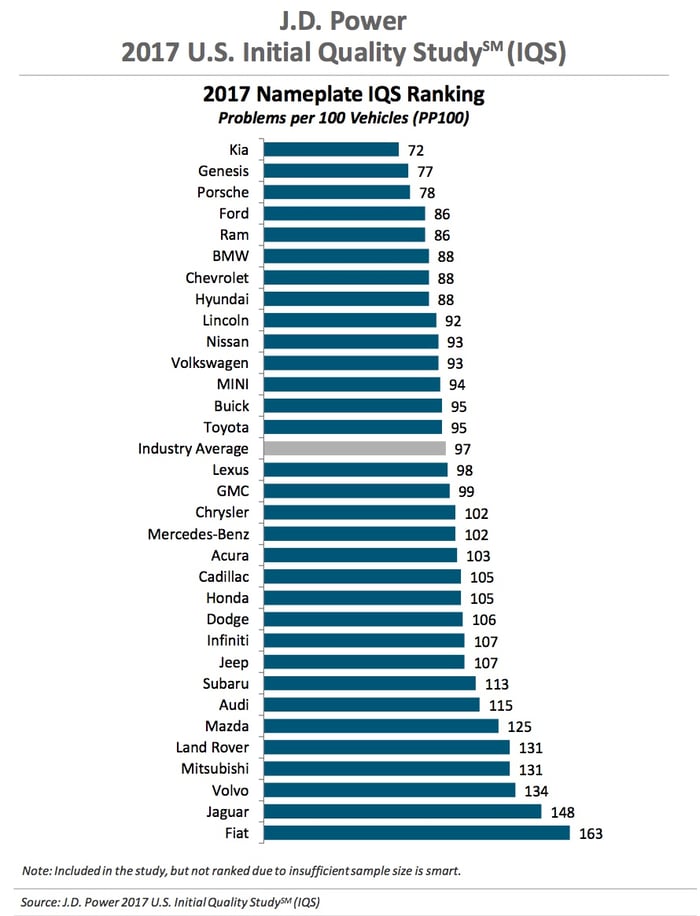 The Blue Oval has come a long way. What has changed for Ford? A lot of things, but perhaps the most consequential change was Ford's decision to scrap its troubled MyFord Touch touchscreen system in favor of an all-new and much more robust system, called SYNC 3.

Why SYNC 3 was the key to boosting Ford's quality

By 2012 or so, Ford's vehicles were better in just about every way than the models it had been building a decade earlier. The fit and finish, interior quality, reliability, fuel economy, and the general overall goodness of Ford's products had finally reached rough parity with the Japanese brands it had been chasing for years.

But a recent innovation was clobbering its quality rankings: the MyFord Touch touchscreen system. MyFord Touch was so bad that in August of 2012, Consumer Reports took the unusual step of devoting an entire article to slamming Ford's system. (That link may require a subscription, but you can get the gist here.) A year later, angry owners filed a class action suit over the system's flaws.

Even while it was rolling out a series of updates and patches for MyFord Touch in an effort to address the problems, Ford started working on what would become the much-improved SYNC 3 system in 2014. For SYNC 3, Ford gave up on the aging Microsoft operating system that had powered MyFord Touch in favor of a much more robust operating system from QNX, a subsidiary of BlackBerry (NYSE:BB). 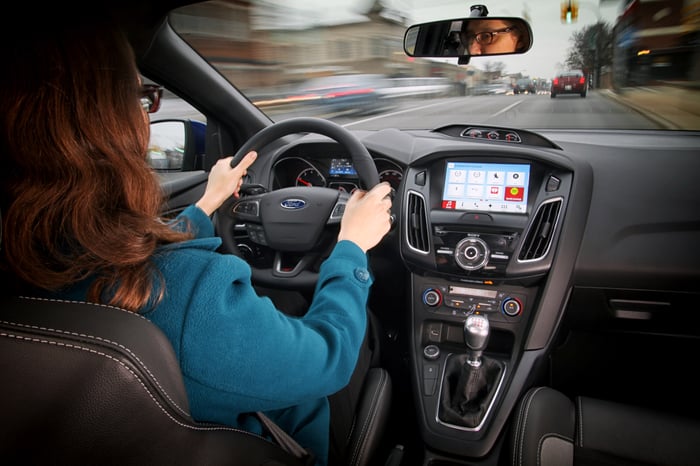 Ford began rolling out the much-improved SYNC 3 touchscreen system late in 2015. It's now available on most Fords sold in the U.S. Image source: Ford Motor Company.

Running on new hardware from Panasonic, QNX turned out to be the right foundation for the system that would end most of the complaints about MyFord Touch. Critics (including Consumer Reports) praised the new SYNC 3 system as a significant improvement.

Ford began rolling out SYNC 3 on new models late in 2015. It's now in about 70% of the vehicles Ford sells in the U.S., the company said last week.

For Ford investors: Does the IQS matter?

Does it matter? The short answer is yes, but it requires a little explanation.

The IQS matters to the extent that it helps boost the general perception of Ford's quality. Unlike, for instance, Consumer Reports ratings, J.D. Power results can be used in advertising and sales -- you can bet that Ford dealers will be talking up this year's IQS result to customers.

Of course, it's just one tool out of several, and to the average retail buyer, others (such as Consumer Reports) may have more impact. But it's a clear sign that Ford has made big quality improvements, and in time those improvements will show up in other ratings as well.