Will Upwork be able to prosper in light of challenges to monetize its platform and deal with competition?

Upwork (UPWK 5.05%) is a recent IPO that operates the leading online marketplace for freelancers in terms of by dollars spent by employers. The company makes money by connecting freelancers with projects through its platform for a fee and charging employers fees related to payment processing and other related servicing charges.

Upwork has an interesting business model, but it is not without its challenges. For one, a number of competing platforms exist that could threaten to take away its customers. In addition, freelancers are incentivized to operate independently once they are connected with employers due to the fees they are required to pay to use the platform.

The Upwork platform delivers value in a few key ways. First, it maintains a bustling marketplace where freelancers know there will be many job opportunities and employers know there will be many freelancers. Second, the company screens freelancers and employers, weeding out people and businesses that do not meet basic quality standards. Finally, Upwork facilitates project management with communications tools, milestone planning, and payments processing.

Based on its reported data, Upwork has a large and growing platform with a fast-growing revenue base. However, this data could mask some of the challenges faced by the business.

Competition from other marketplaces

Upwork has been able to ride the "gig economy" trend that has seen more people willing to build careers as freelancers and more businesses willing to use project-based labor. However, a few other online freelance marketplaces have popped up to capitalize on the gig economy trend as well, including freelance.com and Fiverr (FVRR 7.07%), which recently went public. Today, Upwork primarily competes on the basis of its scale and reputation, but if the company is not careful, it could see competitors eat away at its customer base.

Upwork's biggest selling point is its size. Ultimately, freelancers are going to choose Upwork over another platform if it has the best job opportunities for them, and with over 100,000 active employers, Upwork appears to have an edge over its competition in terms of attracting talent. Because Upwork can attract the most talent, it will also continue to attract the most employers. When a platform is more useful the greater its scale, this is referred to as a network effect.

However, there is nothing stopping a freelancer from also using a competing platform such as Fiverr. If freelancers find that it is easier or more lucrative to use another platform, they will use Upwork less.

Competition among platforms is good for freelancers but raises the bar for Upwork. While the company appears to have an edge today due to its large scale, it ultimately doesn't own the talent or control the projects, and it will always be at risk from competition as a result. 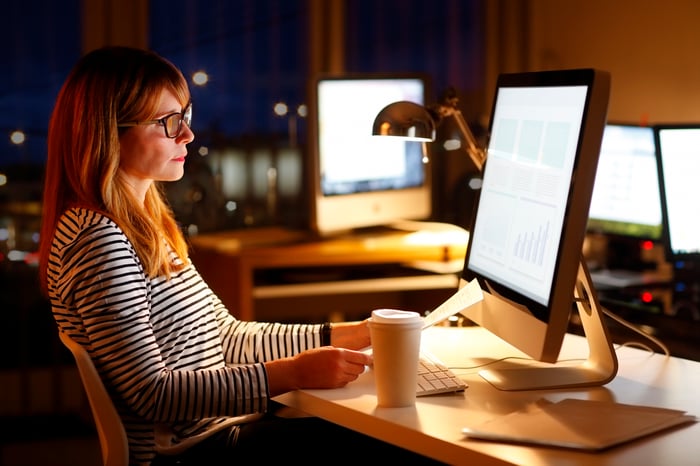 Keeping payments on the platform

The largest source of Upwork's revenue is the cut it takes from payments made to freelancers. For each project, the company takes 20% of a freelancer's first $500, 10% of the next $9,500, and 5% for any amount above $10,000. Because Upwork is taking a cut of each payment, freelancers are incentivized to request payment from employers outside of its system. Upwork has a few measures in place to discourage this, but ultimately, it cannot stop employers if they decide to pay freelancers by other means.

One benefit for freelancers who get paid via Upwork is that Upwork provides a payment guarantee for completed work. It does this by requiring employers to deposit cash in escrow up front that is delivered to freelancers when work is completed. This is valuable to freelancers, who in most cases have established contact with employers only online. However, if a freelancer trusts an employer and establishes a long-term relationship, it wouldn't necessarily make sense to continue paying Upwork's cut.

From the employer's perspective, it may just be easier to use Upwork to manage projects and process payments, especially if the employer is managing multiple freelancers. The employer doesn't directly pay the fee as a percentage of payments and gets the benefit of using Upwork's project management software.

Despite incentives for freelancers to request payment outside the Upwork platform, Upwork has managed to show strong payment retention metrics. For 2018, the company reported that spending retention was 108%. Spending retention measures how much money employers spent relative to how much they spent one year prior, including employers that stopped using Upwork. Therefore, a retention rate above 100% means that the remaining employers offset those who dropped off by spending far more on average than they had in the prior year.

Upwork's robust retention rate suggests that its model is succeeding despite the challenges.

Is Upwork a good business?

Upwork certainly has the potential to be a great business. As a marketplace business, Upwork doesn't manufacture a physical product. Instead, it monetizes relationships facilitated on its platform. Online marketplace businesses can produce high margins and stable cash flow -- just look at the long-term success of eBay.

Upwork already operates the leading freelance marketplace, which provides a network effect advantage. However, Upwork isn't the only large platform, and if the company doesn't stay effective and innovative, it could lose out to the competition.

The good news is that Upwork's revenue model appears to be working, as it has shown positive retention metrics. It is also fortunate to be riding the gig economy trend, which has helped it generate strong sales growth. If Upwork can maintain its leadership position as an online freelance marketplace, the business will grow stronger and stronger as it matures.

Why Upwork Stock Just Went Down Instead
405%