Shares of Levi Strauss (NYSE:LEVI) were heading in the wrong direction today after the jeans maker posted second-quarter earnings results, its second report as a publicly traded company, as profits fell. 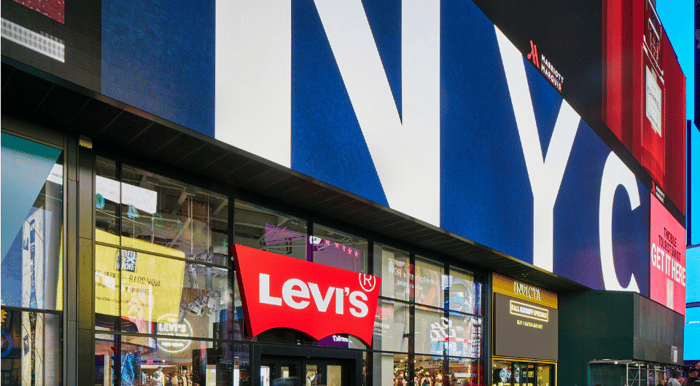 The company said revenue was up 5%, or 9% in constant currency, to $1.31 billion, edging out expectations of $1.30 billion. Direct-to-consumer revenue, which includes company stores and e-commerce, rose 9%, while wholesale revenue was up 3%.

Higher advertising and promotion expenses pushed operating profit down 19% to $63 million, and adjusted net income fell from $83.4 million to $69.3 million. Still, adjusted earnings on a per-share basis were $0.17, beating analyst estimates of $0.13.

CEO Chip Bergh said, "Our second quarter and first half results reflect the continued strength of our diversified business model as we delivered broad-based growth across all brands, regions and key product categories despite a challenging retail and macroeconomic environment."

Nonetheless, the company faced challenges in the U.S., where a number of apparel retailers are closing stores. U.S. wholesale revenue, which makes up a third of the company's business, fell 2% in the quarter.

Levi's actually raised its guidance for the full year, calling for constant-currency net revenue at the high end of the mid-single-digit range, up from just mid-single digits, and called for adjusted EBIT margin to increase by about 10 basis points.

Bergh told Reuters that the forecast does indicate sales growth will be softer in the second half than in the first half. Also, investors were likely disappointed by declining profits. Still, the primary reason for today's slide may be that the stock had popped so much in its IPO, surging 31% in its debut, that it was due for a correction. Today's report may just reflect that investors are tempering their expectations for the company.