Please ensure Javascript is enabled for purposes of website accessibility
Free Article Join Over 1 Million Premium Members And Get More In-Depth Stock Guidance and Research
By Adam Levy - Jul 15, 2019 at 11:30AM

Apple, Disney, WarnerMedia, and NBCUniversal are laying out billions.

Netflix ( NFLX -0.09% ) notably spends billions every year on content -- it's expected to lay out about $15 billion in cash for content in 2019 -- but it also has 150 million global subscribers. Disney+, HBO Max, Apple TV+, and Comcast's unnamed service all have zero subscribers.

Nonetheless, they're all spending like they already have tens of millions of subscribers. Apple is reportedly spending $15 million per episode of See, a sci-fi series starring Jason Momoa, according to The Wall Street Journal. Disney might be spending the same amount on The Mandalorian, a Star Wars series. AT&T's WarnerMedia and Comcast's NBCUniversal just spent hundreds of millions buying back the exclusive rights for Friends and The Office, respectively. 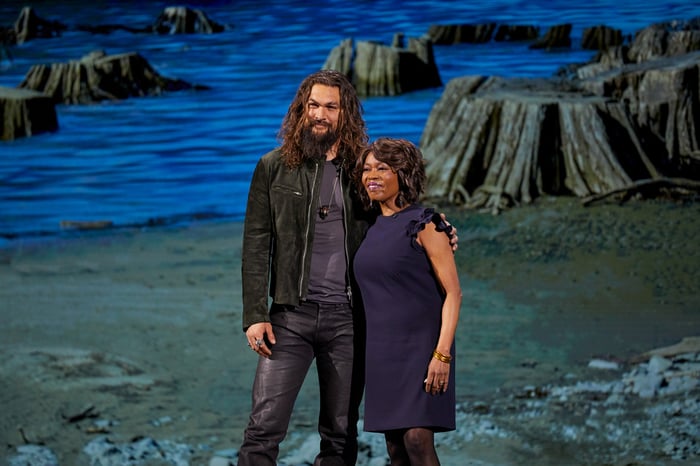 It's important to consider the scale (and potential scale) of each company's service to determine whether it's making a smart move spending so much on series and films.

Netflix's cash budget of $15 billion and its 150 million subscribers means it's spending about $100 in cash per subscriber this year. Netflix generates more in subscription revenue per subscriber -- about $120 per year -- than it spends on content per subscriber.

Spend per subscriber ought to decline considerably over the next few years. The growth in Netflix's content spending ought to slow as it loses high-priced licensed content like Friends, The Office, and Disney's film library. Meanwhile, Netflix's subscriber base and revenue per subscriber should keep climbing relatively quickly.

Even if the competition gets off to a strong start, it's hard to see any of the forthcoming streaming services spending as efficiently as Netflix on content.

How much is the competition spending?

Disney says it's going to spend about $1.5 billion licensing content from its studios and another billion on original content for Disney+. Those numbers will ramp up to around $2.5 billion each by 2024. For Disney to spend as efficiently as Netflix, it'll need around 50 million subscribers. Even then, it's average revenue per user will be lower than Netflix, as it's priced at just $7 per month. The company expects to reach 60 million to 90 million subscribers within five years, so if it meets expectations, that level of spending isn't irrational.

WarnerMedia is committing to a significant ramp-up in content spending for HBO Max. It's increasing HBO's original content budget by 50%, or about $500 million per year. It's paying about $85 million per year just for Friends, and it's also producing some big-budget exclusive originals.

Importantly, investors should consider the likelihood that most of HBO Max's early subscribers will be cannibalized from HBO itself, so the incremental revenue per subscriber is only a few dollars. That makes the spending less efficient. AT&T expects the service to reach 70 million subscribers, but management didn't say what kind of impact they expect on regular HBO subscribers.

Apple is spending about $1 billion on its originals, which will make up the entirety of Apple TV+. The iPhone-maker has proven adept at selling subscriptions with Apple Music, reaching 60 million subscribers recently. For it to reach a level playing field with Netflix, it would need 10 million subscribers. But Apple may benefit from increased hardware sales if Apple TV+ becomes popular, which can help offset lower content spend efficiency.

Comcast's plans are still largely unknown. It's paying $100 million per year for The Office, but beyond that it's not clear how much the company plans to spend on content. Additionally, it'll offer its service for free to all cable subscribers, monetizing it with advertisements. That'll make it incredibly difficult to judge whether its content investments are paying off.

There's no doubt these content budgets are extraordinarily high, and it's highly unlikely any of Netflix's competitors will be able to spend as efficiently as the streaming leader for a few years.

But all four forthcoming competitors are mitigating their risk.

Disney has two other streaming services under its control, including Hulu, which has 28 million subscribers. It can shift content to Hulu if it makes more sense there.

WarnerMedia is building HBO Max on the back of HBO and its substantial subscriber base.

Apple is betting on its active install base to help it sell more subscriptions.

And Comcast is tying its streaming service with cable subscriptions, an industry where it's heavily invested.

Those factors make the massive content budgets a bit easier to stomach for investors.