The market enjoyed robust gains on Tuesday, as investors are optimistic that trade talks between the U.S. and China will show some meaningful progress. U.S. trade negotiators are reportedly heading to the Middle Kingdom next week to continue face-to-face negotiations. 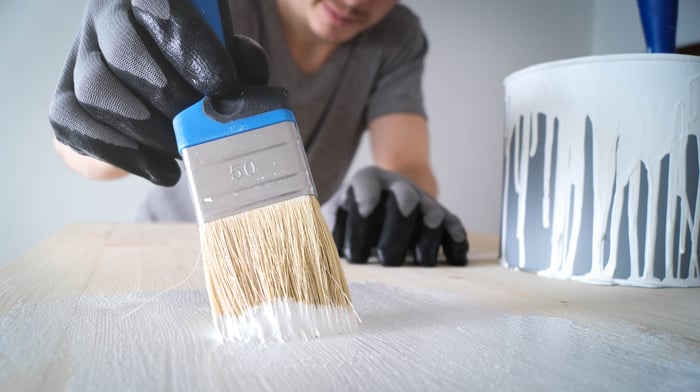 Sherwin-Williams announced upbeat earnings results this morning before the market opened, sending shares higher by 8%. The release showed the paint maker hitting record levels of revenue, EBITDA, and profit before taxes. Sherwin-Williams posted revenue of $4.88 billion, slightly missing the consensus estimate of $4.94 billion, but adjusted earnings per share of $6.57 topped expectations of $6.37 per share. The company reaffirmed its fiscal 2019 guidance that calls for $20.40 to $21.40 in adjusted earnings per share, compared to the $18.53 it posted in fiscal 2018.

Stanley Black & Decker also put up solid earnings in the second quarter, and the stock jumped 7%. The toolmaker's revenue grew 3% to $3.8 billion, right on target with what analysts were modeling for, while adjusted earnings per share of $2.66 beat expectations of $2.54 per share. Strong execution allowed the company to overcome $110 million in headwinds related to tariffs, commodity pricing, and currency fluctuations. Stanley Black & Decker reaffirmed its 2019 guidance, which it had raised in April, and still expects adjusted earnings per share for the year to be $8.50 to $8.70. "This 2Q outperformance is a testament to the agility and determination of our 61,000 employees around the globe," CEO James Loree said on the conference call.

Shares of Harley-Davidson gained over 6% after the motorcycle manufacturer provided optimistic comments on how it is navigating President Trump's trade war with China and delivered an earnings beat. Consolidated revenue was $1.63 billion, including $1.43 billion in sales in the core motorcycle segment. That translated into adjusted earnings per share of $1.46, topping the average analyst estimate of $1.20 per share. Harley-Davidson said it had received regulatory approval to ship motorcycles assembled in Thailand to Europe, which will substantially reduce its tariff burden associated with that region. The approval process took longer than anticipated, and the company is reducing its full-year outlook as a result. Harley-Davidson now expects to ship 212,000 to 217,000 motorcycles in 2019, down from its prior guidance of 217,000 to 222,000. The company expects to ship 43,000 to 48,000 motorcycles in the third quarter.