Chipotle Mexican Grill (NYSE:CMG) reported second-quarter results on July 23, and there was a lot for investors to like. The fast-casual eatery continued to deliver big gains in sales and earnings, with its operating results delivering the kinds of profitability investors haven't seen in several years.

The biggest driver behind the company's recent success? Making it easier and faster for customers to order and then get their hands on their burrito or bowl fix. Chipotle's sales were up 13% to $1.4 billion, with digital sales nearly doubling. This big boost increased transactions at existing Chipotle restaurants 7% higher, with total comps -- sales at restaurants open more than one year -- up 10% in the quarter. 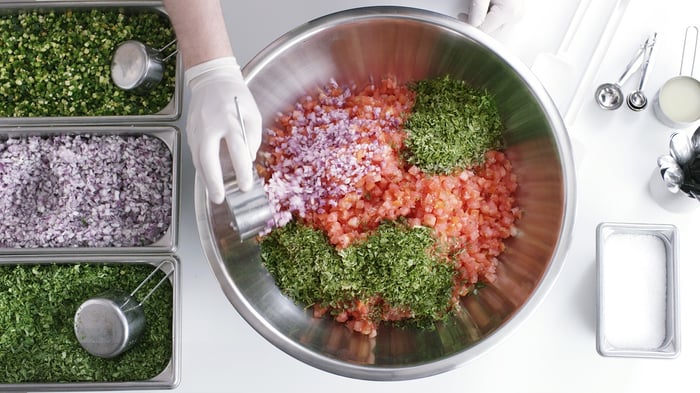 Let's take a closer look at how those sales gained really boosted Chipotle's bottom line, and how that could play out into the future.

As mentioned, Chipotle delivered solid 13.2% sales growth, a great number considering the chain only opened 19 net new locations in the quarter. Simply put, the 10% comps growth the company delivered was incredible, and it's likely that the vast majority of that growth was delivered by the expansion of its digital ordering platform.

Digital sales were up 99% in the quarter, making up 18% of total sales and driving the bulk of its transaction growth. Moreover, these new incremental sales helped the company gain significant operating leverage. Restaurant-level operating margin increased from 19.7% to 20.9%; that's even after factoring in food and packaging expenses of 33.7% of sales versus 32.6% of sales last year.

Moreover, Chipotle reported a big boost in total operating margin to 8.4%, up from 5.4% year-over-year. That was in large part due to non-recurring impairment and restaurant closer expenses in last year's second quarter, but higher advertising and other corporate expenses mostly cancelled out the benefit of "lapping" last year's one-off expenses.

Chipotle's digital ordering platform, which includes a pick-up location in stores that doesn't require waiting in line, is really resonating with customers, providing the lion's share of traffic growth, something that had been Chipotle's biggest problem over the past few years. Moreover, it wasn't just traffic that drove the company's growth; about 3.5% of its comps gains were increased ticket amounts, a product of both higher prices and add-on orders.

Heading into the second half of the year, management has raised the bar, calling for full-year comps growth in the high single digits after growing comps 10% in the first half of the year. The combination of higher prices and increased orders is really delivering, driving operating margins and earnings to the highest levels we have seen since 2015.

Can Chipotle continue counting on digital orders and expanded delivery options to fuel continued growth? The good news is the company plans to accelerate new restaurant openings in the second half of the year, too. So far this year it has only opened 35 new locations, 120 restaurants short of the high end of its full-year target of 155 new restaurants.

Yet even with the strong results, Chipotle is still well short of the peak per-restaurant sales and profitability it delivered in 2015 before you-know-what happened and kept customers away. Per-restaurant average sales passed $2.5 million in 2015, but that number fell below $2 million in recent years, before the strong comps recovery this year brought average sales back above $2 million.

The big takeaway? The average Chipotle still has room to add a lot more sales volume, particularly considering prices are much higher today than in 2015. If management can keep delivering on initiatives like digital ordering and, ahem, delivery, Chipotle's best days could still be to come.