In an investing environment in which many market participants are feeling more jittery about the future, defensive industries like consumer staples become more attractive. Nestle (OTC:NSRGY) is a giant in the food industry, and many turn to the company as a stalwart that can handle whatever economic conditions it has to face. Even so, Nestle has worked hard to try to overcome headwinds in the segment and stave off the negative impacts of tough economic conditions throughout much of the world.

Coming into Friday's first-half financial report, Nestle investors wanted to see that the food company could keep up the encouraging performance that it's seen in recent periods. The numbers that Nestle reported were consistent with continued growth, and the food giant is hopeful that it can keep moving forward with its successful initiatives well into the future. 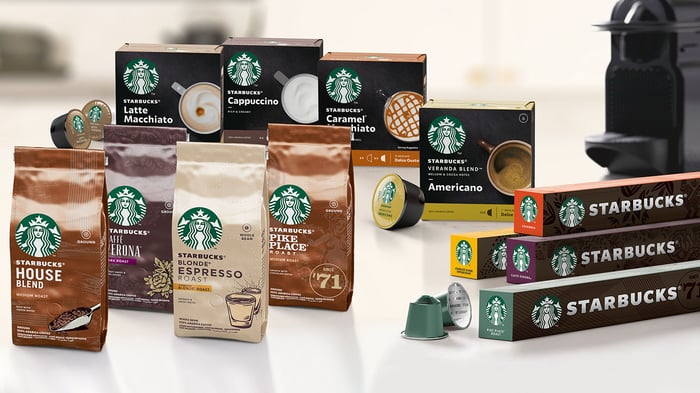 How Nestle fared in the first half

Nestle's report for the first half of 2019 kept its favorable trends going. Total sales for the period were up 3.5% to 45.5 billion Swiss francs. Net profit was down 15% to 5.12 billion Swiss francs, but most of that decline was due to extraordinary items in the prior-year period. Taking those items into account, the company's adjusted earnings of 2.13 Swiss francs per share was up 15% from year-ago levels.

As we've seen in previous quarters, the internal metrics that Nestle looks at showed considerable fundamental strength. Organic growth accelerated to 3.6%, with a full percentage point of pricing power supplementing the 2.6 percentage points of real internal growth. The company pointed to strength in the U.S. and Brazil as being the most significant contributors to Nestle's overall gains. Merger and acquisition (M&A) activity produced enough additional revenue to offset negative effects from currency fluctuations.

Nestle's segment results were unusually consistent. The leading grower overall was the Americas division, with organic growth of 3.9% and a big strategic M&A move that led to total reported growth of almost 11%. However, the Asia, Oceania, and sub-Saharan Africa segment saw 3.3% organic growth, and even the Europe, the Middle East, and northern Africa segment managed to post a 2.4% organic growth number. A strong Swiss franc hurt the company's results in those latter two areas, however, making the reported sales growth for the segments extremely low. In terms of operating profit, the Americas did the best, with double-digit-percentage gains, while Europe was close to flat and Asia saw only modest bottom-line increases of between 2% to 3% year over year.

Nestle's other businesses segment saw the strongest growth in the company at 7.4%, with skin health leading the way higher and solid performance from both Nespresso and the health science unit. In Nestle's water business, however, organic sales gains lagged at just 1.4%.

CEO Mark Schneider kept his explanation of the situation simple. "Disciplined execution and fast innovation contributed to improved organic growth and profitability," Schneider said, and "our growth was broad-based with our largest market, the United States, performing particularly well." The CEO also pointed to strength in pet care, as well as the strong launch of its Starbucks brand partnership.

Nestle has every expectation that it will finish 2019 as well as it started the year. The food giant confirmed its full-year guidance, with expectations for organic sales growth companywide of about 3.5% and a solid profit margin figure above 17.5% on an operating basis. Nestle expects its underlying earnings per share to rise after taking currency impacts into account, with more efficient use of capital throughout the year.

Nestle shareholders were generally happy with the news, and the stock was higher by 1.5% on Friday following the announcement. As long as the global food leader can continue to identify and follow up on the projects that have the highest potential to contribute to growth, Nestle looks like it's following the right strategic pathway toward continued prosperity -- even if the financial markets come under more pressure.