Please ensure Javascript is enabled for purposes of website accessibility
Log In Help Join The Motley Fool
Free Article Join Over 1 Million Premium Members And Get More In-Depth Stock Guidance and Research
By Luis Sanchez CFA - Jul 29, 2019 at 9:29AM

This mall REIT advertises a near 30% dividend yield, but investors are betting that it's unsustainable.

Washington Prime Group (WPG) is a real estate investment trust (REIT) that owns and operates 108 shopping centers in the United States. On paper, Washington Prime is set to deliver an annual dividend of $1 per share, implying a nearly 30% yield on its stock price (high-yield REITs generally average 10%-14% performance). However, the eye-popping yield indicates that investors are skeptical the dividend will be maintained. The company has reaffirmed its dividend as recently as July 2019, but will it be able to make good on this promise?

Troubles at the American mall

It's no secret that consumer shopping behavior has changed in recent years. People are spending more time shopping online and less time in malls. As a result, many retailers have closed stores and quite a few have even gone bankrupt.

This is all bad news for Washington Prime, which operates malls across the U.S. The company has seen its occupancy rate at malls decline on the heels of several customer bankruptcies, including Charlotte Russe, Gymboree, and Payless ShoeSource. 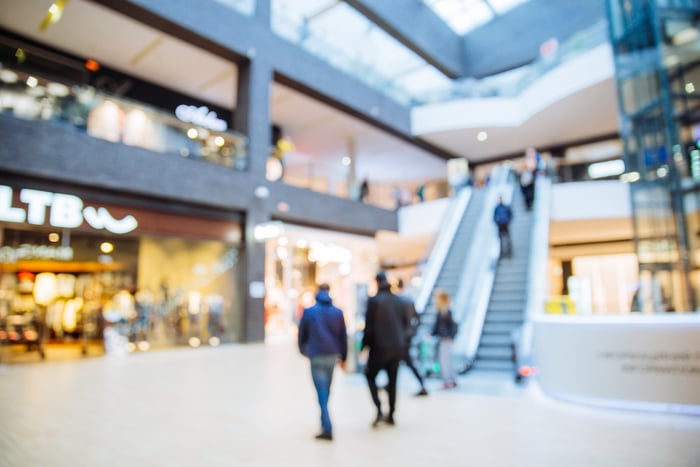 In an effort to shore up its occupancy rate and adjust for fewer department stores serving as anchor tenants, Washington Prime has had to aggressively manage its portfolio by redeveloping large sections of its malls. For example, the company had 22 (now bankrupt) Bon-Ton stores anchoring its malls and also had exposure to (also bankrupt) Sears. Washington Prime has disclosed a plan to redevelop 29 former department store locations in projects that could cost the company as much as $350 million in capital expenditures over the next five years. In some cases, the company believes it can attract new tenants such as gyms or grocery stores, but in other cases, it will be converting what used to be a store into a new mall entrance or seating area.

The loss of customers and decline in occupancy have hit Washington Prime's revenue, earnings, and cash flow, yet its dividend has remained constant. What is particularly worrying is that free cash flow has consistently come in below the company's gross dividend payments. The company has financed dividend payments by drawing down its cash balances and borrowing money. However, this is not sustainable, especially given its operational challenges.

Washington Prime has had a tough couple of years due to the decline of the American mall. The company has seen its financial performance suffer, but it hasn't adjusted its dividend policy to reflect this reality.

While the ultimate measure of a company's ability to pay dividends is its earnings and cash flow, Washington Prime's balance sheet doesn't provide the company much flexibility.

As of June 30, 2019, the company carried total debt of $4.3 billion. This amount includes debt held in subsidiaries, much of which are not consolidated on Washington Prime's balance sheet for financial reporting purposes.

In order to borrow in the debt markets, Washington Prime had to agree to certain rules referred to as covenants. For example, the company needs to maintain a total debt-to-asset ratio below 60% if it wants to avoid getting into trouble with its lenders. Washington Prime reported in its Q2 2019 earnings report that it is meeting its debt covenants, but it doesn't have much margin of safety.

Washington Prime's balance sheet is not in pristine condition. The company has kept a large debt load to finance its operations and pay dividends to shareholders. However, the company may need to cut back on its business investments or its dividend in order to keep its debt load manageable and its lenders happy.

Guidance reaffirmed but not guaranteed

During Washington Prime's most recent earnings report, it reaffirmed its previously issued guidance for cash flow and its $1-per-share dividend. The company's management is projecting confidence in the business by maintaining the dividend at current levels, but the company's policy may be unsustainable based on an analysis of the balance sheet and cash flows.

Investors haven't taken much solace in the guidance affirmation. The company's stock price is down over 20% so far this year, which is on top of heavy losses from the prior year. Investors are not taking the company's dividend guidance as a guarantee, and that is probably wise.