Both companies are in the gas industry, but that's where the similarities end. Which is the top pick for investors?

If you have no idea what on Earth I'm talking about, you're not alone. But in the energy industry, a major product is liquefied natural gas (LNG), which is dry gas -- that is, gas that's in gaseous form -- that's been liquefied to aid in transportation and handling. But that's not to be confused with natural gas liquids (NGLs), which are naturally occurring liquid petroleum products like propane. 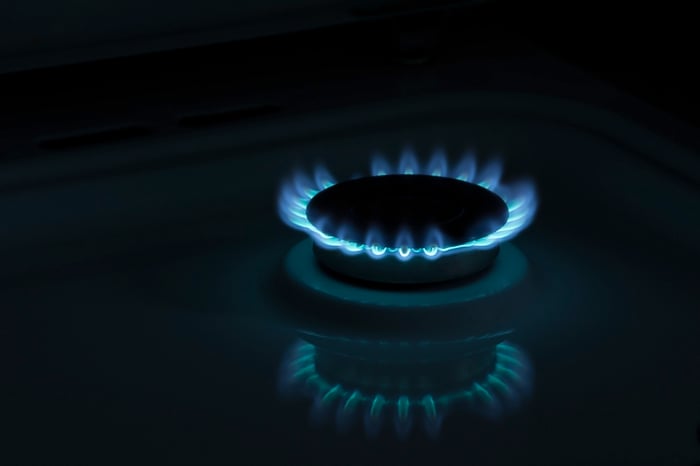 Gas, whether propane or natural gas, is a top heating fuel in the U.S. Image source: Getty Images.

Measuring these two companies against one another is actually quite difficult, because besides operating in the natural gas subsector and having similar market caps, Suburban Propane and Tellurian have hardly anything in common.

To begin with, Suburban Propane Partners, as the name implies, is a master limited partnership (MLP). In exchange for preferred tax treatment, MLPs pass on nearly all of their operating cash flow as distributions to their unitholders. As a result, they tend to have high distribution payout yields. Also, as a propane distributor, Suburban is largely immune to commodity price swings: It doesn't drill or refine the propane, it just delivers it, like it has since the business was incorporated in 1945.

Tellurian, on the other hand, is a very young company, founded in 2016. And it plans to do just about everything with LNG except the delivery. Run by longtime industry insiders, Tellurian plans to produce natural gas and ship it through pipelines to a liquefaction and export facility. Like many young companies, Tellurian doesn't pay a dividend...at least, not yet.

So how can we measure these two very different businesses against each other?

Suburban Propane may have been around for nearly 75 years, but the last few haven't been kind to the company. Suburban took on a lot of debt in 2012 to acquire a big competitor, and it hasn't been very successful in paying it down. In 2011, Suburban had just $348 million in debt on its balance sheet. At the end of 2012, that had skyrocketed to $1.4 billion. Today, it's still at $1.3 billion.

One major reason Suburban hasn't been able to pay down much of that debt is the recent trend toward warmer winters. Because propane is primarily used for heating, warmer weather translates into less demand, which hurts revenue. Indeed, over the last five years, Suburban's revenue has fallen by 51.4%.

In 2017, Suburban cut its distribution by 33%, intending to use the savings to help shore up its balance sheet. Even with that cut, though, the MLP is yielding 9.9%, which is high even for an MLP. It's a sign that investors still aren't convinced that Suburban is a good buy.

While Suburban Propane may be having some problems with its business model, Tellurian's business model is still taking shape. The fledgling company is putting all of its eggs in one basket: the Driftwood project. Driftwood will consist of a pipeline and export terminal facility for natural gas.

While the propane delivery business is suffering, LNG exports are booming. Just a few years ago, U.S. LNG exports were virtually nonexistent. By the end of 2019, the country is expected to export nearly 9 billion cubic feet of natural gas per day. Tellurian hopes that its Driftwood facility will make it a major player in LNG exportation...eventually.

I say "eventually," because although Tellurian has been successful in getting the necessary permits to build Driftwood, and has even secured a major commitment -- financial and operational -- from French energy giant Total, today the company isn't exporting anything. Even if construction goes according to schedule (and does that ever happen?), Driftwood won't export its first LNG until 2023.

That's a long time to wait, but if Tellurian's big plans pan out, it could generate $2 billion in annual cash flow. My Fool.com colleague Jason Hall did some analysis that puts that at about $8 per share. Given that the company's shares are trading at between $6 and $7, that seems like a good deal, even considering the inherent risks of investing in a speculative company.

Well, if you're an investor who's risk-averse, the winner is neither. There are plenty of less-risky investments in the energy sector, and you should probably look into some of those.

However, if you can stand the risk, I think it's better to be a young company in an up-and-coming industry than a mature company in a fading one. That's why Tellurian looks like the better buy today.