Please ensure Javascript is enabled for purposes of website accessibility
Log In Help Join The Motley Fool
Free Article Join Over 1 Million Premium Members And Get More In-Depth Stock Guidance and Research
By Daniel Miller - Aug 6, 2019 at 7:00AM

One of the most lucrative economic opportunities in our lifetime will be driverless-vehicle technology, including mobility as a service (MaaS) -- along with the "passenger economy" that will eventually be created, as passengers fill their idle time in the car while the driving is left to autonomous vehicles. That lucrative opportunity, a market Intel predicts will grow from $800 billion in 2035 to $7 trillion by 2050, is why a slew of technology companies, automakers, and parts suppliers are pouring billions into developing driverless-vehicle technology.

Identifying which companies will ultimately seize the massive driverless opportunity and thrive over the long term is no simple task. But here are a few reasons Aptiv (NYSE: APTV) looks like a leader in the field.

To better understand why Aptiv is such a good investment, it's important to understand what the company produces and what its vision is. In a nutshell, its portfolio of products and solutions revolve around creating a world with zero vehicle accidents, zero emissions, and seamless connectivity between vehicles, devices, and even smart cities. Aptiv provides leading architecture -- it's the only company to provide both the "brain" and "nervous system" of an autonomous vehicle -- and remains well-positioned to develop solutions for future mobility problems and challenges.

If you're looking for stocks poised to thrive as the driverless-vehicle megatrend gains traction, Aptiv is one of the few autonomous-vehicle pure plays. Currently, it's difficult to see which companies will eventually come out on top, and which companies will burn through piles of cash before inevitably going bankrupt or failing to develop the necessary technology. Alphabet's autonomous-vehicle company, Waymo, could end up a huge winner. So could General Motors' GM Cruise, which recently received equity investments valuing the driverless entity at roughly $19 billion -- not bad for a company acquired for less than $1 billion in 2016. Or will ridesharing companies such as Uber and Lyft (LYFT -7.96%) seamlessly transition into driverless MaaS companies?

Investors could make a sound argument for any of these companies, among many others, to end up thriving over the next few decades. But the companies mentioned above have to thrive and bet on themselves to win, whereas Aptiv can succeed no matter which tech or industrial companies come out on top, as long as it develops the driverless-technology architecture the entire industry will rely on.

Aptiv has created a host of savvy partnerships and strategies. One of Aptiv's more intriguing partnerships has been with ridesharing company Lyft. In May 2018 the two companies launched a public autonomous-vehicle service in Las Vegas, which provides travel to over 2,100 entertainment venues, restaurants and destinations. Aptiv has completed over 60,000 rides and garnered a rider rating, using Lyft's app, of 4.97 out of 5 stars. The partnership not only gathered valuable data over those tens of thousands of rides, it also proved that consumers were willing to adopt, trust, and pay for the driverless service.

Another example of how Aptiv can thrive is its partnership with the BMW Group and Intel's Mobileye; it came on board to provide a prototype computer platform to aid in perception, high-performance automated computing, and sensors. Aptiv's "brain" and "nervous system" technology should remain in high demand throughout the industry.

Further proof Aptiv's technology is in high demand is its history of awards. In April 2019, the company was recognized by Automotive News as a PACE Award winner, for its automated-driving satellite computer platform. What's even more impressive than winning the PACE Award was that it was the 21st PACE Award the company has won; Aptiv leads the industry in PACE Awards received.

Aptiv is also doing innovative testing inside driverless vehicles. Earlier in 2019 Aptiv signed a partnership with Affectiva, a Boston-based MIT Media Lab spin-off that specializes in "human perception" artificial intelligence. Affectiva owns the first multimodal interior sensing solution that can identify the complex situations and states of passengers in a driverless vehicle. Aptiv hopes that developing technology to understand all angles of the experience -- including how passengers fill their idle time while autonomous vehicles drive them -- will benefit its potential MaaS business, including its Lyft partnership service.

A final reason that Aptiv is a no-brainer investment is location. Take a look at the graphic below, and notice which country is most accepting of and ready for driverless technology: 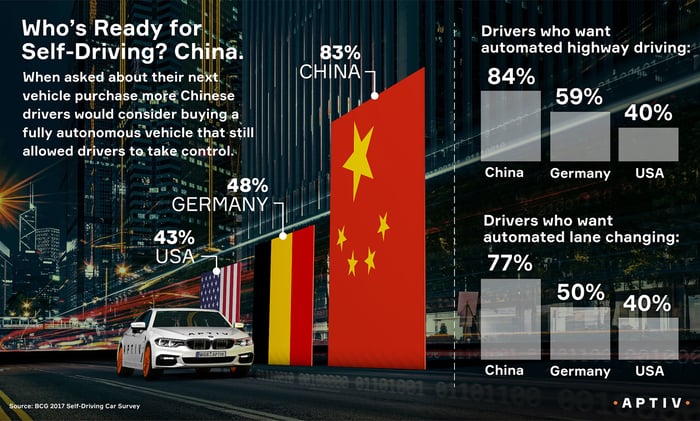 In part because of China's acceptance of driverless technology, and partly because China is also heavily encouraging the adoption of electric vehicles, Aptiv announced plans to expand its global testing with the opening of its China Autonomous Mobility Center. The move brings Aptiv one step closer to global development and adoption of driverless technology; it's one more reason that the company is better-positioned to seize the autonomous-vehicle opportunity over the coming decades than many of its competitors.

Results already speak for themselves

It's pretty clear to investors and consumers that the future of transportation will revolve around electric and driverless vehicles, as well as MaaS. That future might be in the far distance, but that doesn't mean Aptiv isn't already a solid investment. Take its second-quarter results, for instance: The company posted strong operating performance and topped estimates despite slowing global vehicle production. That's good news for investors cautious about investing in the automotive industry as light-vehicle sales slow. And it shows that Aptiv is better-prepared to outperform expectations in the face of industry headwinds, while waiting for growth in the driverless-vehicle industry to accelerate.

While we don't know which companies will come out on top of the driverless-vehicle boom, it's clear that Aptiv has the technology, global presence, and critical partnerships to carve out its position in a potentially lucrative market.