Please ensure Javascript is enabled for purposes of website accessibility
Log In Help Join The Motley Fool
Free Article Join Over 1 Million Premium Members And Get More In-Depth Stock Guidance and Research
By Lou Whiteman - Aug 6, 2019 at 7:15AM

Investors ran for the exits after second-quarter results and guidance. There's reason to believe that reaction was overdone.

Kratos Defense & Security Solutions (KTOS 3.43%) has been a highflier so far in 2019, with shares of the aerospace specialist up nearly 75% heading into the company's second-quarter report.

Earnings came in ahead of expectations, yet shares of Kratos responded by giving up nearly one-third of their gains for the year. The issue, at first glance, is tepid third-quarter guidance and a lack of a firm update on a key military program. It's arguably also an example of investor enthusiasm getting ahead of operations. 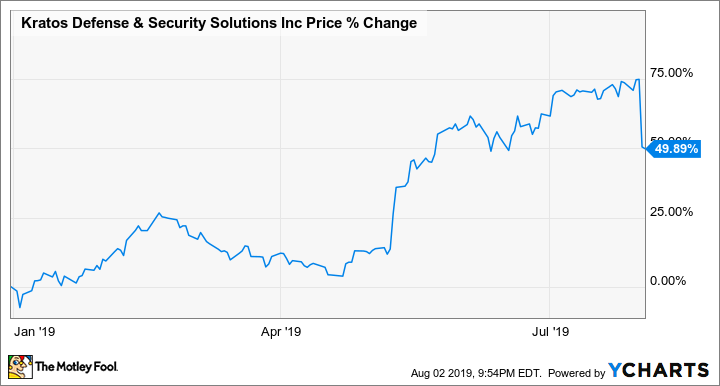 Is the Kratos rally done, or can the company's shares return to their previous altitude in the quarters to come? Here's a look at where things stand for the drone and defense electronics specialist.

A beat, but cautious guidance

Investors had high hopes heading into Kratos' second-quarter report, and by all accounts the company delivered. Kratos beat earnings estimates by $0.02 per share and revenue by $8 million, and reported total sales that, at $187.9 million, came in 24% above the second quarter of 2018.

Kratos, a manufacturer of drones, microwave electronics, turbine components, and other defense products, reported sequential organic revenue growth from every division. Profitability was aided by a more favorable product mix that featured a greater reliance on high-margin work, including in its space division.

But the earnings beat was at least partially due to certain contracts closing earlier than expected, which risks borrowing from future quarters. Kratos said it expects third-quarter revenue of between $175 million and $185 million, short of the $194 million consensus.

The company is also facing rising expenses. Kratos is in expansion mode in anticipation of some key contracts being awarded and expects third-quarter capital spending in the $10 million to $11 million range, the high for the year. That will impact free cash flow, at least temporarily, although Kratos reaffirmed its full-year cash flow guidance of $40 million to $50 million. But while investors surely were not pleased to see expenses rising and revenue at least temporarily plateauing, perhaps the biggest disappointment was something Kratos didn't say. The company is making progress testing its Valkyrie, a high-tech drone designed to serve as a wingmate to crewed aircraft to provide additional firepower and to overwhelm anti-aircraft defenses. The Air Force seems interested, but so far there are no firm orders to discuss.

The drones are in a holding pattern

The Valkyrie is airborne and performing to expectations. During the quarter, it completed the second of five planned test flights with the Air Force Research Lab. A firm order would go a long way toward advancing Kratos' drone business, for now mostly just a collection of "dumb" craft used for targeting practice, toward more advanced, lucrative missions. Following Kratos' first-quarter earnings report, CEO Eric DeMarco seemed optimistic the government would buy the Valkyrie.

Kratos did nothing to dispel that optimism in the second-quarter earnings discussion, and top Air Force officials have expressed an interest in acquiring 20 to 30 Valkyries for further experimentation, including beginning to learn how the drone could work with high-tech piloted fighters including the F-35. But the government does not move quickly.

DeMarco on the company's second-quarter earnings call focused on the platform's continued momentum, saying that as the Air Force test flights continue other, unnamed potential customers have been in contact.

One of these potential new customers recently expressed interest in acquiring up to an initial 10 Valkyries in either the fourth quarter of this year or the first half of 2020. This would be in addition to the 20 to 30 Valkyries to potentially be initially acquired by the Air Force customer. Congressional momentum and interest is also increasing. With the House of Representatives committee requesting up to a $50 million funding increase for the Valkyrie in the 2020 defense budget and a Senate committee requesting a $100 million Valkyrie funding increase in the 2020 defense budget.

Investors might also have been caught slightly off guard by an explanation of how congressional funding would trickle to Kratos' bottom line. Congress has authorized upwards of $200 million for the Valkyrie in the fiscal 2020 budget, which at a $3 million targeted unit price would imply much higher order volumes than the 20 or so planes the Air Force was said to be contemplating.

But that total likely included non-hardware expenses including integrating weapons and software systems, which, depending on how the contract is structured, could mean Kratos would not receive that full amount of revenue.

Given how far Kratos shares have come in such a short time, the post-earnings dropoff isn't a huge surprise or something that should worry investors. This remains a company on an upward trajectory, but when you are dealing with the government as a customer and reliant on significant orders to make progress quarter after quarter, some choppiness is to be expected.

Kratos unfortunately has a history of overpromising and underdelivering, and the onus is now on management to show progress on the Valkyrie program before year's end. If the company gets to 2020 without a firm order, it's possible the shares will give back most of the rest of the gains they have made so far this year.

Fortunately, I believe that is unlikely to happen. The Valkyrie is progressing to plan, and the Air Force is very interested in adding the plane to its arsenal. The congressional budgeting process added to the momentum and showed solid support on Capitol Hill to move forward with the program.

It's also important to note that Kratos is not betting all its chips on one program. There are several other advanced drone programs in development, and the company's space segment could be among the big winners from the government's Space Force push and efforts by Elon Musk's SpaceX and other commercial operators to provide internet connectivity from above.

Kratos has always been a volatile outlier in the defense sector, attracting more growth-focused investors than most slow and steady defense titans do. It's speculation on my part, but I think it's possible that a significant portion of its shareholder base is new to the defense sector and learning on the fly that government procurement can be a slow, methodical process.

Despite the post-earnings share-price drop, the bull case for Kratos is still very much intact.