Ferrari needs little introduction. The brand is synonymous with professional racing and an upscale lifestyle. Ferrari defines its own category of luxury sports cars and doesn't compete on the basis of price with mainstream automakers. In other words, investors shouldn't think of Ferrari as just any car company -- they should think of it as a luxury brand. And unlike most car manufacturers that have highly cyclical results, Ferrari's business should prove fairly resilient even in a recession.

Although Ferrari does make and sell cars, its business model is more akin to that of a luxury products company. 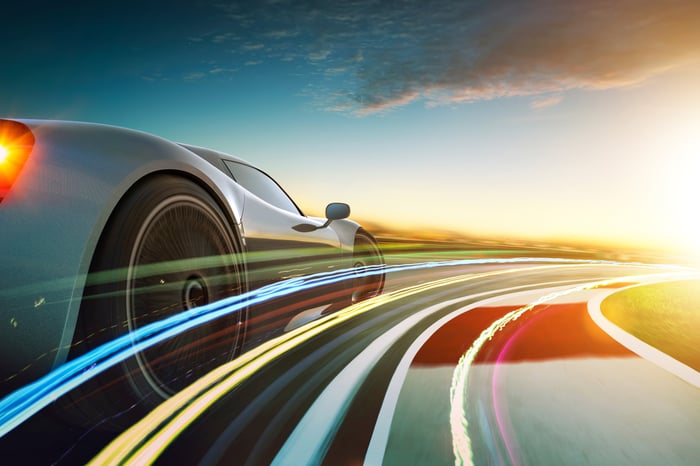 Auto manufacturers such as Ford and General Motors are in the business of mass production. Ford and GM sell millions of cars per year at prices affordable to the middle class. To accomplish this, Ford and GM have large-scale manufacturing capacity to bring their average unit costs down. However, most auto companies compete on cost and price, which results in lower profit margin due to promotional spending and inventory discounting.

On the other hand, Ferrari sells thousands of cars, not millions. On average it sells cars for hundreds of thousands of dollars each, and generally raises prices each year. Because Ferrari competes on the merits of its brand, it is able to capture much higher profit margins than a typical car company:

The company's business strategy and financial profile more closely resemble exclusive luxury products companies such as Louis Vuitton owner LVMH. At the very high end of luxury, customer demand is fairly consistent even during economic downturns. During the last global recession in 2009, LVMH saw its revenue decline by less than 1%. In Ferrari's annual report, it notes that the same demand resiliency exists in the high end of the luxury-car market.

Ferrari commands such a high price for its cars partly because they aren't easy to buy. Even if you have the cash to purchase a new vehicle, there is a limited supply. Ferrari produces a limited number of cars each year, and puts customers on a waiting list that can take as long as two years.

The waiting list is akin to an order backlog; for the most part, it guarantees a certain level of revenue growth in future years. And it gives the company strong ability to forecast its business in the medium term, since it can count on a certain level of sales from year to year. Furthermore, popular models tend to sell out quickly. Last year's 488 Pista model sold out fast, leading former CEO Sergio Marchionne to joke that people were begging to be placed on the waiting list.

The carmaker does increase the number of cars it produces each year to accommodate growing demand, but it balances increased production with price increases to maximize its revenue growth. Ferrari could probably sell many more units if it lifted its production cap. However, the company's strategy is to keep its brand exclusive and keep customers excited in order to justify annual price increases.

Ferrari has cultivated a unique space for itself in popular culture. Known for its superior Italian engines that win Formula One and other races, its brand is so desirable that the company has licensed it to a theme park and a chain of retail stores selling Ferrari-branded apparel.

Nearly as ingenious as the company's engineering is its business model, which limits production to maintain exclusivity and ever-increasing prices. The company's business model and brand strength will keep it in high demand through an economic downturn. If other investors get confused and treat Ferrari's stock like that of a cyclical auto company during the next market panic, that could be a good opportunity to make an investment in a durable business.