Netflix, Cintas, and Boston Beer are companies with businesses that are easy to grasp.

The KISS (keep it simple, stupid) principle is arguably the best strategy for investing, and some of the greatest investors ever have employed it, from Warren Buffett to Peter Lynch. 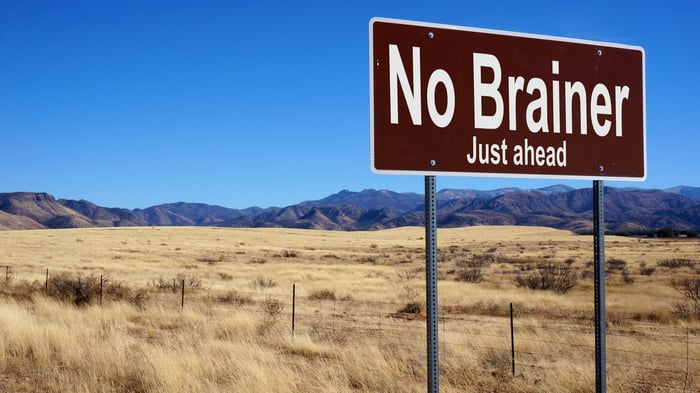 A killer stock with a simple business model

Jeremy Bowman (Netflix): If I were to make a Venn diagram of stocks that have delivered blockbuster returns and those that anyone can understand, Netflix would be smack-dab in the middle of it.

Not only has the stock surged nearly 400% over the last five years, but the company competes in just one straightforward business -- video streaming. Even better, management explains its thoughts and analysis of the business every quarter in easy-to-read shareholder letters, discussing its results and forecast, content, competition, marketing, and product and partnerships. The letters also include a clear chart of key metrics at the top.

Netflix's business model is about as straightforward as they come. It's a subscription business, so revenue as a direct function of the number of subscribers it has. That's why the company puts so much emphasis on subscriber growth, and why the stock tends to move according to the number of quarterly subscriber additions.

On the cost side, most of Netflix's expenses come from content, with marketing being the next biggest line item. Netflix considers content and marketing direct costs for the business as those are what drive subscriber growth, and it calls revenue minus content and marketing expenses contribution profit. Contribution profit is essentially the direct profit it makes from its video streaming business before more general costs like management salaries and tech infrastructure, as well as interest expense.

No one knows if Netflix stock will continue to deliver outstanding returns, of course, especially with some heavy competition entering the arena, but by making its business so easy to understand and offering the potential of market-crushing returns, Netflix is a great stock for beginning for investors.

John Bromels (Cintas): If you're looking for a business that's easy to understand, it doesn't get much clearer than Cintas. The company rents work uniforms to businesses of all types, and provides other business services as well.

Cintas' primary business is simple: It sends a delivery truck or van around to its clients' businesses. The driver picks up soiled uniforms and drops off clean ones. The service is attractive for clients because the costs and space required to install washers and dryers -- not to mention paying an employee and overhead to keep them running -- is high.

Cintas has exploited its existing business model to offer other, similar services that can still be achieved by a single delivery driver and van. They include floor mat rental, restroom restocking, first aid kit restocking, and fire and safety apparatus rental and restocking. These additional services have been popular additions and have grown even faster than the core uniform rental business. It's not hard to see why. Why pay separate companies to check your fire extinguishers and refill your paper towel dispensers when the company that's already paying you a visit once a week can do it all?

The success of this simple business model was on display in the last quarter, when year-over-year organic growth in the first aid and safety services division was an impressive 10.7%, higher than the core uniform rental and facility services segment's still-impressive organic growth of 6.8%. And not only is Cintas' business model simple, but it's also very profitable, with a 45.9% gross margin in the most recent quarter.

While upward movement in the unemployment rate would likely stunt Cintas' recent streak of growth, the company's easy-to-understand business model is a proven winner. Investors should take note.

Rich Duprey (Boston Beer): Brewing beer is as simple as combining barley, malt, and hops in yeast and water, and letting nature do its thing. Understanding how a brewer operates is equally easy: Quality ingredients go in, sales and profits come out.

While maybe not so simple as that, otherwise everyone would be doing it, Boston Beer has made tapping into current drinker preferences look so easy. It was able to popularize the craft beer phenomenon during its infancy so that its flagship Samuel Adams lager became the face of the industry, while its Twisted Tea brand of hard tea has long capitalized on the trend of hard soft drinks.

In that same way, Angry Orchard brand came to dominate the hard cider market, its Truly line of hard seltzers is quickly assuming a position of primacy in this new market niche.

Of course, it had some rough patches as consumer tastes abruptly changed and Samuel Adams declined markedly in popularity as demand for smaller, more localized beer grew. However, Boston Beer has not only stabilized its business, but it is actually growing again, even if most of the growth is coming from nonbeer alcoholic beverages these days.

Boston Beer reported reported its fifth straight quarter of depletion growth, and six consecutive quarters of double-digit rates shipment growth. Depletions are sales to distributors and retailers and are considered a proxy for consumer demand.

Although the brewer's stock has gained almost 70% in 2019, there ought to be plenty of room to run yet because beverages like hard seltzer are proving to be a trend and not a fad -- and a strong one at that. Because Boston Beer is so attuned to where drinker tastes are turning these days, it should be easy to see that its cup is overflowing with potential.