Buyout rumors are flying again around the communications tech company.

Shares of Avaya (AVYA -8.00%) traded up 11% on Tuesday after reports surfaced that the maker of cloud-based communications tools for businesses is mulling at least two competing buyout offers. Deal speculation has been circling Avaya for months now, but with the latest report, it appears that the talk is beginning to get serious.

Avaya, one of the world's largest providers of office telephone systems, has had a troubled history in recent years. The company is less than two years removed from exiting bankruptcy protection after its previous leveraged buyout, an $8.3 billion sale to TPG Capital and Silver Lake, ran into trouble in 2016. 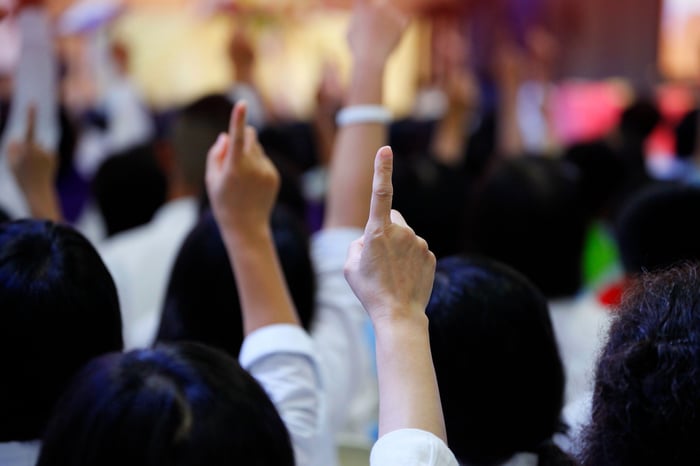 There is reportedly an auction to buy Avaya. Image source: Getty Images.

In February, the company overhauled its management team after reporting fiscal first-quarter results that underwhelmed investors. Recent quarters have shown improvement, however, and might have made Avaya a more enticing buyout target.

Reuters reported Tuesday that Avaya is considering an all-cash offer from private equity (PE) firm Clayton Dubilier & Rice in addition to a stock offer from rival Mitel Networks. According to Reuters, Avaya has been in negotiations with Mitel for months about a deal that would offer a higher valuation than what PE firms had offered, but would require Avaya shareholders to accept stock in the combined company.

Mitel last year was acquired by a group led by private equity firm Searchlight Capital Partners. According to a separate Bloomberg report, Mitel is offering about $5 billion for Avaya, including the assumption of the company's more than $3 billion in debt.

It's dangerous to trade off of deal rumors, as there is no guarantee an agreement will be signed. Reuters said that Avaya is expected to decide which transaction to pursue in the coming days, but there's still a lot that can go wrong in negotiations.

It would make sense for Avaya to find a partner. The company faces competition from heavyweights including Cisco Systems and Microsoft in its core business and has a burdensome debt load to contend with. Existing investors should hold on and hope for the best in the deal talks, but there isn't much reason for newcomers to jump on board at this point.