More than two years ago, when IAC/Interactive Corp (NASDAQ:IAC) merged Homeadvisor with Angie's List to create ANGI Homeservices (NASDAQ:ANGI), it looked like a clever move.

The media conglomerate behind Match Group, Vimeo, and other internet properties saw opportunity in creating a home services empire by combining the fast-growing Homeadvisor with Angie's List, which was popular but struggling at that time.

Despite IAC and investor hopes, that opportunity has yet to pan out. Today, the stock is hovering at a post-merger low at less than $8 a share following a disappointing second-quarter earnings report.

For risk-tolerant investors, the recent slide could present an appealing chance to pick up shares of this long-term growth play on the cheap. Let's take a closer look at where ANGI Homeservices stands today and its growth opportunities ahead to see if this stock is worth sinking your hard-earned cash into. 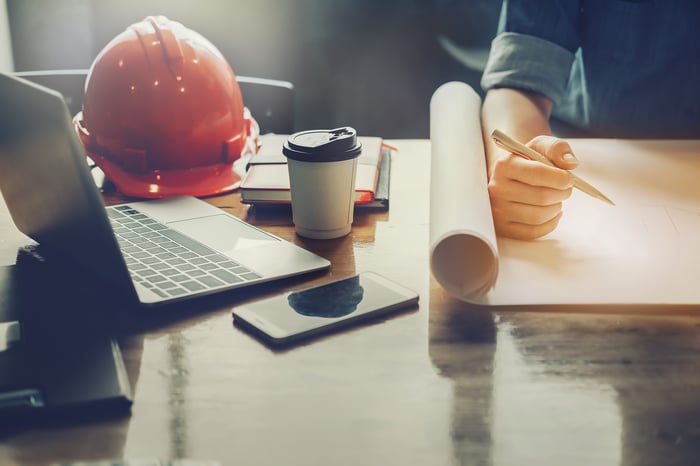 A crack in the foundation

ANGI Homeservices tumbled 25% following the release of its recent earnings report, and the stock has continued to slide from there. The stock got hammered after the company slashed its earnings guidance for the year, cutting its full-year adjusted EBITDA forecast from $280-$300 million to $200-$230 million.

Such a change in expectations may seem alarming, but the reason for the cut actually makes it seem like the market overreacted. According to the earnings call, much of the slip in profitability came from problems with the company's search engine marketing, as much of its traffic from Google came from paid ads rather than free listings. IAC CEO Joey Levin called the incident "an avoidable mistake," and said it was an outcome of focusing on other priorities, though he added that that was not a good excuse.

Selling and marketing expenses rose 38% to $196.2 million, outpacing the growth of pro forma revenue, which increased 20% to $343.9 million. However, nearly every other item on the company's expense line fell as a percentage of revenue, indicating that the underlying business appears to be getting more profitable when adjusting for the search engine marketing issue. Levin also said the problem was fixable.

Despite the setback in profitability and the challenges around Google marketing, the long-term opportunity for ANGI Homeservices is still very much intact.

The company is chasing a huge market opportunity, estimated at $400 billion, and is the category leader in a highly fragmented industry. ANGI Homeservices is also targeting 20%-25% revenue growth over the long term, and has executed on that goal in recent quarters. The company has expanded through acquisitions, including Handy and Fixd, but is also rolling out new products to drive organic growth and attract both homeowners and service providers in a rapidly changing market.

In an interview, CEO Brandon Ridenour highlighted the expansion of programs like Fixed Price, which offers homeowners a no-hassle solution to haggling over prices and receiving multiple bids. In recent weeks, Homeadvisor launched 19 new categories in Fixed Price. The company has also introduced an on-demand option it calls "Buy it Now", where homeowners purchase a service directly from ANGI Homeservices and the company outsources it to a service provider, saving the homeowner the hassle of having to find a contractor. Ridenour also said that the company's Buy It Now was a "really compelling" offer for contractors, as they have jobs sold to them directly, rather than having to negotiate with the customer. Similar to what companies like Redfin and Zillow are doing in the housing market, this initiative takes advantage of the company's knowledge of the market and pricing.

Taking a longer-term view, there are a number of catalysts working in the company's favor. As more millennials become homeowners, there should be a long tail of secular growth in online searching and hiring home service providers. The company's marketplace model comes with a number of built-in competitive advantages including network effects, it's clear that the problem the company is aiming to solve -- finding reliable and affordably priced service providers -- is an entrenched one, and the transition from offline to online will happen over a long period of time.

Considering that ANGI shares are down nearly two thirds over the last year, investors may have given up hope for the e-commerce stock, but today's price could offer a great buying opportunity for a company that looks to have years of solid growth in front of it. On a price-to-sales ratio, the stock is significantly cheaper than other online marketplaces, like Match Group and Etsy, that are growing at a similar pace.

The search marketing issue may linger for another quarter or two, but the company is making smart moves to capture a larger share of a valuable market. Considering the recent sell-off and the long-term opportunity in the home improvement market, ANGI investors could see significant gains once the company puts its current challenges behind it.