Canopy Growth may be struggling today, but investors shouldn't forget the significant growth the company has to offer over the long term.

When Constellation Brands (STZ -1.58%) announced it was investing in Canopy Growth (CGC -8.55%), there was a lot of hope that it would help give the beverage maker a good way to diversify into another industry and tap into some exciting new products that its customers can get behind as well. While there's still plenty of potential, the initial excitement has been replaced with frustration as the cannabis producer's lack of profitability weighed down Constellation's recent results.

That doesn't sit well with investors, and Canopy Growth is now in the midst of finding a new CEO after ousting its co-CEO Bruce Linton. Mike Zekulin, who was the other co-CEO now holds the title all to himself and remains on board, but only until a new leader is found.

Could the worst finally be behind Canopy Growth?

In recent months, Canopy Growth's stock has taken a beating. From highs of more than $50 earlier this year, the stock has now been cut in half. However, there's been lots of noise and controversy in the industry lately and that has contributed in not just Canopy Growth falling, but other cannabis stocks seeing big declines as well. The good news for investors is that means there are likely market and industry forces weighing the stock down rather than the decline being entirely Canopy Growth's own doing. This indicates there's a better chance the stock recovers, since the business is still relatively unchanged, as is the case in Canopy Growth's situation. 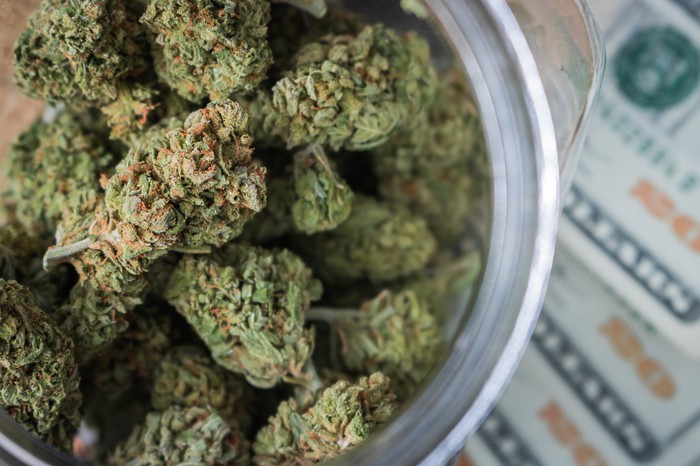 Fundamentally, the company still can achieve the growth that Constellation first expected of the company. Canopy Growth has been working on getting into the U.S. hemp market and has a deal in place with Acreage Holdings (ACRGF) as well. While it has gone through a few bad quarters and some significant changes to its leadership, the company can still rebound under a new CEO who will be more focused on the bottom line, which could lead to stronger quarters ahead. As a result, the very reasons investors might be bearish on the stock could soon be addressed.

Any turnaround will take time

Transitioning Canopy Growth into a consistently profitable company will take time, a lot of it. While Constellation may continue to experience losses from the investment, over the long term, Canopy Growth could end up contributing to the bottom line. Unfortunately, the markets tend to focus on short-term results with many investors not always looking at the bigger picture.

Canopy Growth is one of the top cannabis companies in the world and that will likely continue for the foreseeable future, in an industry estimated to be worth $130 billion globally by 2029, according to investment bank Jefferies Group. That gives Constellation a very strong asset at its disposal. It just needs to exercise patience in waiting for the stock to evolve and develop and to grab all that market share. After all, Constellation knew what it was getting into when it invested in Canopy Growth and that it would take a while before the company would start seeing results.

For Constellation investors, they just need to stay the course and trust the process. They've got shares of a top global beer maker which will eventually benefit from a top global cannabis brand as well. In the short term, there will be frustrations and temptations to dump the stock, but there could be some significant gains to be earned over the long term that they could very well miss out on by selling their shares today.

It would be a far different story if every cannabis company were posting a profit and Canopy Growth was the only one that wasn't, but that isn't the case. Although the company may be struggling today, down the road when all of the different seeds it has planted all over the world start producing results, the company will be in much better shape and a whole lot closer to profitability.