Please ensure Javascript is enabled for purposes of website accessibility
Log In Help Join The Motley Fool
Free Article Join Over 1 Million Premium Members And Get More In-Depth Stock Guidance and Research
By Keith Speights – Sep 1, 2019 at 9:00AM

Summer is winding down. But these three stocks should be hot for a long time to come.

Welcome to a new month. Kids are back in school. Football has cranked back up. Fall will soon be in the air. It's a great time to... buy stocks.

You might be thinking, "But what about the trade war with China? What about the inverted yield curve? Could a recession be on the way?" Those might be valid reasons to stay away from the stock market -- if you could accurately predict the future and if you were only investing for a relatively short term.

But you don't know what the next few months might hold. And the smartest way to invest is for the long run. That means that buying stocks right now is as good a time as any to do so. I think three top stocks you can buy in September and hold for great long-term gains are Alphabet (GOOG 3.13%) (GOOGL 3.04%), Guardant Health (GH 8.74%), and Square (SQ 11.89%). 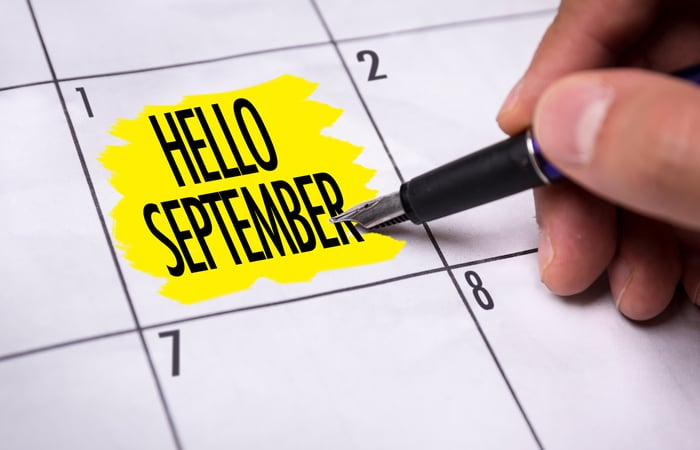 You've probably heard a lot about artificial intelligence (AI) over the past couple of years. The technology is quietly (and sometimes not so quietly) transforming how companies do business. And we've only seen the tip of the iceberg for what AI can achieve. There's no question that AI will play an even greater role in your everyday life over the next few decades. Prestigious consulting firm McKinsey predicts that AI could be a $13 trillion industry as soon as 2030.

This coming AI boom is one of the main reasons I really like Alphabet. The company is already an undisputed leader in AI. If you use an Android phone or tablet, you've probably used Alphabet's AI-powered Google Assistant. If you've used Google Search, you have definitely benefited from the company's use of AI to improve its search technology.

Bigger and better AI applications are on the way. Alphabet's Waymo is pioneering self-driving car technology. UBS analyst Eric Sheridan thinks Waymo could generate over $100 billion in revenue by 2030, not far below what Alphabet made in total last year. Alphabet's DeepMind AI lab has made significant inroads in using AI in healthcare, recently showing that its technology can predict a potentially fatal kidney disease up to 48 hours earlier than it's usually diagnosed.

Alphabet possesses three key ingredients to win in AI for decades to come, in my view. It has more money than most companies have to invest in research and development and in acquiring smaller players that make groundbreaking advancements in AI. The company has a vision for the potential for AI. Perhaps most importantly, Alphabet has access to a massive amount of data needed to train AI systems.

Every single day, roughly 10,000 baby boomers in the U.S. turn 65. Other countries around the world are also experiencing a "silver tsunami." Unfortunately, peak cancer incidence occurs in individuals aged 65 to 74. The National Cancer Institute thinks that the number of people diagnosed with cancer will rise dramatically in the near future.

The good news is that cancer can often be successfully treated if it's detected early enough. Even better news is that there's a promising new technology that can make this early detection possible. Liquid biopsy is a simple blood test used to detect cancer by identifying tiny fragments of DNA in the blood that has broken away from tumor cells. This isn't a pie-in-the-sky dream, though: Guardant Health already markets several liquid biopsy products.

Guardant Health's revenue is skyrocketing because of the tremendous demand for its Guardant360 and GuardantOmni liquid biopsy products. Physicians use Guardant360 to determine the appropriate therapy to use in treating patients with advanced-stage cancer. Pharmaceutical companies use GuardantOmni to screen patients for clinical trials evaluating cancer drugs.

The company's latest products, though, could really help make the potential of liquid biopsy a reality. Guardant Health's Lunar assays detect early stage cancer and recurrence of cancer. The company thinks that the total addressable market for its products is in the ballpark of $50 billion annually. Others think the actual number is closer to $100 billion. I'm not sure exactly how big the opportunity is, but I know it's huge -- and I'm confident that Guardant Health will grow significantly over the next several years.

Have you heard that there's a war in progress? I'm referring to the "war on cash" -- the rapid transition to digital payment methods. Credit cards, digital wallets, peer-to-peer (P2P) payments, and cryptocurrencies are growing in popularity while the use of cash is declining.

The financial industry is being turned upside down as a result of the war on cash. A handful of companies are leading this disruption, including one of my favorites: Square.

You've probably seen and use the small mobile credit card readers that Square provides to merchants. Square used its credit card processing technology and services to build an entire ecosystem for businesses, with a special focus on small and medium-sized businesses. The company also has a P2P product for individuals, Cash App, that has become wildly popular.

Square checks off all the boxes for a fantastic growth stock. It operates in a quickly expanding market. The company claims multiple pathways to generate growth, including Cash App and its Square Capital lending service for businesses. Square also enjoys a strong moat, with existing customers who have incentive to stay within its ecosystem and use even more of its products and services. I don't think cash will win the war, but I believe Square will.